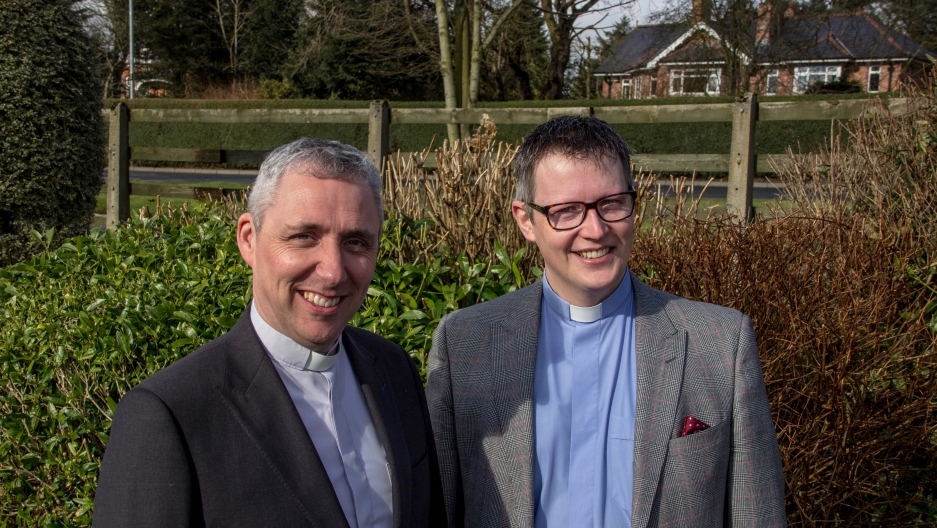 Paul Farren, who's Catholic, and Robert Miller, who's Protestant, hope their new book can get people talking about forgiveness. They say it's the only way to live in true peace.

Just say the name of the second biggest city in Northern Ireland, and you might also be revealing your sympathies.

Call it "Londonderry" and people here could suspect that you're on the side of the Protestant loyalists. And if you say "Derry," well, that's what the Catholic nationalists call the city.

In an attempt at evenhandedness, the dual name of Derry/Londonderry came about.

"The Troubles," as they're known here, officially ended 20 years with the Good Friday agreement. But the sectarian divide still runs through Derry. On the day I visited the city center in early March, there was an investigation underway at the court house. A former British soldier was being questioned (behind a curtain to protect his identity) about the shooting death of a 47-year-old Irish mother of six. The incident took place in 1971, during a British army raid in the family's neighborhood. But people here still remember.

"It's not only lived memory, this is living today," Father Paul Farren told me. He's the parish administrator at St. Eugene's Catholic cathedral in Derry.

"If someone belonging to you is murdered, you live every day without them. So, at one level it doesn't particularly matter when they were murdered. The fact is they're not here and they were taken out of your life through the action of another person and through violence," said Farren, who knows the family of Kathleen Thompson, the woman who was shot and killed all those years ago.

Archdeacon Robert Miller, a Protestant priest who leads a group of four churches in the city, also has parishioners who suffered during the Troubles. At St. Peter's church, outside of the city center, a woman told me about her niece who survived a bomb blast in a shop next to where she was standing. It took away most of her hearing.

"It's like saying, 'Right, we're a post-conflict society,' which I don't actually think is true. I think we're still emerging from that conflict," Miller said. We spoke in the parish office on a recent chilly morning. Father Farren was there too, and he was sure to make note of the conditions.

"Had we met at my church," Farren said with obvious irony, "we would be enjoying some heat."

The truth is, Farren and Miller get along smashingly. One of the churches where Miller serves is just across the street from St. Eugene's. But the two men are more than neighbors — they've become friends. And Christian collaborators, so to speak. Last year, they put out a book together called, "Forgiveness Remembers: A Journey into the Heart of God."

In one sense, the book is about one of the core teachings of the Christian faith. But in our current age of outrage — with all the Twitter fights, Facebook rants, and endless partisan vitriol — a concise piece of writing about the power of forgiveness seems quite radical.

One of the main points Farren and Miller wanted to make about forgiveness is that it's not easy.

"We would be very careful to always acknowledge that it is very difficult and very painful for some people," Farren said. "How do you forgive somebody who murdered your mother?" he asked. "How can you speak about forgiveness in that context? And yet, that's the challenge. You know, Robert would have often said, I don't know if it's his own quote or somebody else's, but it's easy to forgive when you have nothing to forgive."

Farren said it would have been strange indeed if he and Miller never bothered to get to know each other, since they are neighbors and they are both priests. But their friendship is not typical.

"I knew that I could teach Robert an awful lot of things," Farren joked, getting a hearty laugh out of Miller. "But it was going to take an awful long time to do it, so I was in it for the long haul."

Farren and Miller have an easy rapport and they tease each other constantly. They were careful to write the book in one voice.

"'Forgive and forget' is almost a paradigm that society seems to apply," Miller said. But that can take away the voices of people who've been hurt the most, he went on to say. "That's partly where 'Forgive and Remember' came from."

The core message of the book, unsurprisingly, comes from a Christian perspective. But the authors wrote it with non-religious people in mind too, because sectarianism and strife are not just rooted in religion. Tribalism and division of all kinds are rampant in today's world, Farren said. And that can make the concept of forgiveness seem irrelevant.

And this is where Farren and Miller's book can become controversial. Justice, they say, is important. And the same goes for personal responsibility. But they make the argument that the only way to live in peace is through forgiveness.

"When you forgive another person, yes, you do in a sense let them go, you don't get the eye for the eye. But you also let yourself go," Farren said. "There's a freedom for the person who forgives. And it's how to come to that realization too."

"Forgiveness is a gift to yourself," Farren said. But he emphasized that this is really hard stuff they're talking about in the book.

"If George W. Bush, after Sept. 11, had stood up and said, 'On behalf of the American people, I forgive those who did what they did,' what would the reaction be? But that's what we're called to get to."

It all sounds a bit radical, given the current zeitgeist. But these two priests hope to at least start having a conversation about it.

"When we can't forgive," Farren chimed in, "it's like living with clenched fists."

"It effects all of your life. When you forgive, in a sense, you open your fist and you're liberated and you're free. But [Miller and I] never fall into the trap of saying it's simple."