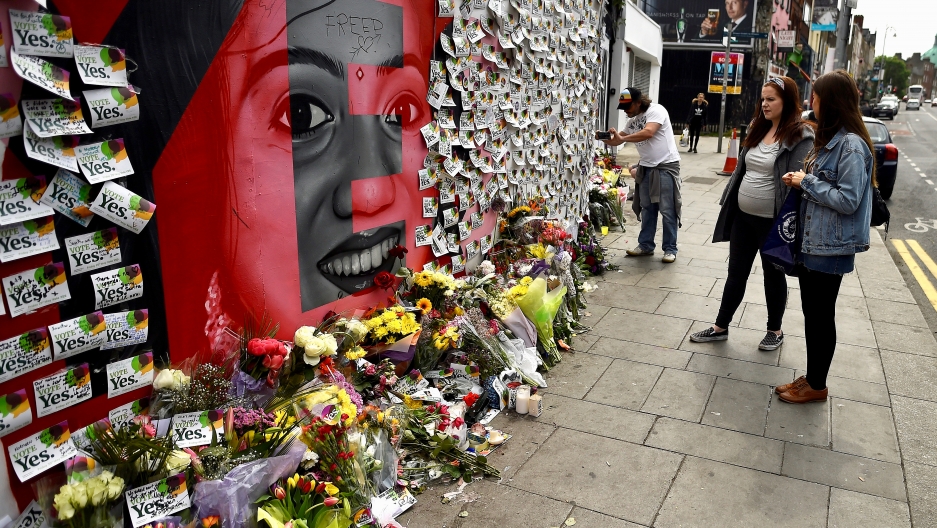 Messages are left at a memorial in Dublin to Savita Halappanava, who died from an infection after miscarrying her first child at an Irish hospital in 2012, one day after Irish voters took part in a national referendum to liberalize abortion laws on May 25, 2018.

It wasn’t even close.

Right up until the day of the vote last Friday, most observers thought the outcome of Ireland’s national referendum on abortion was too close to call. In the end, the "yes" side — voting to repeal Ireland’s Eighth Amendment, which declared the equal right to life for both the mother and the unborn — won by a landslide.

“A historic day for Ireland,” is how Irish Prime Minister Leo Varadkar characterized the results, which began to be clear on Friday night, even before the official count was announced.

“A quiet revolution has taken place, and today, is a great act of democracy,” said Varadkar, who supports abortion rights.

Related: This Irish podcaster dives into the abortion debate

“We voted for the 200,000 Irish women who've traveled to Britain since 1983 to end their pregnancies, for the couples who shared their heartbreaking stories of returning from Liverpool and other English cities with tiny coffins, for the young and not-so-young women who spoke their truth, and for those stories that still have not been heard.”

Ciara O’Connor Walsh is the host of a podcast series called, The Eighth, which covered the abortion debate and was released to coincide with the lead-up to Friday’s referendum.

“And then, I just started to cry,” she said. “That was the reaction of so many of us.”

Before the vote, the polls showed roughly a third of Irish voters in favor of keeping the Eighth Amendment, another third in favor of repealing it, and about a third undecided.

Exit interviews conducted with people on Friday suggested that many voters were swayed to vote "yes" by people they already knew and started talking with about what was at stake.

“It was women telling their stories,” O’Connor Walsh said, and not just in the media. “It was women telling their stories over dinner. It was women chatting to the people in their lives and saying, ‘Hey, when I was pregnant, this happened to me and this is why I think that the Eighth Amendment needs to be repealed,’” O’Connor Walsh said. “Or, maybe coming out and telling their family for the first time that they had to travel to seek a termination in the UK,” she said. “These kinds of conversations were quietly happening all over the country.”

Younger women in Irish cities were the biggest supporters of repeal. But every age group — except for those over 65 — voted in favor legal abortion.

When the Eighth Amendment was put in place with another referendum in 1983, Catholic leaders played a major role in getting it passed. This time around, however, was a different story. The Catholic Church largely stayed on the sidelines ahead of the referendum.

Much of the Irish public has lost faith in the church as a moral authority. The child sex abuse scandal with Catholic clergy is one reason. Then there were the revelations about abusive homes for unmarried pregnant women run by Catholic nuns.

On Irish radio this morning, Bishop Kevin Doran said that Catholics who voted "yes" in Friday’s referendum should “consider coming to confession.” Voting "yes," the Irish bishop said, was a sin.

But O’Connor Walsh said the referendum sent a clear message to Catholic leaders in Ireland. “People have made a major moral decision, a major decision of conscience, without consulting them and going against the Catholic Church’s teaching on this particular issue,” she said.

“I think the church really needs to sit back and ask themselves, how are they going to make themselves relevant again, if they can? They’re certainly not going to have as much of a place in the running of the state as they’ve had previously, and I think they need to acknowledge that.”

The archbishop of Dublin, Diarmuid Martin, seemed to do just that on Sunday. He told people at mass that the Catholic Church will be regarded with indifference in Ireland, and that the church must renew its commitment to support life.

"Pro-life means radically rediscovering in all our lives a special love for the poor that is the mark of the followers of Jesus," Martin said. The archbishop said this includes helping women in difficult situations to "choose life."

Supporters of abortion rights in Ireland say the results of Friday’s referendum will make it easier for lawmakers to move quickly to pass new abortion regulations.

There is a lot to talk about — such as who exactly will provide abortion-related services and when they can begin to be offered to the public.

The government will also need to find a way to provide for medical professionals requesting exemption from providing abortion as a matter of conscience.