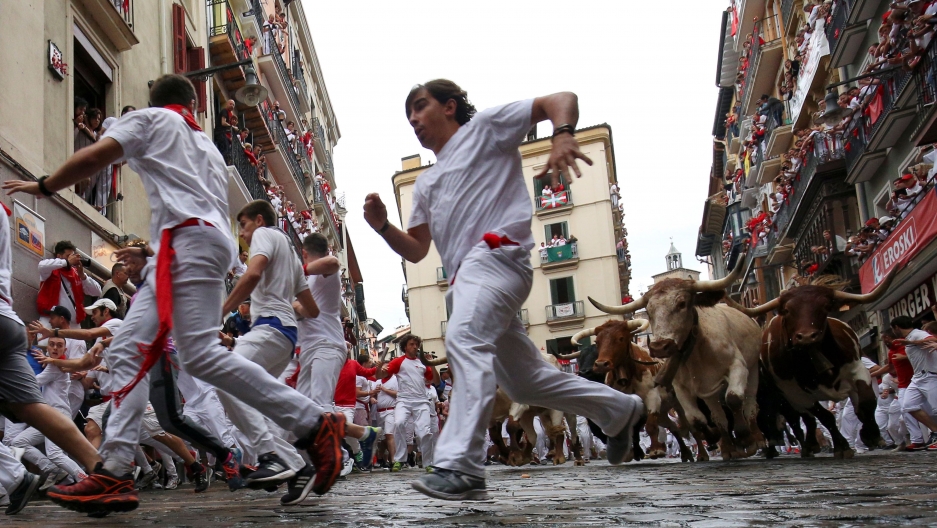 Runners sprint in front of wild cows during the Running of the Bulls festival of San Fermín in Pamplona, Spain, July 7, 2018.

It would have been a bold statement: Every year from July 6 to 14, the northern Spanish city of Pamplona becomes home to more than a million festival revelers, most of them decked out in immaculate white shirts and pants and scarlet handkerchiefs and sashes. Lasaosa herself, who’s 57 and has attended the festival for as long as she can remember, has never worn anything else.

But when women around the country suggested donning the clashing color to protest a notorious case of sexual assault — a move in league with the US’ Time’s Up campaign — Lasaosa got on board. Then, when local feminist collectives recently ruled instead to keep with tradition, she toed the line. Albeit grudgingly.

“I don’t like this idea that you can’t mess with the white because it’s tradition,” said Lasaosa, who lives in Pamplona and belongs to the local Andrea-Lunes Lilas feminist collective. “Tradition can change.” Still, she wore the uniform — even matching her lipstick and a chunky necklace to the red sash around her waist. She did, however, sport a dash of protest in the form of a purple handkerchief — Spain’s feminist emblem.

Tradition, to most women who attend the Running of the Bulls, takes on another form besides sartorial adherence to the norm. “Someone always grabs your ass or touches something else; it’s happened to all of us during San Fermín,” said Ainhoa, a 23-year-old Pamplona native with long, blond locks, sitting with a group of friends in the middle of Plaza del Castillo one night during the festival. She preferred not to share her last name.

It was close to midnight, the nightly fireworks display had just ended, and clusters of young people sat around drinking beer and calimocho, a wine and Coca-Cola mix they’d be drinking till dawn. But this year felt different, Ainhoa said. “Now, if someone tries, we’re like, ‘Don’t you even dare,’” she exclaimed, gesturing like a crossing guard.

This year’s Running of the Bulls, which concluded this past weekend, came on the heels of a highly publicized case of sexual assault and its rocky denouement: the "Wolf Pack," or "La Manada" case. Two summers ago, an 18-year-old from Madrid accused five men in their mid-20s — the so-called "Wolf Pack" (their nickname for themselves on social media) — of gang-raping her during the festival. This past April, the men were aquitted of rape and found guilty of the lesser crime of “sexual abuse” and handed a mere nine-year prison sentence each. Thousands of women throughout Spain revolted.

In June, just a few weeks before the festival’s launch, the men were released on bail, and the women took up arms once again. The ongoing protests have been called Spain’s #MeToo moment, and it has led to both social and political reckoning around how Spain prosecutes gender violence. Just last week, Spain’s new Minister of Equality and deputy Prime Minister Carmen Calvo announced the country’s penal code would be amended to redefine rape in terms of consent. The current definition — which requires “violence or intimidation” for a sexual crime to be charged as rape — gets far too many assailants off the hook, Spanish feminists say.

Seizing on the national outrage, many women suggested either boycotting the Running of the Bulls or attending it dressed in black. Pamplona feminists ultimately rejected both forms of protest, calling them detrimental to their decadeslong work to “reclaim” the festival for women.

As Magaly Rodríguez Moya, a longtime member of Andrea-Lunes Lilas feminist collective, explained, it wasn’t until 15 years ago — and after relentless petitioning — that women were allowed to join the peñas — organized “clubs” that cheer together during the bullfights and later march through the city playing music, big band style. Men run with the bulls; men bullfight. Occasionally, you might see a women engage in either activity, but that’s anecdotal, Moya said.

It wasn’t until 2014 that the city government finally decided to tackle a rampant culture of misogyny, shortly after images of women getting groped en masse went viral, said Vanesa Eguiluz, who works for the Pamplona City Government Equality office. They launched San Fermines en Igualdad (“San Fermín in Equality”), an awareness campaign whose symbol — a red hand — can be seen throughout the city, from posters plastered on buildings’ surfaces to billboards across buses.

They also created a hotline and established a protocol to deal with sexual assault cases (namely, providing legal and psychological assistance to victims). This year, they rolled out an app that allows police to geolocate users after they press a button either signaling an attack or reporting one after the fact. Not many people I spoke with had downloaded it, however.

At the plaza itself, a San Fermines en Igualdad station was set up to provide information about the campaign. When it opened at 6:30 p.m., a cluster of some 20 people had already gathered there. By the festival’s end, nearly 15,000 people had stopped by, according to municipal data.

“We offer people information about what sexist violence is, so that they can realize that some guy who won’t leave you alone in a bar or who touches your ass or who won’t let you dance in peace, that’s all sexist violence,” Eguiluz explained.

Marta Sarda, a 29-year-old Pamplona native, said she’d noticed the campaign gained ground this year, especially. “A lot of people, guys and girls, are wearing the little red hand against sexual violence. People wore them in past years, but this year, a lot more do.”

According to San Fermines en Igualdad, there were no reported rapes this year. There were six reports of “abuse” — all within the category of “unwanted touching” — for which five people were detained. Data provided for previous years start in 2012, with two counts of abuse and one of rape. The numbers for either category don't exceed two until 2016, when the numbers for abuse skyrocket to 13 and 12 in 2017.

He added that the force “gets results.” Last year, he said, “we found the alleged authors [of the crimes]. I say ‘alleged’ because later on, some were let go. But that’s another issue. I won’t get into what happens in the courts.”

To many Spanish feminists, the Wolf Pack case highlighted men’s impunity, judicially speaking. Today, the five accused are free. They must appear in court three times a week, cannot leave the country and are forbidden from going to Madrid — where the plaintiff lives. But two of the men — a civil guard and military officer — are back in active duty. This week, the prosecution’s appeal against the men’s release on bail was denied.