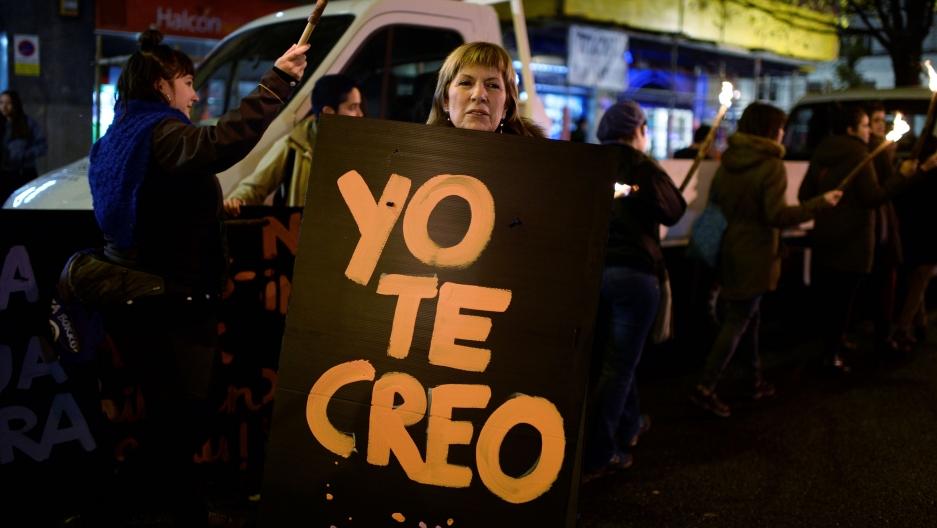 A protester carries a banner reading, "I Believe You," during a demonstration on the World Day for the Elimination of Violence against Women in Bilbao, northern Spain, Nov. 25, 2017.

On Nov. 14, a young woman entered the Navarre provincial court in northern Spain, a bottle of water in one hand, a piece of paper in the other. She sat on a chair placed at the center of the room before a tribunal and then, probed along by her attorney, recounted the events from two summers past that have dominated Spanish headlines since.

The young woman from Madrid, known only as la víctima, “the victim,” in local media, was 18 then when she alleges she was raped by five men in the early morning hours of July 7, 2016. She’d gone to Pamplona for the Running of the Bulls — the city’s celebrated and testosterone-fueled tradition of “bullfights, street dancing ... and much drinking of strong Spanish wine,” as immortalized by one American superfan.

According to her testimony, she’d lost sight of the friend she’d traveled with and ended up making her way toward the car, which they'd planned on spending the night in. When a group of five male friends from Seville, strangers to her until then, struck up a conversation and suggested accompanying her to the vehicle, she accepted. At some point while they twisted their way down the dark streets, they led her to a doorway, pulled her in and took turns raping her, she said. When they’d finished, they seized her phone and left. After some time, she got dressed, sought help and reported the rape. It was only later after she’d pressed charges, and a trial was underway, that she discovered the men had filmed the act on their phones and shared the videos in their WhatsApp group.

The meat and bones of the retelling over, Navarre district attorney Elena Sarasate suddenly veered into new territory. “You seem to be a pretty social and extroverted young person,” she stated before the tribunal. “Do you usually post on social media?”

What would appear to be an unusual turn in the woman’s testimony — her social media habits — has become the crux of the case known as La Manada, or “The Wolf Pack,” after the five accused men’s WhatsApp group name. In a bid to prove the young woman was not raped but consented to having group sex, the men’s defense hinges on proving she did not suffer any trauma following the sex act, which they’ve chiefly done by presenting social media posts showing her out with friends, knocking back a few drinks, or sharing content of an ostensibly sexual nature.

To the prosecution and feminist collectives the country over, the defense’s tactic is an age-old trope with new technological trappings — an updated version of “She was asking for it because she wore a miniskirt.” For the defense, it’s a necessary method designed to reflect the plaintiff’s psychological makeup. The trial ended in late November, and a verdict is still pending. If found guilty, the accused could each face up to 25 years and nine months in prison. The decision will have far-reaching implications. How much can social media reflect a person’s psychology or establish a motive? And should that content be admitted in a court of law?

Much of the defense’s evidence was obtained by a private detective who covertly photographed the plaintiff over the course of several days, two months after the alleged crime. The detective’s report also contained a number of the plaintiff’s social media posts. Though the report was ultimately withdrawn by the defense — possibly due to the public outcry it generated — one piece of evidence was kept and became the defense’s pièce de résistance. It’s an Instagram post she was tagged in featuring a T-shirt emblazoned with the words, “Hagas lo que hagas, quítate las bragas,” meaning, “Whatever you do, make sure you take off your underwear” — a famous quote from one of the contestants on the Spanish "Jersey Shore" spinoff, "Super Shore."

“That someone who’s presumably suffered sexual assault would post, ‘Whatever you do, take off your underwear,’ on social media just days before giving her testimony in court, well honestly, that doesn’t seem like a trivial fact that shouldn’t be analyzed during the proceeding, to determine the plaintiff’s profile as well as to determine the existence of post-traumatic stress for which she’s asking a lot of money in compensation,” Agustín Martínez Becerra, one of the defense lawyers representing three of the accused, told PRI.

Social media content can be used as evidence to determine whether some sort of monetary compensation is legitimate, he said. “What’s curious is that while there have been efforts to invalidate this piece of evidence, which seeks to prove the absence of post-traumatic stress, there’s been no mention of the fact that neither the plaintiff nor the prosecution have provided any document or any testimony proving the existence of any treatment that could prove the existence of this condition,” Becerra added. “Undoubtedly, because there hasn’t been any treatment of this kind.”

Becerra claims his defense is bolstered by an inconsistency in the plaintiff’s testimony: Though she stated she was unaware the men filmed her at the time of the rape, a police witness told the court she’d mentioned the videos when she reported the rape. Latching onto that, the defense argues the young woman must have consented to having group sex and only cried rape later after growing concerned the videos would be leaked.

Elena Sarasate, the plaintiff’s attorney, declined to comment until a verdict is reached. But human rights lawyer Carla Vall, who is not involved in the case but has spoken to local media about it, argues the plaintiff’s psychological state is beside the point. “It’s a perverse idea that’s being transmitted [by using the Instagram post as evidence]: that a woman who enjoys her sexuality can’t be raped,” she told PRI.

“[Social media] gives us little information. In general, we only post what’s popular: happiness, trips, interpersonal relationships ... what makes us feel good and shows positive interactions with others,” Vall added.

“That she had a drink with her friends or went out partying doesn’t mean she’s not experiencing any aftereffects. Besides, there can be a crime and no trauma; each woman has different psychological and emotional reactions.”

Similarly, human rights lawyer Violeta Assiego questioned the use of social media as evidence due to its subjective nature. “Pictures that are posted on social media need to be interpreted. Obviously, if there’s a theft and a picture captures it, that’s proof of a crime. But a picture of a person with their family, at the beach or wearing a T-shirt can’t provide any proof because it requires an interpretation,” she said. “In my opinion, this isn’t an issue of where to put the limits on social media, but where to put the limits on invading a person’s privacy.”

If dissecting the plaintiff’s social media habits unfairly puts the victim on trial, as Assiego, Vall and many others say, the reverse is not true for the accused who’ve been spared the same scrutiny, they argue.

While the tribunal admitted the defense’s social media evidence, it rejected the prosecution’s attempts to present the accused men’s WhatsApp group conversation prior to the alleged crime, in which they discussed drugging women to have sex with them during the festival.

Becerra says the messages weren’t admitted because they were exchanged before the alleged crime. “The tribunal understood that the conversations held by my clients prior to the event lacked legal relevance,” he said.

To Vall, it comes down to the Spanish approach to criminal law, in which the defense faces a bigger “margin of evidence” to prove an accused person’s innocence. However, she believes that unlike the plaintiff’s social media posts, the men’s conversations do provide a window into their psychology.

“If the accused post material that is chauvinistic, misogynistic or that normalizes violence against women on a social network, despite the fact that most people typically only post popular things, then yes, that’s relevant because it shows us how they see the world and how they see women,” she said. “Social media can give us information about an aggressor's motive to commit a crime.”

Further complicating matters, of course, is how we define WhatsApp, which some argue is a private messaging app and not a social network.

“If the accused post material that is chauvinistic, misogynistic or that normalizes violence against women on a social network, despite the fact that most people typically only post popular things, then yes, that’s relevant because it shows us how they see the world and how they see women.” — Carla Vall, human rights lawyer

The lack of norms and regulations regarding how deeply individuals’ social media presentations can be probed makes sex crimes in the social media age nebulous territory. Some legislators have decided to take matters into their hands: One Spanish senator, for instance, presented a motion in November to reform the legal regulations surrounding private investigations to “safeguard citizens’ dignity, right to honor and privacy.”

Pamplona’s Running of the Bulls is just one of the country’s cultural staples bathed in notions of bravado and virility, many feminist collectives say. “The Manada case is emblematic of the festival’s macho violence,” Lilith Feminista, a local feminist collective, said via email. The collective’s latest initiative to address the festival’s machismo was a Twitter campaign last July denouncing the sexually violent nature of merchandise for sale, such as shirts, hats and pins inscribed with such messages as, “Blow me and shut up” or “Either we all fuck or we throw the bitch in the river.”

Cases of assault are so commonplace, in fact, the collective is concerned the sensational coverage the Manada case is receiving draws attention away from the systemic nature of sexual harassment and abuse. They nevertheless took to the streets along with thousands of other women on Nov. 17 to decry the defense’s use of the Instagram post. The words, "I believe you," have shown up throughout Madrid and on social media in support of la víctima while a number of politicians, including Barcelona Mayor Ada Colau, also voiced their indignation.

“This case transcends the courts; it’s a societal debate about our everyday relationships, how we relate to each other, how do men experience sexuality,” Vall said. “This sentence will mark us for many years and will crystallize notions regarding sexuality, consent and desire.”