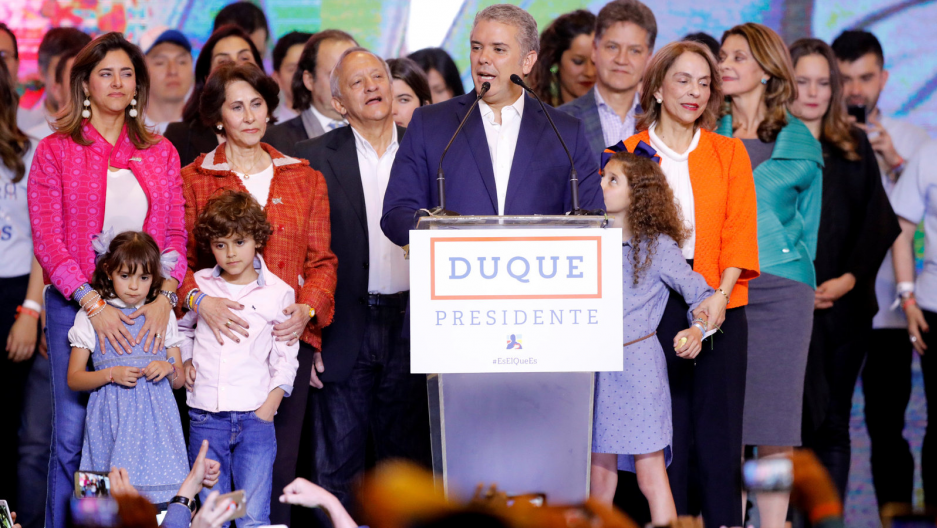 Colombia's President-elect Iván Duque has promised to unite a divided country behind his plans to toughen a peace accord with Marxist rebels and to rekindle economic growth, but he will face major challenges when he takes office in August.

The right-wing former senator comfortably won Sunday's election with 54 percent of votes against his leftist rival Gustavo Petro, who garnered 42 percent with his pledge to shake up Colombia's economic model and tackle inequality.

Market reaction to Duque's victory is expected to be muted because he held a strong poll lead going into the election and investors are largely supportive of his business-friendly economic policies.

It was the first presidential election since a 2016 peace deal with the Revolutionary Armed Forces of Colombia (FARC), which ended its part in a five-decade conflict that has killed more than 220,000 people and displaced millions.

Duque, 41, pledged in his victory speech to unite the polarized Andean country and tackle corruption, to improve security and increase educational opportunities.

"Peace is something all Colombians yearn for and peace means that we turn the page on the fissures that have divided us," Duque told cheering crowds at his celebration party in Bogotá as confetti rained down.

Related: Despite accord, peace in Colombia is tenuous as country heads to runoff election

Duque, a protégé of hard-line former President Álvaro Uribe, won fame railing from Congress against the peace deal — which he believes is too easy on former rebel leaders.

Striking a conciliatory tone on Sunday, he promised to press ahead with implementing the disarmament and reinserting ordinary rebels into Colombian society.

His aim of revamping the agreement to impose tougher punishments for war crimes on FARC leaders will face considerable opposition from the Constitutional Court and Congress, where most parties favor implementing the existing accord.

"He is going to have a harder time passing reforms to the peace agreement than he would have his supporters believe," said Sergio Guzmán, Control Risks' lead analyst for Colombia, singling out the Constitutional Court, which has already ruled that the deal cannot be changed.

Related: In the diaspora, Colombia’s presidential election is as much about the past as the future

Duque needs to include politicians from centrist parties in his cabinet if he wants to unite the country, Guzmán said. He is likely to reveal the names of some ministers this week.

Only 19.3 million people, just over half of eligible voters, participated in the election, suggesting some centrists preferred not to vote for either choice.

Duque has promised to bolster Colombia's $324 billion economy via tax cuts and support for extractive industries such as oil and coal, the country's top exports. The government expects the economy to grow 2.7 percent this year.

"From an economic point of view, Duque's victory is reassuring," said Carlos Sepúlveda, the dean of economy at Rosario University. "It creates a positive panorama for the Colombian economy, although there will be a lot of challenges in the months ahead."

Some economists have raised concern that Duque's proposed tax cuts may worsen the budget deficit and force him to push through unpopular reforms, including a pension overhaul, to preserve Colombia's investment-grade credit rating.

Duque has said he will curb attacks by remaining leftist rebels on pipelines and invest in state-run oil company Ecopetrol's refineries to allow exports of more higher-value derivatives.

Related: In the Colombian Amazon, peace has environmental consequences

Although Petro, a former M19 rebel, won a majority in only eight provinces and the capital Bogotá, the fact a leftist got 8 million votes — versus 10.3 million for Duque — is historic in traditionally conservative Colombia.

The fractured left has failed for decades to come close to winning Colombia's presidency, overshadowed by right-wing contenders who promised security. Yet the FARC deal has shifted priorities for many of Colombia's nearly 50 million people.

"If Duque is not able to get moving on his promises and to see concrete results, and if he doesn't look for reconciliation, the left could win in 2022," said Andrés Pardo, head of investment holding company Corficolombiana.