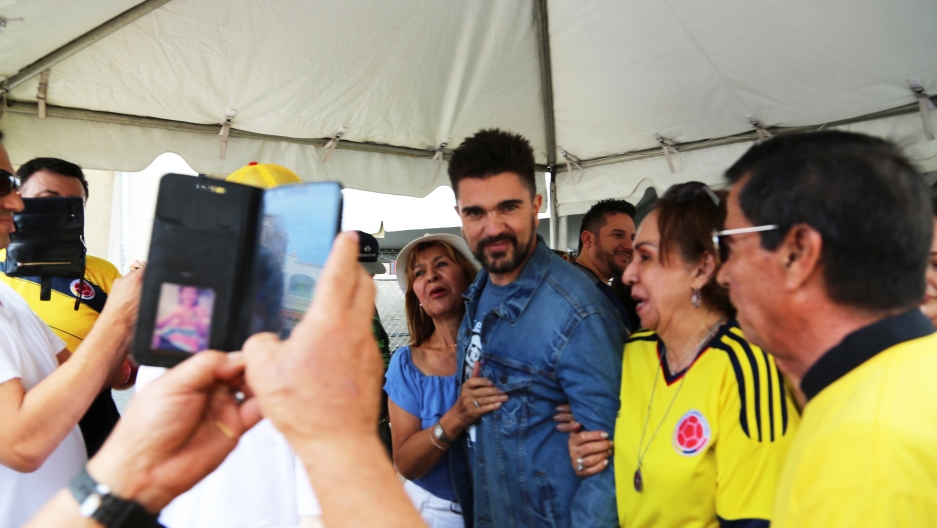 Colombian music star Juanes stopped by the Colombian consulate in Miami-Dade County on June 12, 2018 during early voting for Colombian nationals in the US. The presidential election in Colombia is on June 17.

Voting for the next president of Colombia looks deceivingly festive outside the Colombian consulate in Coral Gables, a city in Miami-Dade County, Florida.

Colombians usually have notoriously low voter participation rates, both in Colombia and in the US, but this election has seen a rise in turnout. About 53 percent of voters participated in the first round of presidential elections, according to the National Civil Registry.

On Tuesday, Colombians turned out to cast their ballots in the runoff for the presidency. No candidate won more than 50 percent of the vote in the first round last month.

People hugged and chatted before and after voting. Many wore their World Cup yellow soccer jerseys and sipped coffees from the Colombian coffee shop next door. They took selfies together in front of a large yellow, blue and red Colombian flag on a white voting tent next to the consulate.

Colombian music star Juanes showed up to vote about 1 p.m. and the selfies turned into a frenzy.

The issues involved in this election, though, are serious. The race is between two candidates with very different ideas for the future of Colombia. Election day in Colombia is on Sunday, and voters in the diaspora can cast their ballots at consulates and other designated locations in the week before the official election. All Colombian citizens who registered their Colombian identity card, or cédula, by the March 2018 deadline can vote in this election, even if they have dual citizenship with other countries. 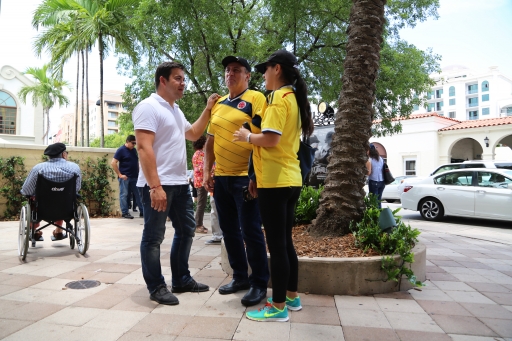 Ernesto Parra and Erica Parra, in yellow jerseys, are Iván Duque supporters who came out to vote outside Colombia's consulate in Miami-Dade County on June 12, 2018. They're speaking with Colombian Congressman Juan David Vélez, who represents Colombians in the diaspora.

The majority of Colombian voters in Miami support the frontrunner, Iván Duque.

He’s a lawyer who worked at the Inter-American Development Bank in Washington, DC, for many years. He returned to Colombia to serve one term as senator from 2014 to 2018 and now he hopes to replace current President Juan Manuel Santos, who signed a controversial peace treaty in 2016 with what used to be the Fuerzas Armadas Revolucionarias de Colombia, or FARC. Until the signing of the accord, it was Colombia's largest guerrilla group. Now, the FARC is a political party called Fuerza Alternativa Revolucionaria del Común.

“It’s not surprising that Duque won handily the Florida vote during the first round and it’s probably likely that he will win the vote in the second round here in Miami certainly,” says Eduardo Gamarra, a professor at Florida International University who specializes in Latin American politics and the Latino vote. In the past he's done polling in Colombia and on May 17 he moderated a debate at his university in Miami, organized with the Colombian American Chamber of Commerce and featuring representatives of the candidates running for president.

“My sense is that Colombians in exile are concerned about the return of insecurity,” Gamarra says. “They believe that Santos handed over the country to the guerrillas and that's such a predominant point of view here, and it's one that's reinforced by recent arrivals.”

The 2016 peace treaty officially ended 50 years of conflict in Colombia and included concessions to the new political party. FARC members can now run for congress and for the presidency, for instance, a sore issue for many Colombians. They may also perform labor for their crimes, like removing landmines, instead of serving lengthy prison sentences.

Duque wants FARC members convicted of crimes to spend time behind bars before reintegrating into society. His opponent, Gustavo Petro, supports the treaty and was himself a member of another militant group, M-19, that disarmed in 1990.

“It’s like to compare heaven with hell,” says Ernesto Parra, a Duque supporter who left Colombia 20 years ago and lives in Miami. “[Petro is a guerrillero. He has a very dirty past. We don’t want him in Colombia. We are ashamed that he is candidate for Colombian president.”

Petro served a term as Bogotá mayor until 2015 and has not been accused of violence during his M-19 years. His affiliation, though, reminds Parra of why he left Colombia in the first place.

“I had problems there with bad people in Colombia. They blackmailed me, they threatened my sons, my family and it was impossible to live there,” he says. “So I made the decision to move to the United States, because here we have peace, we have tranquility and I can work here for Colombia better than over there. I love my country.”

Parra wore the yellow Colombia national soccer team jersey when he went out to vote.

Colombians make up the largest percentage of immigrants from South America to the US. In 2014, they numbered 707,000, or 25 percent of South American immigrants, according to the Migration Policy Institute.

The largest population of Colombian-born people in the US, more than 92,000, live in Miami-Dade County.

Rochy Gomez came to the US 25 years ago. Before Florida, she lived in New Jersey for 16 years. She came to the consulate at 8 a.m to vote and talk to people willing to listen about supporting Duque. She stood around until early afternoon, though she was in pain from a recent accident.

“I came like that, with the pain in my arm that goes down to my waist, but I said, ‘I have to go campaign because my country comes first,’” Gomez says. “I tell Colombians, ‘I live in the United States, nothing will happen to me, but you all who are there, that pains me the most.’ I wouldn’t want that, even though I’m better off in the United States.”

She says the economic collapse in Venezuela is a reason to vote against a leftist candidate.

“All of Venezuela is in Miami right now — the ones who could leave, the ones with money,”  Gomez says. “Who remained? The poor, eating garbage. They don’t have medicine, children are dying. We don’t want that to happen to our country. Here, none of us are communists. Why? Because we all lived in Colombia during that bad time.”

Being right-wing in Colombian politics means being tough on security, on the FARC and other guerrilla groups still armed like the ELN, or National Liberation Army, explains Brian Winter, the editor-in-chief of Americas Quarterly magazine and the vice president for policy at Americas Society/Council of the Americas.

He says, however, that “there tends to be this misperception in the United States that Colombia was still immersed in a civil war until the peace process was signed, and that’s not true.”

The civil war in Colombia was the longest running internal conflict in the western hemisphere — roughly 52 years until 2016. The conflict was mainly fought between the FARC and the Colombian government. Originally, the guerrillas banded together under a communist ideology to get land for poor people like farmers, and they were reacting to Colombia's massive inequality between rich and poor. Their tactics used to include bombings, hijackings, assassinations and kidnappings, but in recent years that largely ceased.

Clara Vela in Miami says she’s grateful that Santos managed to make the cessation of violence official by negotiating with the FARC.

She worked as a dentist for decades in Colombia and followed her children to the US six years ago.

“I have no doubt that I support Gustavo Petro,” Vela says. “The act of negotiating with a guerrilla that had a possibility to continue its fight is something I will always thank President Santos for — his political will to sign a peace treaty. For me there was no doubt I would support the candidate who supports the peace treaty, so I chose Gustavo Petro.”

She says that Petro’s vice presidential candidate is an outspoken feminist and that they’re with a party called Colombia Humana, or Humane Colombia. His platform’s main points include environmental protection by getting by making Colombia less oil-dependent. He wants to build up renewable sources like solar energy.

Vela also points to his record on animal rights, such as his ban on bullfighting in the capital during his tenure as mayor of Bogotá. In that time, he also retired hundreds of horses that were used to collect waste on the streets of the city.

“At this point, voting for the other person is taking a terrible step backwards,” Vela says. “For me, Petro’s proposals are about hope, not fear.”

Experts in Miami, though, say the majority is voting based on what they remember Colombia was like in the 1980s, '90s and early 2000s.

Most Colombians immigrated to the US during the '80s and '90s, according to the Migration Policy Institute.

Duque's supporters credit his mentor, Álvaro Uribe, with making Colombia safer. Uribe was president of Colombia from 2002 and 2010. He’s now a senator and a close ally of Duque. Although Uribe reduced the numbers of guerrilla fighters and of kidnappings, critics say he’s at fault for the deaths of many civilians, and his administration is accused of human rights abuses and corruption.

Gamarra, at Florida International University, says that’s not a main concern for Colombians in Miami, and not because they’re insensitive. “They're not concerned that Uribe was a bad guy. What they're concerned about is the fact that Colombia became that country where the greatest risk was that you wanted to stay,” Gamarra says.

A government tourism campaign launched in 2008 — with the slogan, “Colombia, the only risk is wanting to stay” — got a lot of attention. It was a play on the risk that used to keep tourists away, but during Uribe's presidency the violence dropped significantly enough to lure tourists back.

Many Colombians have not returned, though, and leaving was never easy.

“Colombians love their country, and if they’re living abroad it’s painful for them,” Winter says. “The reason most people left is because of security and violence and so the expatriate community is very likely to vote for a candidate who promises security and, hopefully in their mind, paves the way for them to maybe one day want to go home.”