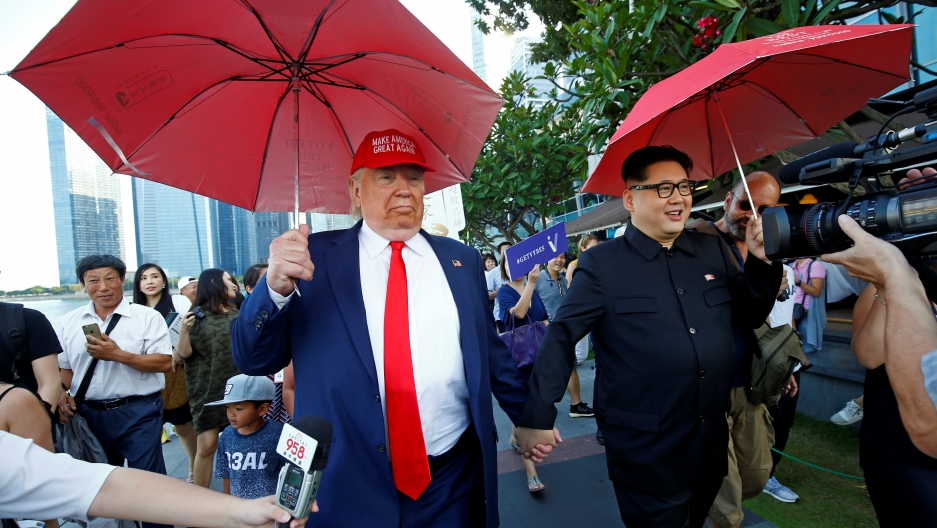 The city-state of Singapore is preparing to host a much-hyped summit between US President Donald Trump and North Korean leader Kim Jong-un on Tuesday.

Local speculation about where, exactly, the summit would be held was resolved this week. The two men, and possibly South Korean President Moon Jae-in, will hold talks at a swank hotel on Sentosa, an island resort just off the mainland that also features a water park, a Universal Studios theme park and a casino.

And that’s more or less where the excitement ends for many Singaporeans. If you imagined there’d be a buzz in the air leading up to the on-again, off-again meeting that’s dominated headlines for weeks, you’d be mistaken. By all indications, this is a bit of a snoozer for the local population.

Wu, sitting for an end-of-the-day smoke outside Raffles Place, a large public square downtown, seems to typify many Singaporeans’ attitudes toward the summit. “I mean when they first come out with the news: ‘Oh wow, oh yeah, they are doing it here,’” the 42-year-old said. “That was for maybe a minute or so. Then we move on with our life.”

Singaporeans may not be thrilled, but some said they were proud their home had been chosen to host the Trump-Kim summit. Singapore has earned a reputation as an honest geopolitical broker, and this isn’t the first time it’s hosted an historic international meetup. Back in 2015 it was the site of a meeting between then-Taiwanese President Ma Ying-jeou and Chinese President Xi Jinping — the first meeting between leaders of Taiwan and China since 1949.

“It puts Singapore in an international limelight that Singapore is a country that is safe, that is good at mediation, that it’s neutral, it’s objective,” said 33-year-old Phillip, who was also having a smoke at Raffles Place. “I think that this puts Singapore in a good spotlight.”

According to Tan Dawn Wei, the deputy foreign editor at the Straits Times, it’s in the country’s foreign policy DNA to be impartial because it’s such a small country. Singaporeans refer to their own nation as the Little Red Dot. It needs to keep its friends, so neutrality is something of a survival instinct.

“And it’s got this reputation for a high degree of public order,” Tan said. “Public protests are not allowed. It’s illegal to go out on the streets and picket.” She also noted that the subject matter of the talks wasn’t highly relevant to people there. “I think people kind of watch it as like a show,” she said. “It’s like a reality TV show that they consume on social media or TV.”

Tan says Singaporeans are much more concerned with issues happening around Southeast Asia than with what’s happening on the Korean Peninsula. The high cost of living is the big topic of discussion, and how Singapore is going to handle population growth as such a small island.

Related: Kim Jong-un's next summits will apparently be with Vladimir Putin and Bashar al-Assad

Even if many Singaporeans aren’t keeping a close eye on the summit, there’s one aspect of Trump and Kim’s visit that seems to be on everyone’s radar: the headaches it’s likely to cause.

Jackie rolled her eyes as she contemplated the summit while sipping on an iced drink outside a cafe. “Well one thing I think about is … the security is going to be tight,” the 40-year-old said. “They’re going to close off roads, we need to detour. It’s all inconvenience.”

But she hastened to add that maybe she should be paying more attention to the international headlines in her backyard.

“Yeah, I feel very shallow to be honest, because it is important,” she said. “I mean, it’s quite big, right?”