Just months ago, Kim Jong-un stood alone as the international community lambasted him with economic sanctions. Now, leaders around the world are practically lining up for face-to-face chats with the North Korean leader, who may soon shake hands with Russian President Vladimir Putin and Syrian dictator Bashar al-Assad in two separate meetings.

North Korean state media announced on June 3 that Assad will meet Kim in Pyongyang, though it’s unclear when that meeting will happen or whether Assad himself has confirmed it. Russian state media reported Monday that Putin had invited Kim to attend a summit in Vladivostok, Russia, this September. Again, no exact date is set.

Neither meeting is surprising — Russia and Syria maintain a longstanding alliance with the Kim regime — but the timing is a bit unusual, if not perplexing. Kim is supposedly eager to broker a deal with US President Donald Trump this June 12 at their on-again, off-again Singapore summit, and yet he let planned meetings with two US adversaries come to light just days ahead of it.

Related: For South Korea's president, the canceled Trump-Kim summit is an embarrassing mess

“It’s a bit bizarre. I wish I could tell you what’s happening,” said Jenny Town, managing editor of 38 North, a news and analysis website on North Korea, and former assistant director of Johns Hopkins University’s US-Korea Institute. “It’s really amazing how much Kim Jong-un’s reputation has rehabilitated in such a short period of time — to go from having been the world’s most hated leader in December to having everyone fighting for a meeting with him now.”

It’s unclear whether North Korea’s meetings with Putin and Assad are related. But both occasions, no doubt, would be in the spirit of solidarity between authoritarian regimes.

North Korea’s allies “tend to have strong governments, dictators and a somewhat an anti-Western stance,” Town said. “[They’re] willing to buck the system … North Korea has good relationships with lots of countries with dictators. Their foreign relations are broader than what people like to believe.”

It’s true that Russia, North Korea and Syria have all found themselves increasingly surrounded by ideological enemies. However, their relationships with each other go back several decades: Russia backed North Korea during the Korean War from 1950 to 1953, then provided aid and military equipment for decades thereafter (technically, the Soviet Union and the United States drew the dividing line through the Korean peninsula in 1945 after they “liberated” it from Japan — then North Korea, with permission of the Soviet Union, invaded South Korea to “reunify the peninsula” in 1950). As for Syria, look no further than the museum murals of Kim Il-sung and Hafez al-Assad in both Pyongyang and Damascus. There’s a park in Damascus named after Kim Il-sung, too.

“Kim Jong-un’s grandfather, Kim Il-sung, [was] a good friend of Assad’s father,” said Jang Ji-hyang, Seoul-based director of the Middle East and North Africa Center at the Asan Institute for Policy Studies. “I’ve heard that the Syrian presidential palace in Damascus has a huge picture of the two holding hands together. They’re more than just an official alliance — they’re actual friends.” 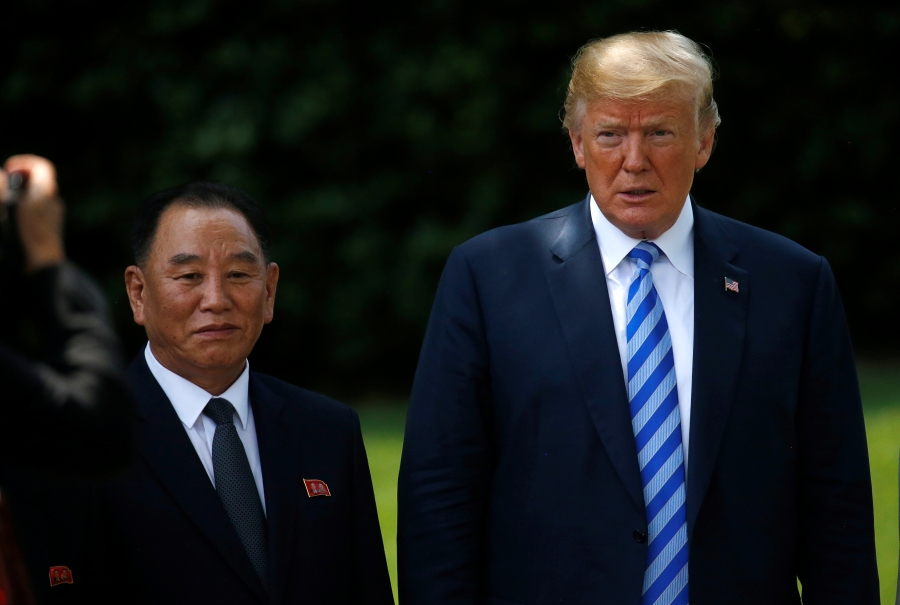 North Korean envoy Kim Yong-chol, the country's former spy chief and current vice-chairman of the Central Committee of the Workers' Party of Korea, poses with President Donald Trump after a meeting at the White House in Washington, DC, June 1, 2018. Kim Yong-chol is the most senior North Korean official to visit the United States in nearly two decades.

North Korea is thought to have supplied Syria with materials that can produce chemical weapons. They also helped Syria build a nuclear reactor (which Israel claims it destroyed in 2007) and supplied technicians to Syrian chemical weapon and missile facilities, a recent United Nations report stated. In some ways, the relationship makes sense: both Kim and Assad assert their power at home with atrocious human rights violations. An estimated 80,000 to 120,000 people are currently imprisoned in North Korean concentration camps, for example, and Assad has used chemical weapons to kill thousands of his own citizens.

“North Korea has strong ties with Russia, China and Iran as well, but those three countries don’t have a personal, hereditary dictatorship. Only Syria does,” Jang said. “[North Korea and Syria] must have a tighter and deeper personal relationship because their ideology is somewhat similar. Collective, one-party leadership is quite different than a hereditary regime.”

Experts can only guess why North Korea would announce a contentious meeting with Assad just days before meeting Trump in person. The move is somewhat uncharacteristic of North Korea’s recent charm offensive, which has so far worked wonders for Kim Jong-un’s public image among South Koreans.

“I don’t think this meeting helps Kim Jong-un in any way. He has been trying to soften his image, not harden it,” said Daryl Kimball, executive director of the Arms Control Association and a researcher of nuclear disarmament for more than 25 years. “To meet with Bashar al-Assad, who is a war criminal and a chemical weapons user, only reinforces the idea that the North Korean regime doesn’t have many friends.”

“There’s a chance that it could also mean nothing, but I don’t think so,” said Peter Ward, a Seoul-based columnist at NK News and a former researcher at the Asan Institute for Policy Studies. “This could be considered a calibrated message to the outside world that says, basically, ‘We’re prepared to talk and have constructive conversations, but that doesn’t mean we’re capitulating in masses, and we still have our alliances and our old interests.’”

According to Ward, it’s possible that Kim Jong-un’s invitation to Assad is a signal to Putin that North Korea is supportive of Kremlin associates (Russia conducted several airstrikes for Assad over Syrian rebel territory). Kim’s recent meeting with Russia’s foreign minister and potential future meeting with Putin may also be an attempt to build leverage against the United States — or garner much-needed foreign investment dollars to develop North Korea.

“If Kim Jong-un and Trump sign a symbolic agreement, then great,” Ward said. “But if things don’t go well, then [North Korea] probably wants to split the united front that has existed in the UN Security Council for the last two to three years. They want the Russians and the Chinese to peel off [of sanctions] and say, ‘This is a crisis of Trump’s creation now, not ours.’”

From Russia’s perspective, meeting with Kim for a high-level talk could help ensure that Russian interests are not forgotten during any future nuclear talks. Russia may also be seeking to invest in North Korea, whose foreign relations have looked more stable in recent months.

“Russia does have strategic interest in North Korea — especially economic interest,” Town said. “For years, they’ve wanted to do a pipeline project and connect the railroads to have better access to South Korean markets and to get out to the sea.”

But does any of this affect the upcoming summit between the US and North Korea? So far, it doesn’t seem so. Trump has yet to respond to news of Kim’s potential meeting with Assad, and plans for June 12 appear to be moving forward.

“I don’t think this is going to have a direct effect on the summit,” Kimball said. “I do think it’s a reminder of one of the risks that we face if we cannot move North Korea away from nuclear weapons — away from proliferating their nuclear weapons program. The risk is that North Korea might [bring] their technology to states like the Assad regime.”