Trump supporters hold placards against MS-13 as New York Police stand guard at the street during a forum about the Central American-based Mara Salvatrucha (MS-13) gang organization at the Morrelly Homeland Security Center in Bethpage, New York, on May 23, 2018.

President Donald Trump warned on Wednesday he was working on a plan to reduce US aid to countries he says are doing nothing to stop MS-13 gang members from crossing into the United States illegally.

"We're looking at our whole aid structure. It’s going to be changed very radically," Trump told a roundtable discussion about the threat posed by the violent gang.

MS-13, or the Mara Salvatrucha gang, was founded in Los Angeles in the 1980s in part to protect immigrants from El Salvador and has since grown into a sprawling cross-border criminal organization.

Trump has made the fight against the gang a major part of his drive to stem the flow of immigrants illegally entering the United States. 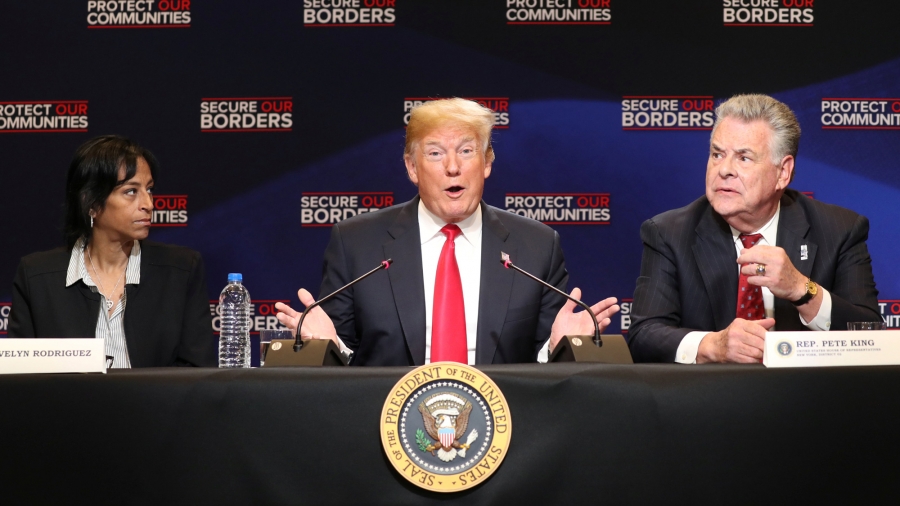 US President Donald Trump speaks during a roundtable on immigration and the gang MS-13 as he sits between Evelyn Rodriguez, whose daughter was killed MS-13 gang members and Republican Representative Peter King at the Morrelly Homeland Security Center in Bethpage, New York, on May 23, 2018.

"I called them 'animals' the other day and I was met with rebuke," Trump said. "They said: 'They are people.' They're not people. These are animals," he said.

Trump was joined at the event by Deputy Attorney General Rod Rosenstein, who has drawn criticism from the president for his handling of a federal investigation into Russian interference in the 2016 presidential campaign.

Rosenstein said MS-13 gang members were preying on unaccompanied children who cross into the United States illegally, most of whom must be released from custody.

Trump praised his homeland security secretary, Kirstjen Nielsen, whom the president has criticized privately for not doing enough in his view to stop illegal immigrants.

"You're doing a really great job," Trump told her, adding that her job was "not easy."

Related: The US government is targeting MS-13, but a former gang member says arrests alone won't solve the problem

Trump did not give details on his plan to cut funding for countries from which MS-13 gang members originate but said the penalties would be large. He also did not identify any countries by name.

"We’re going to work out something where every time someone comes in from a certain country, we are going to deduct a rather large sum of money," he said.

Illegal border crossings fell to record lows with about 15,700 immigrants arrested along the US-Mexico border in April of last year.

Related: The 'alien threat' street gang MS-13 was actually made in the USA

But those numbers soon began creeping back up and in recent months have surpassed levels seen during the administration of President Barack Obama. Trump has voiced increasing frustration with the trend as border apprehensions reached more than 50,900 in April 2018.

But longer-term, crossings have fallen sharply. So far in 2018, 212,000 immigrants have been arrested on the southwest border, a fraction of the more than 1 million caught during the same period in 2000.