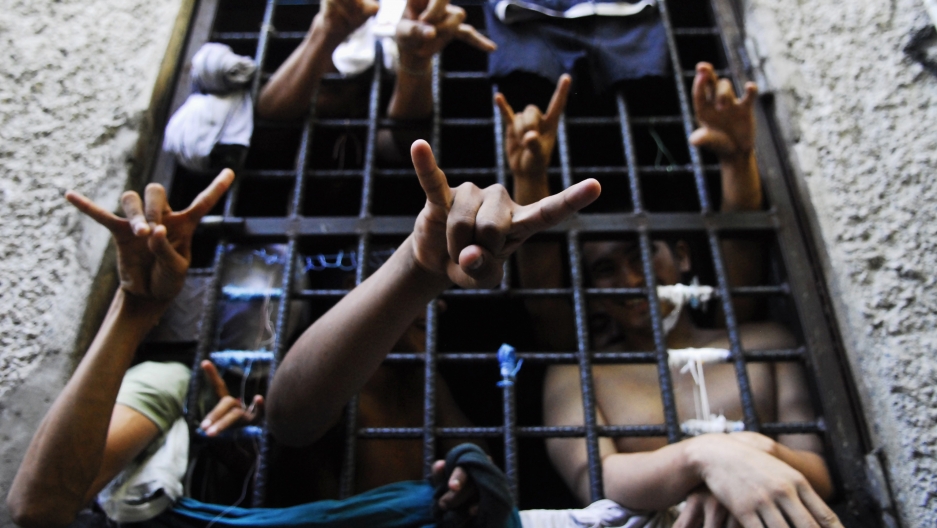 Prisoners flash the MS-13 Mara Salvatrucha street gang hand sign from inside a jail cell at a police station in San Salvador.

Alex Sanchez was listening carefully when President Donald Trump spoke about the gang MS-13 during the State of Union Address Wednesday night.

For Sanchez, it hits home.

He's a former MS-13 member who founded the US chapter of Homies Unidos, a group that helps get young people out of gangs and into productive roles in their communities.

He agrees that gangs threaten, as Trump puts it, the "most vulnerable communities," but the Los Angeles-based organizer takes issue with the president's characterization of MS-13 as an "alien threat."

"These gangs were created in the United States and continue to exist because there hasn't been a straight, smart strategy to address the problem that's not really affecting white society, it's affecting communities of color," he says. "As long as we continue to look at this as a criminal element, instead of a social issue and a health issue in our communities, we will continue to have gangs."

Related: The US government is targeting MS-13, but a former gang member says arrests alone won't solve the problem

On Wednesday Trump called on Congress "to finally close the deadly loopholes that have allowed MS-13 and other criminal gangs to break into our country." He added, "We have proposed new legislation that will fix our immigration laws and support our ICE and border patrol agents. These are great people, these are great, great people that work so hard in the midst of such danger."

That sort of message, Sanchez says, fails to grapple with the social and economic disruption that sends youth to seek protection in gang membership in the first place. Sanchez offers his own cautionary tale as a young boy fleeing the war in El Salvador and arriving in California.

Related: On Nantucket, a teenage migrant gets swept up in a crackdown on Salvadoran gang

"I was not welcomed, I was made fun of. I was a 7-year-old boy and I was targeted by different ethnic groups and other people because of my accent and the lack of understanding the language," he says. "When I walked down the street I saw violence, I saw alcoholism, I saw homelessness. You know, I was afraid all the time. I didn't feel safe. And the gang provided that to me."

Sanchez says gangs will only be disrupted when government funds the social supports that are currently lacking. He says the White House reliance on mass deportation of those suspected of gang membership will backfire.

During President Trump's first 100 days in office, 41,000 known or suspected undocumented immigrants were deported. The White House issued an executive order making criminals and non-criminals an equal priority for deportation.

Often those deported are sent back to a country they don't recognize. Many deportees are desperate. Twenty-one-year-old Frederick Hernandez, a former Homies Unidos volunteer, is a case in point. In January of last year he lost his immigration case and was sent back to Mexico. Sanchez says Hernandez fell into depression and just this week committed suicide.

"Now we're trying to get him back [to the US] so he could be buried next to his family," Sanchez says. "This is the tragedy of deportation that people don't see when they look at us as criminals. People don't see that we're human and that we could change. And we have parents, we have family, we have children. We're human."

Sanchez is currently on a tour of sixteen California prisons. He'll meet with dozens of Central Americans and Mexicans preparing for deportation, hoping to ease their transition back home.