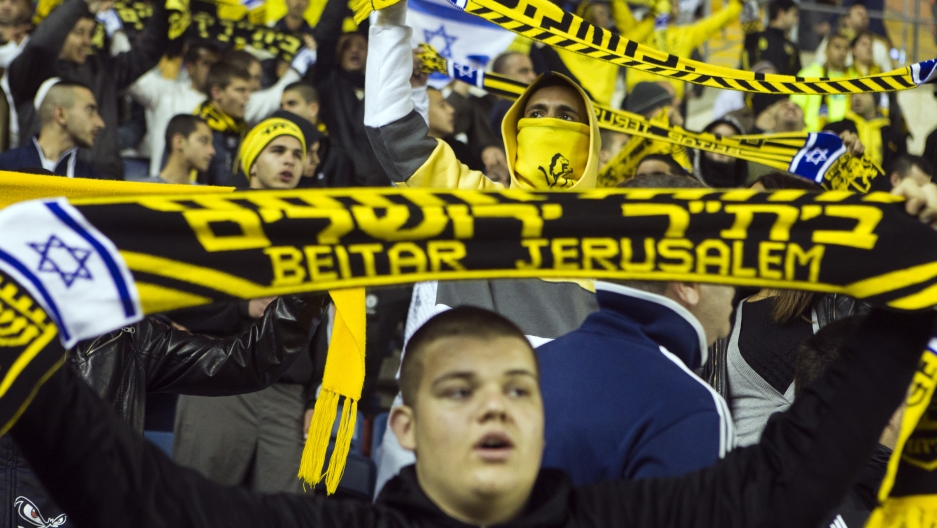 Fans of Beitar Jerusalem shout slogans during a match against Bnei Sakhnin as part of the Israeli Premier League, at Teddy Stadium in Jerusalem Feb. 10, 2013.

In a nod of appreciation to President Donald Trump’s decision to move the US Embassy to Jerusalem, the Israeli soccer club Beitar Jerusalem announced that it would like to change its name to Beitar “Trump” Jerusalem.

The willingness of a major sports team to openly embrace a polarizing politician might come as a surprise to American sports fans. In the US, teams are generally loathe to publicly embrace particular politicians or candidates, lest they needlessly alienate segments of their fan base.

I study the cultural dynamics that shape Israeli political identities, and sports in Israel are a powerful political sphere. Unlike American sports teams, Zionist sports federations were originally organized along political fault lines in the first half of the 20th century, with political rivals competing on the playing field.

Beitar Jerusalem is closely aligned with Prime Minister Benjamin Netanyahu’s Likud party, and its fans have long viewed themselves as political and economic outsiders. When it’s viewed through this lens, the team’s eagerness to associate itself with Trump and his brand of politics make sense.

The team of Israel’s forgotten Jews

In 1923, the Beitar movement was founded in Latvia. A Revisionist Zionist youth movement, it differed from mainstream Zionism in a few key ways: It promoted a more aggressive expansionism, seeking to establish a Jewish state on both sides of the Jordan River; it assumed a belligerent posture toward the British government in Palestine; and, eventually, it adopted anti-socialist views.

In 1936, David Horn, who chaired the local Beitar branch in Jerusalem, recruited some Revisionist activists to establish the Beitar Jerusalem soccer club. Many of them belonged to the Irgun, an underground militia that launched attacks against Arab and, later, British targets. In the 1940s, because of some players’ affiliation with underground militias, British authorities expelled them.

After the state of Israel was established in 1948, Beitar’s image as a bastion of opposition only hardened.

In Israel’s early years, the socialist Mapai party was the country’s most powerful political party. Hapoel, the country’s largest soccer federation, belonged to the General Federation of Labor in Israel and, therefore, was closely aligned with Mapai.

Beitar Jerusalem, on the other hand, tended to attract outsiders and the oppressed as fans.

During the 1950s and 1960s, Jerusalem absorbed many of the Jews who emigrated en masse from Arab and Muslim countries — people who, in Israel today, are called “Mizrahim.” These immigrants, especially those from Northern Africa, often found themselves looked down upon, discriminated against, and relegated to the bottom of the socioeconomic ladder and the margins of the political system. Those who didn’t belong to the ruling Mapai party suffered from additional discrimination in employment and housing.

In those years, Beitar attracted the sympathy of many Mizrahim, and the team’s circle of fans evolved into a kind of political and cultural opposition.

Politically, the team continued to be identified with the right-wing Herut party that was populist, anti-socialist and committed to territorial expansionism. Its bleachers, meanwhile, boomed with songs and slogans borrowed and adapted from old Sephardi Jewish religious tunes. Until the early 1980s, the government-monopolized media — run by Jews of European origin — often excluded these songs from the airwaves.

Success on the pitch — and at the ballot box

Over time, Beitar transformed from a team with a local following to one with a large national fan base. Its close ties to Likud leaders probably helped build its following and winning the state cup tournaments in 1976 and 1979 — just around the time Likud seized power in 1977 — caused the team’s popularity to explode. 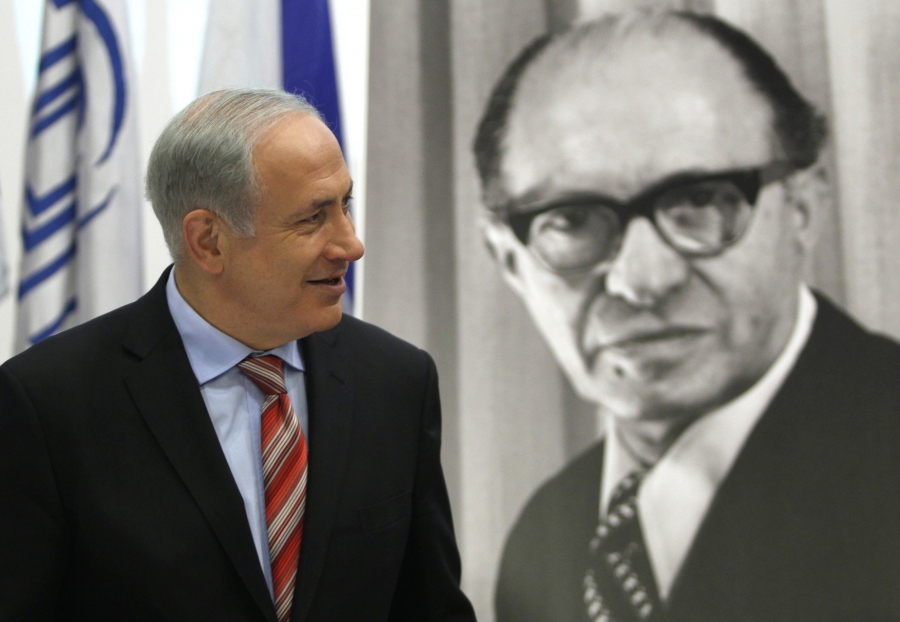 Throughout the 1980s, the overlapping affiliations of Likud, the Mizrahi people and the Beitar soccer team crystallized. Beitar Jerusalem’s successes during the 1980s and 1990s — three championships and three state cups — made the team popular among a wider circle of fans, which included even some Arab citizens.

However, the team remained especially popular among the people who were once called “the second Israel” — the lower-class Mizrahim.

While Beitar’s right-wing leanings are nothing new, since the 1990s a new vocal segment of its fan base have expressed anti-Arab attitudes. Beitar remains the only professional soccer team in Israel to have never signed an Arab player. The fan organization La Familia, established in 2005, has close ties with the country’s far-right politicians and it openly identifies with the outlawed Kach movement, which seeks to install a theocracy and expel all Arabs from Israel and the territories it occupied in 1967.

The front office has made some attempts to bring Arab players on board, only to be rebuffed by their fans. Today, some hardcore fans consider anti-Arabism inherent to the identity of the club. Their repertoire of slogans and chants includes some rather profane anti-Arab and anti-Muslim messages.

What’s behind the racism?

Scholars of Israeli society have tried to explain why many Mizrahi Beitar fans espouse nationalistic, hawkish and, at times, Arab-hating views. Some point out that the Mizrahim are in competition with Arabs over the same low-paying jobs. Others argue that, in a political atmosphere that stigmatizes Arab identities and discriminates against Arabs, Mizrahim feel the need to reject Arab elements of their identity.

At the same time, there are other soccer clubs, like Israel’s champion Hapoel Be'er Sheva and Bnei Yahuda, that have a big Mizrahi fan base. These teams signed Arab players, and their Mizrahi fans didn’t organize to prevent their inclusion. 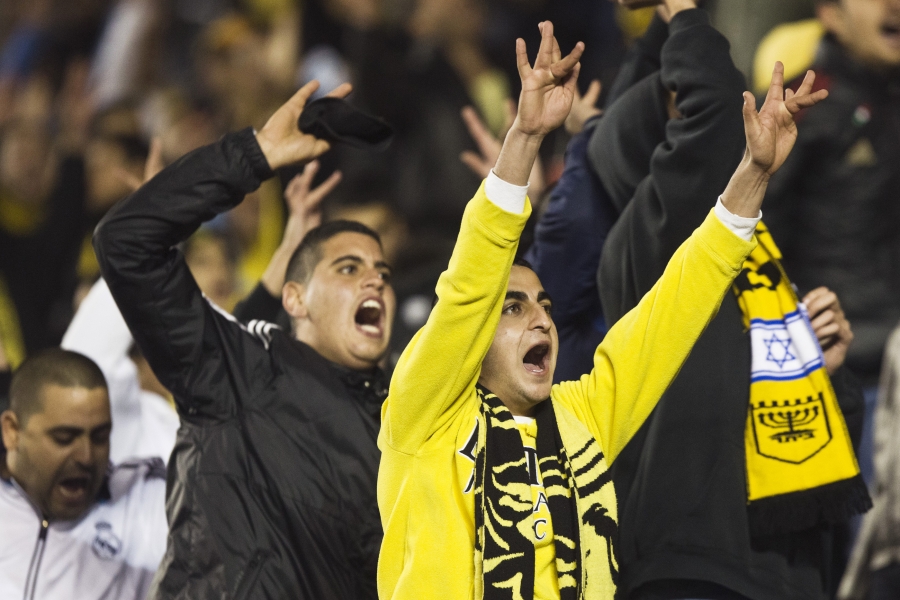 Fans of Beitar Jerusalem cheer during a match against Bnei Sakhnin as part of the Israeli Premier League, at Teddy Stadium in Jerusalem Feb. 10, 2013.

So what’s going on with Beitar Jerusalem? Since 1967, when Israel occupied East Jerusalem and annexed it against the will of its Arab residents, the city has been a hotbed of political extremism and violence. This political atmosphere interacts with Mizrahi fans’ feelings of marginalization; together, they can lead to hostile attitudes toward Arabs.

There are obvious parallels between Beitar Jerusalem’s fan base and the supporters of Donald Trump who feel politically and culturally marginalized — or, as Trump describes them, the country’s “forgotten men and women.” In this context, the team name change makes sense.

It’s unlikely, however, that it will be officially implemented.

First, it contradicts the bylaws of the Israel Football Association, which states that teams can only be named after dead people.

Trump, as an ally of Netanyahu, is very popular among these fans. But the team name has remained the same for all 82 years of the club’s existence.