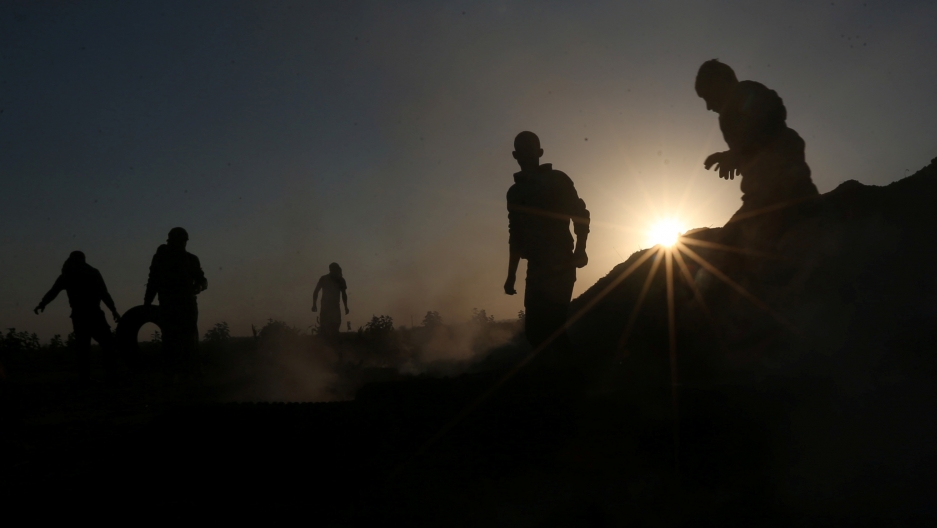 Palestinian demonstrators put out a fire caused by objects dropped from Israeli drones during a protest against the US embassy move to Jerusalem and ahead of the 70th anniversary of Nakba, in Khan Younis in the southern Gaza Strip on May 14, 2018.

The visuals were stark: On Monday, as US officials opened the new US embassy in Jerusalem, thousands of Palestinians were injured at the Israel-Gaza border fence as dark smoke filled the sky.

But as the skirmishes tapered off, Monday's events still had a forceful impact internationally: Countries criticized Israel's use of deadly force against unarmed protesters and the United States' decision to open its new embassy in a city whose status has been one of the most contentious in the Israeli-Palestinian conflict. (Palestinians also recognize Jerusalem as their capital.) President Donald Trump did not attend the opening ceremony, but his daughter Ivanka and son-in-law Jared Kushner did.

Related: Why moving the US embassy to Jerusalem is so controversial

Abusada says the border fence has become a focal point for the clashes.

Mkhaimar Abusada: Some of the Palestinians who are trying to bridge the fence, they wanted to tell the Israelis that the slow death that they are facing in the Gaza Strip is not acceptable anymore. They demand a better future for themselves and for their families, and that's why they are sending a message of anger toward Israel. Now, whether they succeed in infiltrating the fence or not, they just wanted to tell Israel and to tell the international community that the slow death of 2 million Palestinians in Gaza is not acceptable. And there has to be a way out of this.

The World: Today is the 70th anniversary of the Nakba, or Arabic word for catastrophe, that was in 1948 when hundreds of thousands of Palestinians fled or were expelled from their homes. What does this day mean to you?

You say Palestinian leaders are also guilty of the suffering of the people in Gaza. Who are you specifically pointing a finger at? I mean, Hamas is in charge in Gaza. Are they also responsible?

It does sound like there are multiple reasons for these protests in the Gaza Strip. I want to know about this tactic of charging the border fence in waves of people. I mean, why are these protests taking this particular form right now? What's that about?

I'm just curious, do you have any Israeli friends?

And on the Israeli side, do you feel like you have to understand what's going on in Gaza and the pressure that people who live in Gaza are under?

Definitely. There are many Israelis who are sympathetic to the situation in the Gaza Strip, and they do criticize their own government. But unfortunately, what exists in Israel is a government that represents the most extreme Israelis, who do not pay attention to the economic and social needs of the Palestinian people who are under Israeli occupation.

What do you think about these protests? Are they likely to grow, or fade, or take a new form?

Yesterday was the deadliest of all the past five months. And the organizers of this protest are calling for the continuation of this protest until June 5. So we do expect that this nonviolent protest will continue for about 20 more days. But I believe it's going to be less intense.

What do you think is the way forward?

Yossi Klein Halevi: I think that that we need to take a few steps back, a few deep breaths and, at least for now, suspend the urge to come up with yet another blueprint for yet another failed peace process. And we need to rethink: Why have we gotten to this point? Why do we keep failing at attempts to solve this problem?

This attempt that the diplomats have made over the years to circumvent the Palestinian story, the Israeli story and to just focus on the future as if the past isn't going to continue to sabotage us ... It doesn't work. That’s the Western approach to peacemaking, and in the Middle East, you never forget where you come from. You never forget your story. And so this is a moment that's erupting this rage among Palestinians and in large part is being motivated by this story that began 70 years ago, with what the Palestinians call the Nakba or the catastrophe. And on the Israeli side, there is this accumulated rage as well which is the denial of Israel's legitimacy for the last 70 years within the Arab world, and especially in the Palestinian national movement.

In Israel, we need to have a serious conversation among ourselves about how we relate to Gaza. It can't only be a relationship of trying to stop thousands of Hamas demonstrators, rioters, call them what you like, from crossing our border that. For Israel, that's a given. And we in Israel have now gone into siege mode, and we have very good reason to be under siege if you look around at our borders. We have enemies who deny our legitimacy, our right to exist, on almost every border. We have attempts to violate those borders from the Iranian Revolutionary Guard to the north, Hezbollah in southern Lebanon.

But when you are in siege mode you don't always think clearly.

But to single out the demonstrators for just charging the fence takes out the context of the US embassy opening up in Jerusalem — which is what they were protesting. What did the opening of the of the new US embassy in Jerusalem do to both sides' ability to turn things around at this point?

Right. So I would say that the embassy was a trigger. But don't forget that we are we are into the sixth week of these of these demonstrations, these massive attempts to cross Israel's border. The embassy intensified the emotions yesterday, but I think a far more potent trigger was the 70th anniversary of what the Palestinians called the Nakba — their national catastrophe. That was on the table regardless of the optics.

Let's say you take away the religion in the history of the Mideast. I mean, this is basically a real estate issue. I mean, who in the world would come to the negotiation table to talk [about] a property with their neighbors saying, "Well, we'll figure out where the property lines go, but just know that this chunk of the backyard ... is ours." I mean, who would negotiate when those are the terms?

But the problem that makes these negotiations so dysfunctional is that, yes, on the one hand, you have settlement expansion on Israel's side. And on the side of the Palestinian leadership, you have a systematic denial of Israel's legitimacy. So the same question that Palestinians can justifiably ask to Israelis, Israelis can justifiably ask to the Palestinian leadership. The two sides have been repeatedly coming to the table without releasing the legitimacy of the other. And so we are going to continue failing until we start a conversation. This is the conversation that is long-term, about our stories, about our legitimacy, about our rootedness. And that needs to take place along with the negotiations over solving the tangibles.

Some Reuters reporting was used in this piece.