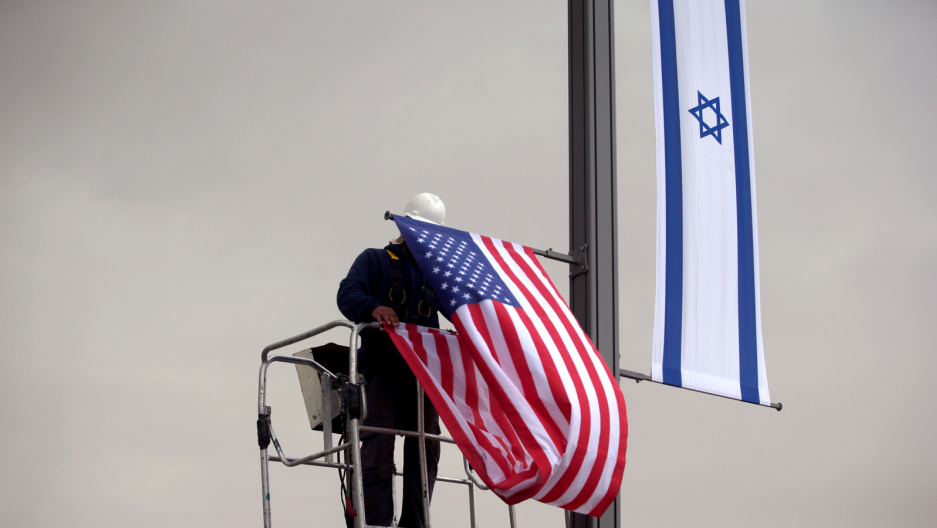 A worker on a crane hangs a US flag next to an Israeli flag, next to the entrance to the US consulate in Jerusalem, May 7, 2018.

Overwhelmed with emotion and jet lag, Marion Gillian, 43, a Christian pilgrim to the Holy Land, sits near the Western Wall, fanning herself with her straw hat. She has come to Jerusalem with a group from her church in a small town outside of Columbus, Ohio, to be in Jerusalem for the opening of the US embassy, scheduled for May 14.

Reverently touching the stones of the wall, which is worshiped by Jews as the last remnant of the Holy Temple, she says, “The state of Israel is proof of God’s promise to the Jewish people. Jerusalem is the ancient capital of Israel, back to the days of King David and up to this very moment. Even President Trump may come when the embassy is opened.”

President Donald Trump is not expected to attend the opening of the US embassy in Jerusalem, which follows the president’s decision, announced in December 2017, to recognize Jerusalem as the official capital of the state of Israel. What is clear, however, is that, at least in part, that decision is a political gesture to American evangelicals like Gillian.

Trump has good reasons to cultivate their support: Some 80 percent of evangelicals, representing approximately 36 percent of the electorate, supported Trump in the 2016 elections.

The decision to recognize Jerusalem as Israel’s capital, rather than as an issue to be decided in negotiations, drew condemnation from heads of Christian churches throughout the world, including Pope Francis. It widened the rift between American Christian evangelicals who support Israel’s hardline policies and the Christians in Israel and the West Bank, who identify politically as Palestinians. And, since even the most moderate Palestinians insist that the capital of a future Palestinian state will be in Jerusalem, it enraged the Palestinian community and raised the possibility of a new outbreak of violence in the Holy City.

Furthermore, the dedication of the embassy is scheduled the day before Nakba Day, on which Palestinians mark the catastrophe (“Naqba”) of their displacement in 1948 in what Israelis regard as their War of Independence.

Micky Rosenfeld, Israel’s police spokesman, says that “security forces are taking into consideration the period we’re going to be in. … We’re talking about an intensive week.”

The inspiration for Christian support for Israel is linked to Genesis 12:3, in which God promises Abram: “I will bless those who bless you, and whoever curses you I will curse; and all peoples on Earth will be blessed through you.” Theologically, support for Jews in the Holy Land dates back as far as the 16th century. Politically, it dates back to the late 19th and early 20th century, when British evangelical leader William Hechler worked with Theodore Herzl, the founder of political Zionism, to promote the idea of a Jewish homeland.

A 2015 research poll by the Nashville, Tennessee-based LifeWay Research reported that 69 percent of evangelicals say the nation of Israel was established as a result of biblical prophecy and 73 percent believe “events in Israel are part of the prophecies in the Book of the Revelation.” Although most mainstream Catholic and Protestant churches have rejected evangelical beliefs regarding the state of Israel as the harbinger of the End of Days, pro-Israel evangelical support for Israel appeared prominently in Jerry Falwell’s Moral Majority in 1979 and continued to grow as the religious right gained power within the Republican Party. As Célia Belin notes in a report for the Brookings Institute, “pro-Israel posturing serves today as a statement of cultural and political belonging to the Republican camp, as much as being against abortion has.”

Only a few thousand evangelical believers actually live in Israel and the Occupied Territories, and most of them are American expats. Yet their political and philanthropic presence is tremendous. David Parsons, then a lobbyist in Washington, DC, and now the vice president of the International Christian Embassy of Jerusalem, was one of the drafters of the Jerusalem Embassy Act of 1995, which is the legal basis for Trump’s decision to move the embassy this month.

The International Fellowship of Christians and Jews (IFCJ), founded in the 1980s, has raised, according to its own sources, some $1.5 billion dollars for social programs in Israel. Much of the support is earmarked for helping Jews from around the world immigrate to Israel, as part of the belief that the return of the Jews to Israel is a prerequisite for the second coming of Christ. And in a clear signal to the president, the IFCJ held its first gala fundraising dinner marking the 70th anniversary of the establishment of Israel, in March 2018, at Trump-owned Mar-a-Lago; the president did not attend but sent a well-received video clip.

In 2015, Dr. Mike Evans, a well-known evangelical pastor who is also a member of Trump’s executive evangelical advisory board, opened the Friends of Zion Museum in downtown West Jerusalem. Equipped with the most sophisticated interactive audio-visual equipment available, the museum provides spectacular displays of the Christian Zionist heritage. Each visitor is called upon to personally fulfill the biblical injunction of Hineni, "Here I am" in Hebrew, committing him or herself to defend God’s chosen people. Over 250,000 people have visited the museum to date.

The museum was one of Gillian’s first stops in Jerusalem. “When Mike [Evans] called on each of us to commit ourselves to Heneni, I felt it in my soul,” she says. “President Trump and Prime Minister Netanyahu will make sure that this commandment is fulfilled.”

Israeli leaders from across the political spectrum have long welcomed evangelical support. But Netanyahu, who strongly supports Trump, has taken this support to a whole new level. Netanyahu presents himself as the protector of Christian holy sites and a leader in the fight against Islamic extremism, and these stands that appeal to the evangelical base. In turn, Christian Zionists have given strong support for Netanyahu’s religious-nationalist and aggressive agendas, which has translated into some of the Trump administration’s positions.

Some evangelical organizations, mostly based in the United States, send volunteers to work in Israel, mostly in the territories. One such organization, Hayovel, declares on its website that it has brought over 1700 volunteers into Judea and Samaria [the Jewish nationalist terms for the West Bank]. Chaim Silberstein, a leader in the local council of Beit El, a settlement in the West Bank that also enjoys financial support from US Ambassador to Israel David Friedman and Trump’s son-in-law, Jared Kushner, says he welcomes the volunteers, despite their theology.

“Sure, I know that some of our supporters believe that Jesus was the Messiah and will return to Earth, and that the Jews do not fare well in that scenario,” Silberstein tells PRI. “But until that time — there’s lots of issues we can work on together, to our mutual benefit.”

The tiny native-born Christian community has been excluded from and alienated by this process. According to a 2016 study by the Pew Center, Christians make up about 2 percent of Israel’s adult population (compared to 14 percent who are Muslims). The vast majority are ethnically Arab, and thus share an Arab-Palestinian identity with the Muslim population. They are also politically aligned with the prevalent Palestinian position, and the official position of the Palestinian Authority, demanding the establishment of an independent Palestinian state, with its capital in Jerusalem.

Indeed, in December 2009, the churches of the Holy Land issued the Kairos Palestine Statement, which uses Christian theology to promote Palestinian independence and calls the “occupation of Palestinian land a sin against God and humanity.” With regard to Jerusalem, Kairos Palestine states “Jerusalem is the foundation of our vision and our entire life” and calls a political resolution to the struggle for the city, which must be “the first issue that should be negotiated.”

Even some of the evangelicals who were born in this region oppose the positions taken by American evangelicals. Rev. Professor Yohanna Katanacho, of the Nazareth Evangelical College and Bethlehem Bible College, tells PRI, “Loving the Jewish people does not mean hating Palestinians … [it] entails provoking [the Jews] to love their Palestinian neighbors and treat them as themselves. This is the way of Christ.”

Katanacho also objects to the theology that the Jews will either convert or die at the End of Days: “We are not excited about proposals for an eschatological doom in which two-thirds of our beloved neighbors are killed. At the same time, we want to love them in a way that does not endorse stealing land, violating UN resolutions or oppressing our Palestinian people.”

In the long term, Trump’s support for Israel as a means to engage evangelical support may be misguided. A study released in 2018 by the LifeWay Research found that 40 percent of younger evangelicals (age 18–34) had “no strong feelings about Israel.”

Rabbi David Rosen, AJC’s International Director of Interreligious Affairs based in Jerusalem, warns that the decision to move the embassy and ignore the indigenous Palestinian-Christian community is short-sighted and potentially dangerous for Israel. “The local Christian community is minuscule and not politically significant. But decisions like these are radicalizing the community; indeed, the Kairos Palestine document can be seen as a way to distance themselves from the evangelicals. Until now, Palestinian Christians have not been significantly involved in violence. But these decisions may push them to violence.”

Adds Katanacho: “Moving the embassy empowers the war-makers among Palestinians and attenuates the legitimacy of Palestinian peacemakers.”

The Israeli police have already begun patrolling the area of the future embassy and increased security presence is palpable throughout the city. But Gillian is not concerned. “Even if there is violence, this is God’s will,” she says.