Participants formed a sea of anti-sexism placards while a program featuring a dozen speakers lasted a little over an hour.

On Saturday afternoon, some 300 protesters descended outside inner-city Shinjuku Station in Tokyo to rally against sexual harassment and a deeply entrenched culture in the country of victim blaming and forced silence.

The bustling Shinjuku Station serves 3.6 million passengers every day. Every weekend, the surrounding streets burst at the seams with pedestrians. Similarly, the demonstration here, with a stage wedged in between a cluster of high-rise retail buildings, was almost at capacity by start time.

Participants formed a sea of anti-sexism placards while as many as a thousand curious bystanders and other supporters gathered on the sidelines for an hourlong program featuring a dozen speakers.

The #MeToo movement captured the nation's attention earlier this month after a top-ranking Finance Ministry official was accused by a female reporter of repeated sexual harassment. The official, Junichi Fukuda, 58, denies sexual misconduct despite a secret recording published online that revealed the bureaucrat asking the reporter, “Can I kiss you?” and “Can I hug you?” and “Can I touch your breasts?” during an interview.

People gathered in Japan over the weekend to speak up as part of the #MeToo movement.

Related: Women in the global aid sector are saying #AidToo

Rally organizer Yume Morimoto says the protest began as a means of pressuring Fukuda to step down. But after the official recently resigned of his own accord, organizers shifted their attention to the bigger picture: sexism itself. “We need to speak out right now while the topic is still hot,” she said. “It needs to be something that's the first of many to come.”

Also, earlier this month, a Japanese actress who goes by the name Chino won a settlement against a director she claimed sexually harassed her, according to The Associated Press. Chino said in the AP report that she intends to use that money to start a #MeToo group for the country's entertainment industry.

Saturday's #MeToo event was a grassroots gathering that came about organically. Yume attributes the large turnout to Twitter. “There were so many people who had this anger boiling up and no platform to say anything about it,” she explained. “So, the moment one person picked it up, it spread like wildfire.”

After individual followers unanimously tweeted a meeting spot in front of Shinjuku Station, an official event page was promoted on Twitter only three days before the rally. Yume says in a matter of days, nearly 900 followers joined the event's official Twitter and Instagram accounts.

Protesters gathered for a #MeToo rally in Tokyo on Saturday. The #MeToo movement captured the nation's attention earlier this month after a top-ranking Finance Ministry official was accused by a female reporter of repeated sexual harassment.

The #MeToo rally's organizers first met two weeks ago at a restaurant on the edge of Tokyo. They came together thanks in part to an event that had attracted like-minded feminists — both men and women. Soon, a community arose around the cause and people stepped up to tackle crimes against women and the social taboo of speaking out.

The rally's message was "silence won't protect you," and a Japanese-language hashtag translating to mean, "I won't be silenced," was trending on Twitter on Saturday.

When local feminists were tweeting the lead-up to the event, Eri, 24, who asked that her full name not be used, knew she couldn’t miss the chance to voice her concerns. She’s experienced sexual harassment and assault on the street, on the train and at work. Each time, she says, she has felt helpless to report it. “At a service job, a client grabbed my bum, and I didn’t feel comfortable telling my boss because I knew they wouldn’t understand.”

Eri says she became a feminist after living overseas and coming back and experiencing sexism in Tokyo. “I came back to Tokyo and realized how much worse it was here. It’s easier to recognize the sexism,” she said.

During the morning rush hour, women-only train cars are active between 7:30 a.m. and 8:30 a.m. For first-time travelers, it’s a confusing policy for a country notorious for low crime rates and a general sense of public safety. Eri believes there’s a common misconception that Japan is a safe country for everyone. “In Tokyo, people don’t steal your stuff but for women, it's not that safe,” she said.

Kasumi, 27, who also didn't want her full name used, looks to Twitter as a way to stay in touch with English-language media. She took a leap and joined the movement after seeing women in other countries speaking up. “The power of social media has inspired Japanese women to raise our voices and express that we’re not here for this,” she said.

On Saturday afternoon, some 300 protesters descended outside inner-city Shinjuku Station in Tokyo, Japan, to rally against sexual harassment and a deeply entrenched culture in the country of victim blaming and forced silence.

Women in Japan are typically more educated than their male counterparts but they are still faced with traditional expectations of motherhood. Kusumi says women are discouraged from pursuing tertiary education for fear of losing time to find a suitable marriage partner. She says it’s not uncommon to hear parents questioning the point of sending daughters to a four-year college — wanting to see them go to two-year technical schools instead.

Tokyo University is considered the equivalent of an Ivy League college. But Eri says if you’re a girl at Tokyo University, you make guys feel uncomfortable. She says she’s heard women being warned against attending the university on the grounds that they’ll be less likely to get married.

Related: I didn’t know how big a problem sexual harassment was in China — until #MeToo

And here, there's a prevalent rule-following culture. A well-known proverb drilled into people from an early age goes: "The nail that sticks out will be hammered down." 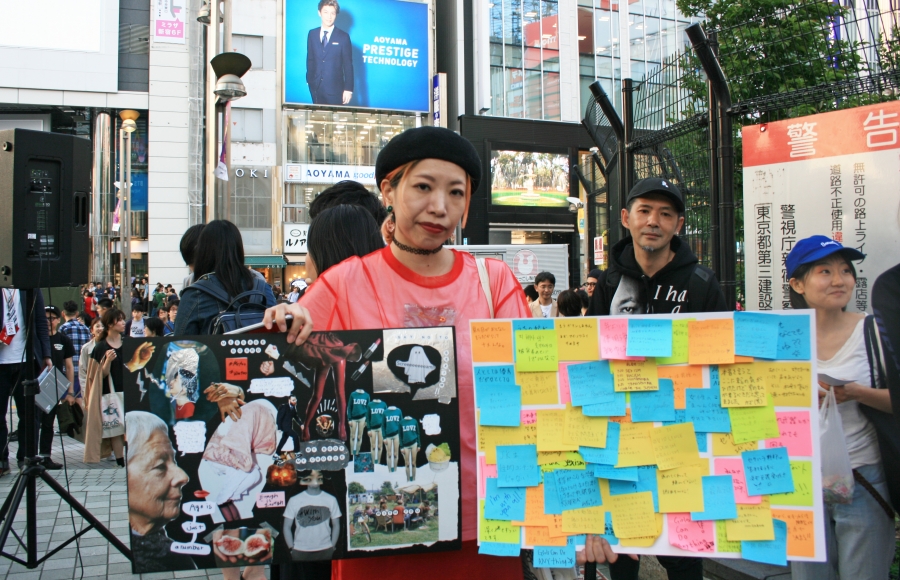 Protesters in Japan showed up for a #MeToo rally over the weekend.

Yume says speaking up is such a big deal that people turn to victim blaming. “Women are scared of backlash and what's going to happen afterward. It's not normal to speak out,” she said.

While Fukuda has been labeled as Japan’s Harvey Weinstein, Yume says such cases happen every day in Japan. It's just a coincidence it happened to someone in power.

Eri says she’s seen firsthand how victims' pleas are often ignored. She recalled a woman abruptly shouting for help on a full train after being groped. The men around her failed to say anything. Yume says women are forced to shy away and prevent a commotion as the Japanese mentality of "putting up with it" (and "it can't be helped") are used to excuse sexual violence.

The message behind Saturday's #MeToo rally in Tokyo was about women not being silenced.

Kasumi referred to an obscure Japanese custom wherein confiding to friends or family as a victim is viewed as bragging about one's appeal or attractiveness.

Meanwhile, Eri says many of her friends aren't interested in feminism and don’t realize it’s a problem. But she acknowledges “it’s not easy, when your parents and friends who have been living in this society, to question it and to realize there’s something wrong.”

When journalist Shiori Ito first went to police to report a rape in 2015, she was warned her career in Japan would be ruined. But for better or for worse, she's become a household name after reporting the crime, holding a press conference and pressing charges.

At this past weekend's rally, protesters applauded and cheered; some even gasped in awe when a message of support from Ito was read aloud by an organizer at the rally. Ito is a beacon of change to many in Japan who have never heard a woman stand up in public and challenge the status quo.