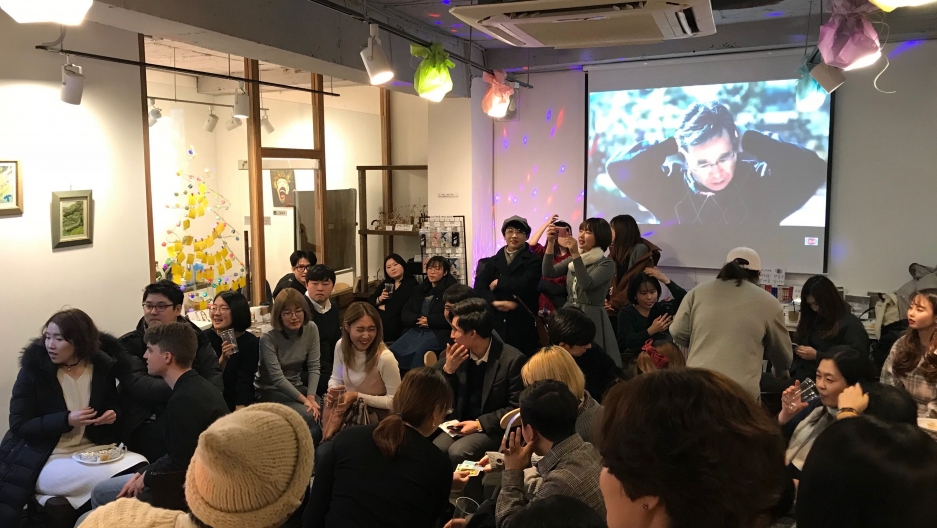 Doing Cafe, a feminist cafe in Seoul, opened a year ago in March. In that time, over 10,000 people have passed through — most of them women in their 20s and 30s. It's the first place like it in South Korea, according to owner Kim Ryeo-il. Recently, the cafe held its first birthday party, which drew over 50 of its supporters.

Ha Yoon-na always believed in feminism, but never wanted to call herself a “feminist.” In South Korea, that word carries a negative connotation, and Ha, a 30-year-old book translator, worried she’d be judged and marginalized.

Ha overcame her fear last year when she visited a feminist space in Seoul. At Doing Cafe, among its more than 1,000 volumes of feminist literature, plus plenty of patrons eager to discuss them, she felt comfortable enough to talk openly about feminism for the first time.

“I had low self-esteem until I came here. I wasn’t sure about myself,” Ha said recently, sitting at a table with a book and a lemon tea. “Doing Cafe empowered me and allowed me to admit I’m a feminist.”

Tucked beside Cheongdam Station on the streets of the capital city’s poshest district, Gangnam (featured in Psy's 2012 pop hit, “Gangnam Style”), Doing Cafe would be unassuming if not for its vivid yellow exterior. Upon closer inspection, it becomes clear that the place is more than a simple cafe — a sign on its door proclaims that it's a “cultural home of feminism.” 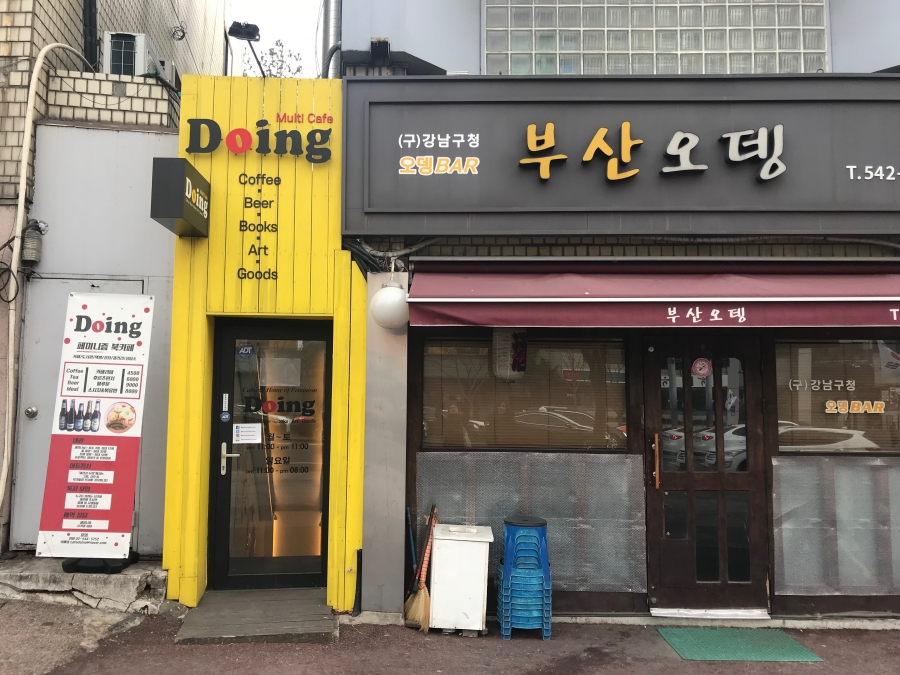 Except for the bright yellow color, Doing Cafe is unassuming from the outside.

In South Korea, where patriarchal and misogynistic attitudes remain deeply embedded in the mainstream culture, Doing Cafe is sort of an unusual, if subversive, establishment. It's the first feminist cafe of its kind in South Korea, according to owner Kim Ryeo-il, adding that it's attracted more than 10,000 visitors, mostly women in their 20s and 30s, from across the nation since opening in March 2017. It’s also inspired a handful of other local feminist spaces.

Related: Will the Year of the Dog mean more babies in South Korea?

Through Doing’s many resources and events — including a feminist library, art exhibitions, guest lectures, store merchandise, social gatherings and one-on-one counseling (conducted by Kim, who has an advanced degree in feminist theology) — it aims to support young women like Ha in their struggle to assert their right to equality.

“This cafe is for the sake of a cultural, societal movement,” said Kim, who also goes by the English name Liz. Most people find out about Doing through social media. 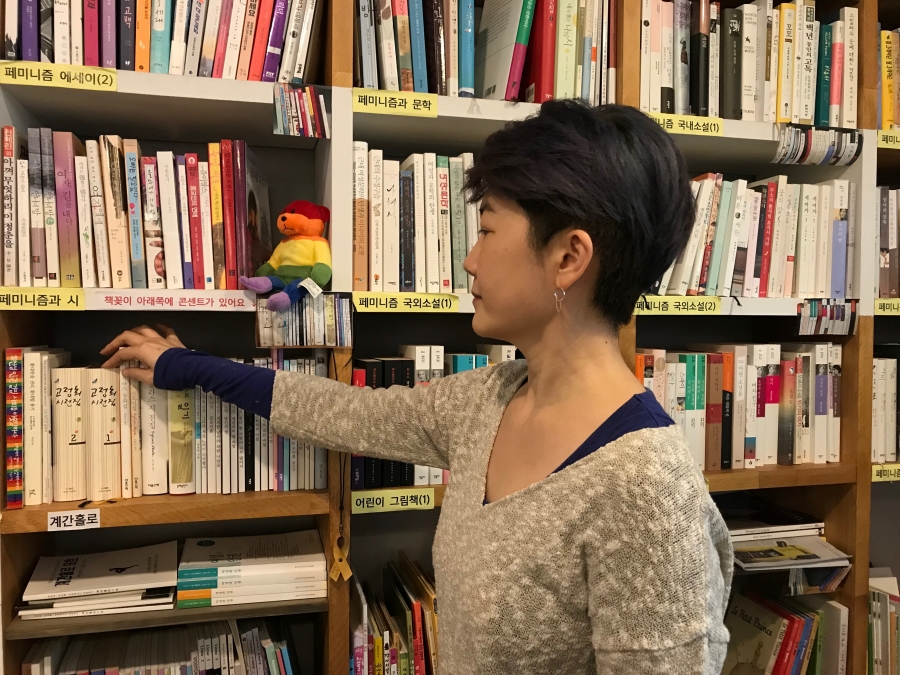 The cafe's owner, Kim Ryeo-il, has long wanted to open a place like this, but never imagined she'd be able to bring it to fruition.

Fifty-year-old Kim hopes today’s movement will bring greater change than the first feminist wave of the 1990s — and less of a backlash. “It hasn’t become a good world,” she said, shaking her head. “Today’s generation of women in their 20s and 30s ... don’t live in a better society than I did.”

Indeed, despite South Korea’s global reputation for cutting-edge technology and trending pop culture, the country lags far behind when it comes to gender equality. It holds one of the worst records in the world, according to the World Economic Forum, ranking 118 out of 144 nations, and among OECD countries, it comes in last for wage parity. 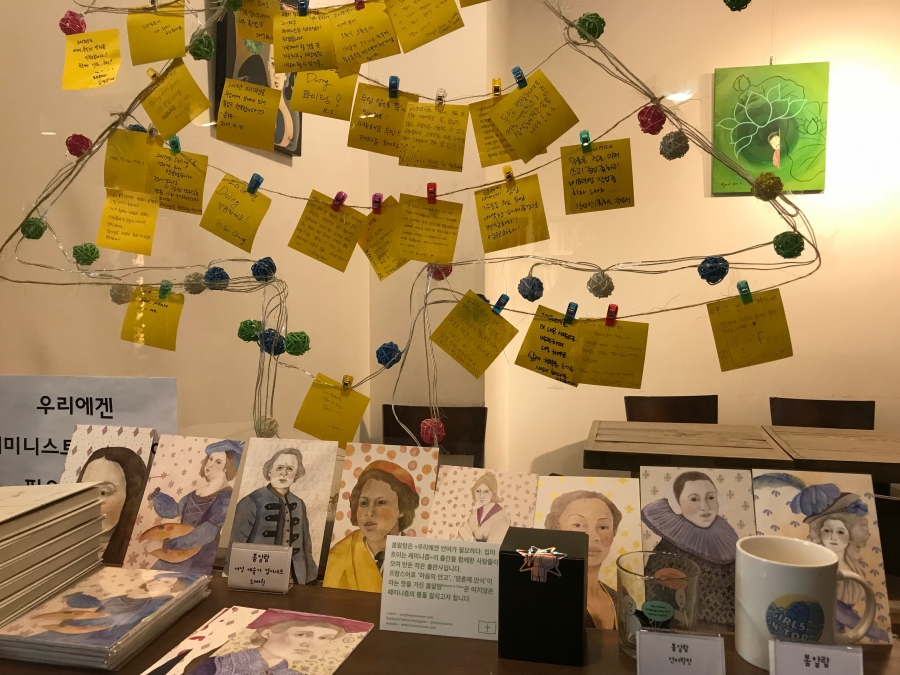 The Post-it notes on this display inside Doing Cafe share patrons’ wishes for the future and messages of thanks.

Social analysts say South Korea’s inequality stems, in part, from its Confucian culture that enforces rigid hierarchical roles and gender norms. For Ha, this inequality is felt within her own family, whereby she says her parents treat her younger brother like a “prince,” while they criticize her feminist beliefs as “an escape from reality” and a “self-delusion.”

“I thought of myself as the odd one out because my family is very conservative and very Confucianist,” Ha said. “I felt lonely.” Like Ha’s parents, her younger brother and sister also eyed feminism as a “dangerous” form of “female chauvinism” and told her they didn’t understand her interest in it.

This reaction is not uncommon in South Korea. “Feminist ideas are still very alien to many people here,” said Helen Noh, professor of social welfare at Soongsil University. “Feminist issues can bring a lot of discomfort.”

That’s because feminism is still taboo, widely misunderstood as the hatred of men or the superiority of women. “When people hear the word feminism, they imagine a very extreme image,” Noh said. “They do not know the real meaning.”

Related: South Korea makes a bold move with a former ‘comfort woman’ at its state dinner with the US and Japan

Even Ha wasn’t completely sure what the term meant, despite unknowingly agreeing with its values. So, she joined Doing in search of a better understanding — mostly for herself, but that understanding ended up extending to the people around her, as well. 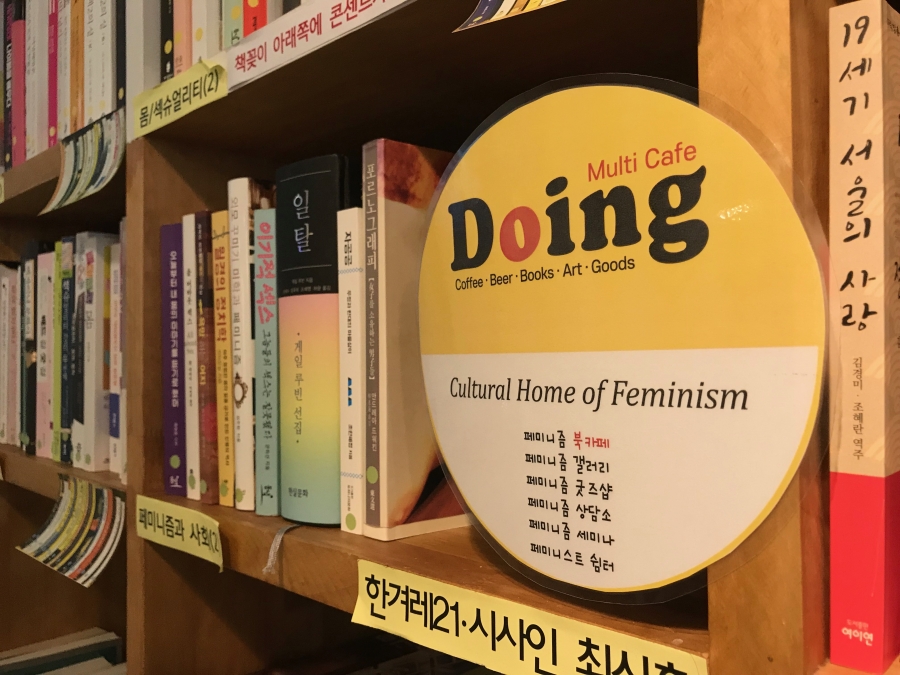 A sign on this cafe bookshelf reads, "Cultural Home of Feminism."

“My notion of feminism was very vague. I wanted to explain feminism, but I couldn’t because I didn’t have concrete thoughts,” she said. “Now, I share my views with my younger brother, and he wants to know about feminism and gender equality.” 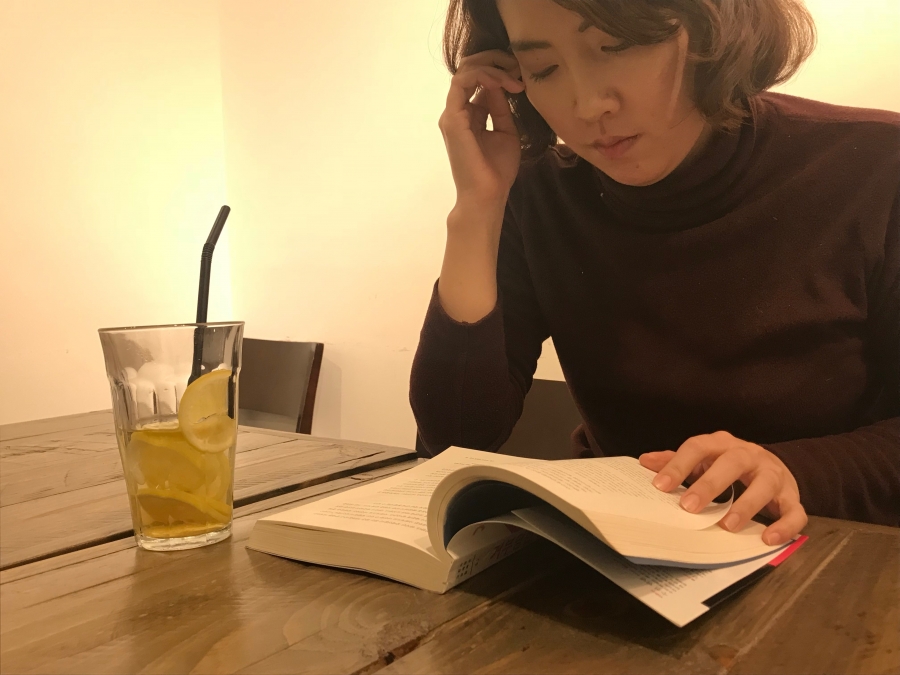 Ha Yoon-na always believed in feminism but was reluctant to call herself a “feminist” until she found a community at Doing Cafe.

Fifteen years ago, when Kim was divorced and raising two kids on her own, she dreamed of building a feminist space, but couldn’t have imagined it would someday be a reality. At that time, she was struggling just to make ends meet.

In May 2016, everything changed. That’s when, one night in a Gangnam restroom, a man stabbed a young woman to death; he had waited for more than 50 minutes as six different men used the toilet and then targeted the first woman who entered. The man later confessed, “I did it because women have always ignored me.” While the murder was not charged as a hate crime, connected instead to mental illness, it shook the country and sparked dialogue about its entrenched misogyny.

For Kim, it pushed her to get to work on opening Doing.

Doing filled a gaping void. “There aren’t many places discussing these sorts of issues in Korea,” said Ha. “It helps people interested in feminism but afraid to call themselves feminists. It brings them together and helps them share their ideas.” Ha believes that by serving as a starting point for awareness building and education, Doing can bring feminist ideas to the broader Korean community.

Still, not every patron understands Doing’s mission. “Passersby don’t know what this cafe is about,” said Kim, who has on occasion encountered people that stop in randomly and end up having anti-feminist conversations, vocalizing their homophobia or bragging about buying cheap sex.

Additionally, the first year has been so tough on Kim financially that she often thinks about closing up shop, but the teary-eyed gratitude she receives from her patrons keeps her going. “In the end, maybe we can really build a better world,” she said. “That is my dream.”

Another patron, 17-year-old Casey Kim, who identifies as nonbinary (a gender identity that is neither entirely male nor entirely female), says they first heard about the space when living in Gangwon-do, the far eastern province where the Pyeongchang Winter Olympics are currently being held. But that didn’t stop Casey Kim from commuting regularly to the cafe, which felt like home. 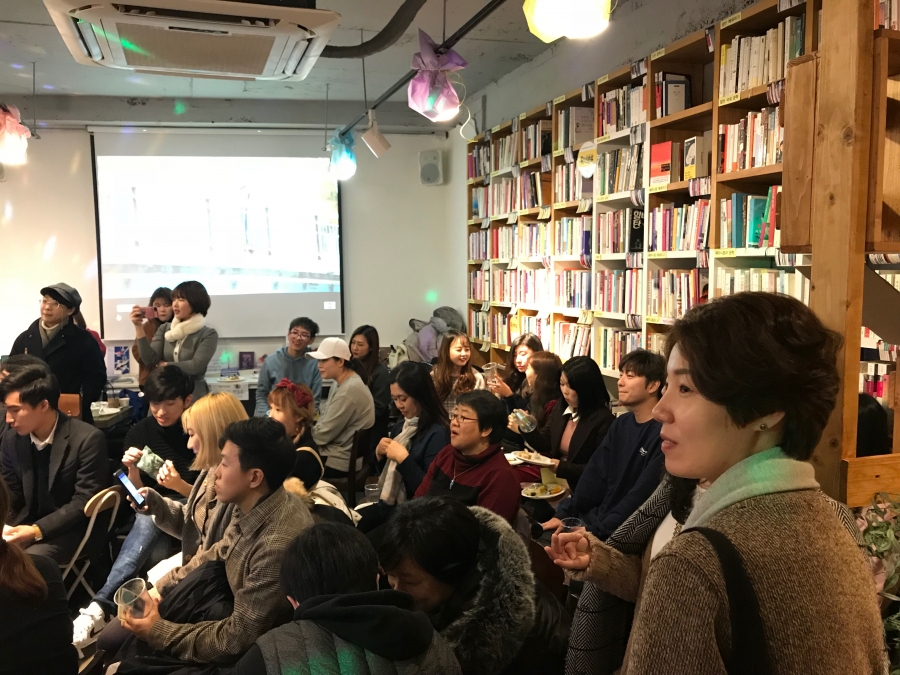 On a brisk February night, Casey Kim, Ha and about 50 other supporters of Doing Cafe gathered in celebration of its first birthday. Doing turns 1 in March. The atmosphere was boisterous, with the lights dimmed and a disco ball throwing bright reflections off the art- and book-lined walls. Attendees mingled, ate kimbap rolls and drank wine against the backdrop of a carefully curated playlist of women’s empowerment music; cafe owner Kim Ryeo-il emceed.

Looking over her patrons, she beamed. The crowd clapped and cheered.

“Doing helped me to find my voice,” said Ha. “Getting rid of misogyny totally will not happen in my lifetime ... but I feel it’s my duty to say, ‘It’s wrong,’ and explain why.”