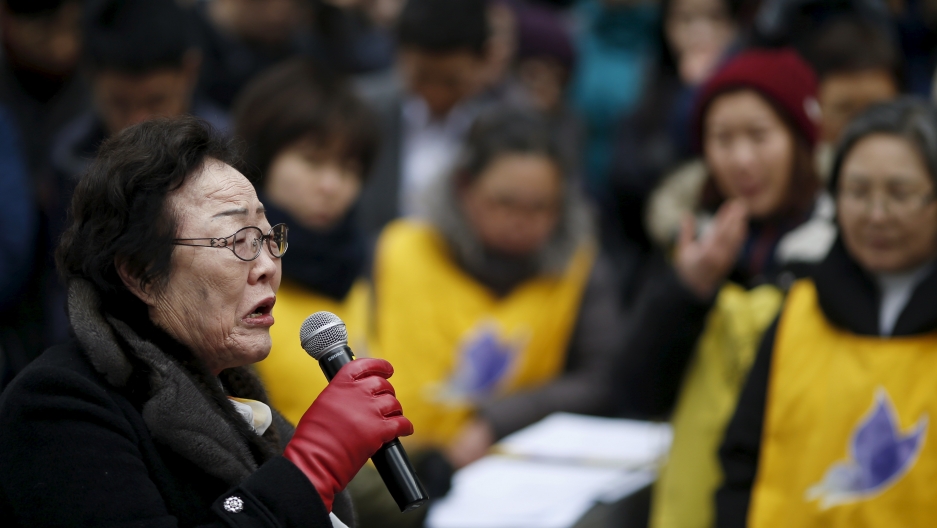 Donald Trump is the first US president in 25 years to go to South Korea on a state visit. In honor of the occasion, South Korea went all out to welcome Trump at Tuesday's state dinner.

During these lavish events, there are certain protocols. Like, don't do anything that is politically insensitive.

An 88-year-old South Korean grandmother, Lee Yong-soo, was invited to the event and sat at the same table as the White House officials accompanying Trump. Lee is a former "comfort woman" — she was kidnapped during World War II and forced to have sex with Japanese soldiers.

It was a provocative move, says Celeste Arrington, a professor of political science at George Washington University. South Korea's intention, she says, was to show Japan and the United States that it should not be taken for granted as the three countries deal with North Korea.

"There's been a lot of talk about how close [Japanese Prime Minister Shinzo Abe] and Trump are," Arrington says. "There’s a strong sense the Korean Peninsula is being swept up by Trump's rhetoric and policy that walks over the interest of South Korea. So, the message was, 'Don't take us for granted ... We have national interests, too.'"

Lee's presence, Arrington says, was also to demonstrate that South Korean President Moon Jae-in, who was elected earlier this year, is standing up to Abe and Trump.

Japan and South Korea reached an agreement in 2015 that included a formal apology from Abe as well as $8.3 million in reparations to surviving comfort women.

Still, the South Korean government doesn't view this as enough. According to a poll taken by a Japanese think tank, Genron, 75 percent of South Koreans do not accept the agreement and want more than an apology.

Lee has been a longtime activist and outspoken critic of the agreement. She appeared before the US Congress, along with two other former comfort women, in support of a House resolution urging the Japanese government to acknowledge and officially apologize for forcing young South Korean women into a life of sexual slavery.

Japanese officials were less than thrilled by Lee's presence at the dinner, which also included guests from Japan. Kyodo News reports that Japanese officials "expressed confusion and frustration over the decision to reference such a sensitive issue at a time when trilateral relations are so crucial to regional security."

And if Lee's presence was not enough to ruffle feathers with Japan, a picture was taken of Trump smiling and hugging her.

"The hug from Trump sends a message that he acknowledges that this is a raw chapter in South Korean history, and when he was in Japan, he met with families of people kidnapped by North Korea," says Arrington.