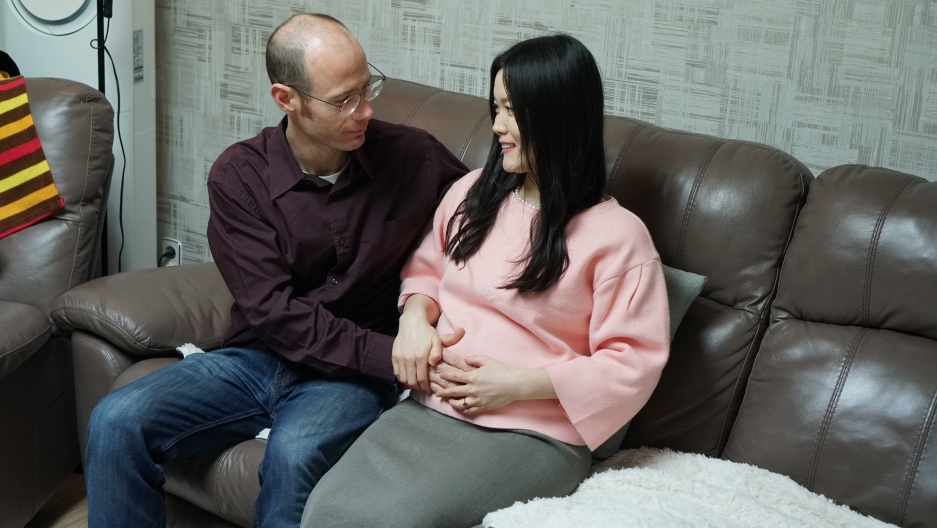 Yoon Ji-young and Matthew Crawford are expecting their first child in the Year of the Dog.

Yoon Ji-young lays down slabs of fatty pork belly that sizzle and crackle as they touch the burning hot grill atop her kitchen table. Four months into her first pregnancy, the 35-year-old says she’s been caught off guard by the “weird” desires she’s had for meaty dishes that she typically avoids.

“I’ve had strong cravings for junk food, like hamburgers and fried chicken,” she says. “I don’t even like fried chicken at all!”

Yoon says she’s looking forward to her mother’s dumplings and other home-cooked meals when she and her husband, Canadian expat Matthew Crawford, 37, visit her family outside of Seoul for the Lunar New Year, which is locally called Seollal and begins today. Based on the Chinese zodiac, their child will be born in the year of the dog — a reputedly auspicious year to give birth.

In South Korea, some people refer to the zodiac animal they were born under much in the same way a person in the US would talk about their astrological sign and the personality traits associated with it. Some believe that a person born during a dog year will exhibit canine-like characteristics; including intelligence and loyalty.

According to tradition, this year is especially lucky because it represents a “golden dog” — a cycle in the zodiac that comes around every 60-years and means extra prosperity.

South Korean media speculate that the country’s birthrate, one of the world’s lowest, could rise thanks to the perceived enhanced fortune as it did in 2007 during the year of the golden pig — a reported 10 percent surge in births.

Yoon and Crawford admit they don’t necessarily buy into all the beliefs connected to the zodiac and didn’t intend to start their family in the dog year, but will never the less welcome the positive notions that come with it.

“I’m sure we’ll hear a lot about the year of the golden dog,” says Crawford, who adds that the success of his three-year marriage has been attributed to their zodiac animals, a monkey and a pig.

“It’s a good combination — pigs and monkeys get along together,” he recalls being told on multiple occasions.

Faced with shrinking demographics, the South Korean government has tried encouraging couples to start families by passing laws that guarantee working parents fully or partially paid maternity and paternity leave. And to make commuting easier for pregnant people, women can obtain pink badges that signal to other passengers on Seoul’s metro system to give up their seats.

Yoon and Crawford joke about how they’re helping the nation boost its population, but note that raising a child in South Korea is, for some, prohibitively expensive.

Yoon, a business analyst at an international company in Seoul, explains that parents are expected to spend lots of money on children's education — and that's a big reason why many couples decide to have only one child, or none at all.

She says she feels pressured already to educate her unborn child because pregnant Korean women are “obsessed” with making their child “smarter and better than the others.”

“Babies have to be competitive," she says with a laugh.

To get an edge on the competition, says Crawford, who works in the education field, the couple plays Mozart in the evening and he reads poetry directly to his wife’s belly.

Before heading out of town for what’s considered one of Korea’s most important family holidays, Yoon says she’s grateful that unlike many parents, her own mother and father never pressured her to marry or produce a grandchild — a grandson in particular.

In fact, the couple isn’t legally allowed to know whether to expect a son or daughter.

A traditional preference for boys coupled with the introduction of ultrasound technology decades ago, led to a rise in sex-selective abortions and caused a lingering imbalance in South Korea’s male to female ratio.

That prompted authorities in the 1980s to ban obstetricians from revealing a baby’s gender in utero. But, Yoon says during a recent ultrasound, she realized her doctor was trying to give her a hint.

“The doctor looked at the screen and said she saw something, so I asked if it was a pretty or handsome something,” Yoon says.

With a grin, her doctor replied, “It's handsome.”