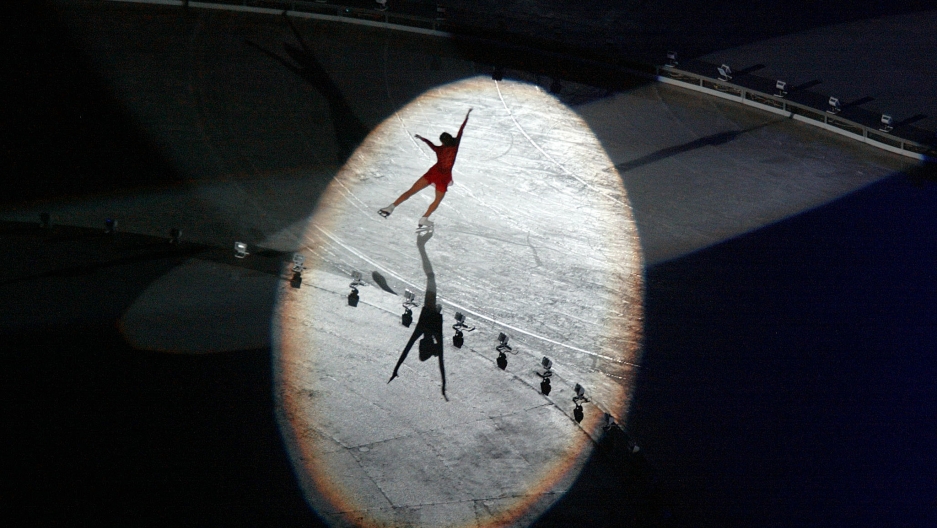 Contrast that to 1992 at the winter games in Albertville, France, when Kristi Yamaguchi became the first Asian American to win the gold in the figure skating event. You could say it was Yamaguchi's win that paved the way for today's increasing number of Asian Americans on ice.

She talked with host Marco Werman about the sport today and how she sees her influence on young women. Yamaguchi is a commentator for NBC's coverage of the Olympic Games in Pyeongchang.

Marco Werman: You've inspired many young women who looked up to you — specifically, young, Asian American women. We'll talk about that with someone who has idolized you, in a moment, but first just give us your kind of expert view on this year's figure skating competition. What are you looking for?

Kristi Yamaguchi: Well, I think this year is interesting and exciting. As for the US team, it's a great opportunity, I think, for medals ... especially in the men's. The US team is led by Nathan Chen who has been undefeated coming into this Olympic year and has really upped the game in men's figure skating ... by landing multiple quads in his routines ... pushing the boundaries from two to three quads up to five ... that is pretty unheard of. So, he is definitely one to watch.

On the women's side, Mirai Nagasu, who made her first Olympic team eight years ago in 2010 and has persevered ... to make this year's team. She's actually going in as one of the only ladies in the competition to attempt a triple axel. It's only been done a couple times before in Olympic competitions so it'll be history in the making. She could be the first American woman to land the triple axel at the Olympics. [Since this interview, Mirai Nagasu landed the historic move.]

I'm just curious. Does watching the sport trigger the same emotions for you when you were competing? Do you get sympathetically nervous?

I do, I do. Particularly this year, I feel really close to a lot of the skaters on Team USA, so I do get very nervous. You know what they've been through and how much this means to them. [With] other athletes, even when I watch some of the other sports, it's the same thing. But it's exhilarating and so inspiring.

Editor's note: Kristi Yamaguchi is joined by Nicole Chung, who wrote how much Yamaguchi meant to her growing up without any Asian American role models. Chung wrote, "What I learned from Kristi Yamaguchi," for The New York Times magazine, and "Kristi Yamaguchi, Unlaced," appeared in Shondaland.

Marco Werman: Well, speaking of inspiring, Kristi ... I want us to turn to someone who became a big admirer of yours around the time of your gold medal in Albertville in '92. Back then, Nicole Chung was a young girl living in Oregon. Now, she's an editor and a writer in the Washington, DC, area.

Hi, Nicole. So, being on the line with Kristi Yamaguchi is old hat for you now, but how did it feel being able to interview your idol?

Nicole Chung: I definitely felt a sense of awe ... and I just kept thinking ... about watching Kristi skate as a little girl and wishing I could go back and tell my 9-year-old self this was going to happen. But at the same time, I had a job to do and I knew I had to be professional and keep the conversation moving. So, it was definitely a lot of fun. I really enjoyed it.

Take us back to 1992, and you're watching the Olympics. You see Kristi Yamaguchi. She gets a gold medal. What was it about that whole episode that inspired you as a girl?

Well, figure skating is an exciting and beautiful sport to watch. And ... I'll never forget that night, watching Kristi skate for the gold. I was at my grandmother's house sitting on the couch between her two dogs. And my grandmother was ... recording the competition on VHS so I got to watch it over and over.

I was 9 years old and ... when she won ... I felt like I had won, too. You know, the place I grew up was very, very white, and I was a Korean adoptee in a white family. So, I literally did not know anyone who looked like me ... and then I thought of Kristi on TV winning the gold, and I saw her being cheered and I saw her on magazine covers and she was just beautiful to watch and fun to root for. And I thought, "There are places where people like me can be seen and celebrated like that." I had dreams, too, and suddenly, I think all those dreams just felt a little more real and more possible.

Nicole Chung: When we spoke before, you mentioned you hadn't realized how much the gold medal would mean to other people and maybe especially to others in the Asian American community. Can you talk a little bit more about that? And how you realized it was this huge deal and what the support of the community meant to you, then and now?

Kristi Yamaguchi: Absolutely. I think as a 20-year-old ... you're just chasing your dream, [and] it's pretty much just focused on that athlete in you. It definitely wasn't until after receiving that support from the Asian American community ... that's when I start to realize ... my own family history and knowing that I was just one generation away from my family who lost everything and had to rebuild their entire lives and improve their loyalty to this country. So, that's when I realized, "Oh, wow. Yes, I'm able to live out the American dream because of the work and the sacrifices of the generations before me."

I know that you are following and rooting for all the US skaters, but I know you've been a real mentor to Karen Chen. Like you, she's from Fremont [California], I think, and she said she wants to be just like you and follow in your footsteps. I was wondering if you see yourself in her at all?

I met her when she was 12 years old, and at that very first meeting I definitely saw a little bit of me in her and especially when I was a young skater coming up — both of us being very shy and very quiet. But she really was listening to her coach, and in applying the instruction that was given her; and she just had this work ethic ... and I was like, "Wow ... this girl has focus and determination and already has skills that were beyond her age at 12." So, it's been really fun to watch her grow and develop into the skater she is now and to be on the Olympic team.

Did you give her any advice leading up to the Olympics?

I spoke to her right before she left and [I told her,] "this has been your dream. This has been your focus. You're an Olympian now, and you will always be an Olympian. And now it's time to go and enjoy and experience what the Olympics has to offer. Stay in the village and meet these other athletes and really feel that you're a part of the games. You will feel so proud to represent the country and ... Know the USA is back home cheering for you. So, go out there and just really enjoy the moment because ... the work is done now, and you just have to go out there and skate the way you can."

I remember in our conversation, you mentioned you loved growing up in California. And you mentioned its diversity. You know it's also got more than its share of world-class and Olympic figure skaters. [There's] Peggy Fleming and Brian Boitano, you and Karen [Chen] and many more. Do you think there's something about the area that is particularly nurturing to athletes or even to figure skaters, in particular?

I know, it's so interesting because we all had different coaches and skated at different rinks. So, it wasn't like it was a particular training center. But you know, I think just the pool of talent. You know, Peggy Fleming was the first Bay Area native and started that Olympic legacy [there]. So, you know when you have inspirations like that locally, I think it just continues on. Then there's Charlie Tickner who won a bronze medal in 1980, and you know, Debi Thomas.

This current team actually has two Bay Area natives: Karen Chen and also Vincent Zhou in the men's category and who grew up in Palo Alto. So, yeah, very exciting and a strong legacy here in the Bay Area.

Marco Werman: Who were your role models growing up, Kristi?

Kristi Yamaguchi: I had many role models. My first idol in skating and who inspired me was Dorothy Hamill. I started skating in the late '70s, so of course, she was America's sweetheart at the time. And growing up, I looked to other skaters, as well, like Scott Hamilton and Brian Boitano and in particular, Tiffany Chin; she was one of the first Asian American US champions.

And what did seeing Tiffany Chin out on the ice do for you?

I think ... similar to what Nicole said, it was just having a connection with her ... with the Asian American heritage. Seeing someone who looks like you and the possibilities, I think, just opened up in your mind.