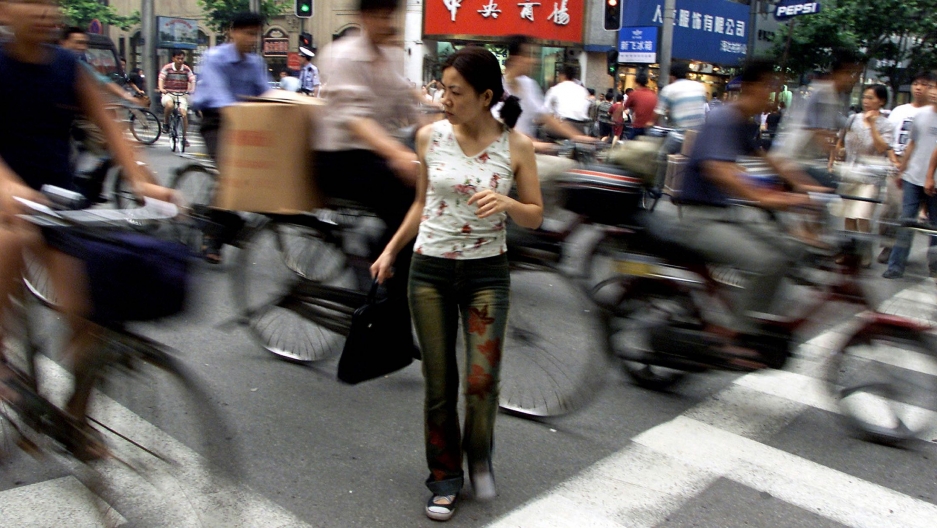 A Chinese woman struggles to cross a busy intersection in Shanghai, July 18, 2002.

I didn’t know I was being sexually harassed. I definitely felt uncomfortable when I traveled with my boss to Shanghai during a college internship. He stayed in the same hotel as me and knocked on my room door in the middle of the night.

After I joined the professional world, I knew it was annoying when one of my clients stared at my breasts at a meeting rather than the presentation I worked on for the entire night. I felt it was a little creepy when men would shake my hand or give me a hug that lasted longer than it should. But I didn’t realize this was sexual harassment. Maybe it was just flirting. Maybe I didn’t understand how relationships functioned in the workplace. I didn’t connect those incidences with sexual harassment because I thought it should be something much more severe, like rape.

With so much coverage of sexual harassment in the international media, it's become a hot topic here in China, as well, at least among the urban elite. The term “sexual harassment” has started to appear in the Chinese media and particularly on social media — on WeChat and Weibo. Harvey Weinstein’s story was widely covered in the main Chinese web portals, including Sina, Tencent and Sohu. Then, we began seeing the #MeToo campaign mentioned in the media overseas.

I’m interested in this topic, not just because I am a woman and have been a victim of sexual harassment, but also because I co-host with Jingjing Zhang (no relation to me) an English-language podcast called Wǒ Men (我们), which means “us” in Chinese. Coincidentally, it also looks like the English-language word “women.” Recorded in Beijing, the podcast is a platform to share our personal experiences and views while looking at the deeper issues affecting women and society in China today.

In October, my co-host sent me an op-ed published by the China Daily, the main English-language state media publication, arguing that sexual assault and harassment don't exist in China because Chinese traditional values respect women. And so, the kinds of stories we were hearing coming out of the United States could never happen here. This was a problem only in the West.

Related: She started #NotYourHabibti to shine a light on sexual harassment in the Palestinian territories

Could this be true?

I began to research more about sexual harassment and realized that it covers a wide range of behaviors, both verbal and physical. Then, my personal experiences and the tales I heard over the years flooded back into my mind. For example, I remembered when one friend quit a job at a large, state-run TV station because she didn’t want to follow the hidden rule to “meet the needs” of her boss. Another friend who worked at the same station received a message from her boss at midnight saying that he would have sex with her if she was with him at that moment. She kept that message as evidence, in case she needed to protect herself someday, she argued.

Yes, sexual harassment does exist in China, whether people want to admit it or not.

In order to find out more about how serious the situation is, my co-host and I began a project on social media, calling for our friends to share their personal stories about sexual harassment with us. Then, we produced an episode based on our findings. The group of people we targeted was a very small sample, so the project was definitely not the most scientific — but the results were stunning.

One woman who worked at a tech company told us about how she had looked up to her boss until they went away on business together. In the past, their relationship had always been professional and amicable. During that trip, though, they were working late nights, and he summoned her to his room. He was sitting on the bed and said, “Come and join me.” She was shocked. He tried to force her. Luckily, she managed to run away. I think this kind of situation happens quite often.

Several of our friends — like me, until now — lack awareness about sexual harassment. They don’t necessarily consider their “annoying experiences” as sexual harassment because it is an alien idea and seemingly very distant from people’s lives. Nobody told them about what sexual harassment is, never mind teaching them how to react and protect themselves from it. They are appalled and scared when they are sexually assaulted, but most of the time, they keep silent or only open up with close, female friends.

There are many reasons for the low social awareness of the topic, including government’s censorship on media and lack of legal and regulatory protection of women. However, I think there is something much more socially profound. I blame the severe lack of sex education in China. My parents never talked about sex with me. My generation had to teach ourselves the concept of sex from the combination of books we borrowed from each other, porn that circulated in the college dorms and popular American TV shows such as “Sex and the City” and “Friends.” Needless to say, these are not the best sources of information. Today’s generation, at least, has the internet — such as it is in China — but I’m not sure the information they are getting online is that much better.

The China Daily op-ed said that women in China are protected by Chinese traditional values. On the contrary, women were once considered possessions by men. My grandmothers were taught the “three obediences” (a woman was required to obey her father before marriage, her husband during married life and her sons in widowhood) and the “four virtues” (fidelity, physical charm, propriety in speech and efficiency in needlework) (三从四德 in Chinese). Women and men were never considered equal.

In Confucian society, the relationship between men and women is hierarchical; men are at the top. In many dynasties in China, if there is an inappropriate relationship between a man and a woman, the woman is always blamed — and sometimes killed by the family or the community, even if she's the victim. In the Qing dynasty, a man would be convicted of rape if the woman died as a result of the attack. If she lived, magistrates might think she hadn’t sufficiently resisted.

My parents’ generation lived through the planned economy. They had to rely on assigned jobs to earn their livelihood. If their bosses were abusive, they didn't have any choice but to “eat bitterness.”

Luckily, I do see more women, especially the younger generation, having much more awareness of the issue and talking about it. One of my friends produces her own podcast in Chinese. The first episode was a discussion of the sexual harassment she and her co-host, a friend of hers, had endured when they were students — they bravely yelled at a man who showed his penis to them and then reported the incident to the police. What’s important is that they described the events in a very funny, lighthearted way. They didn't see this as some humiliating and unspeakable occurrence. Instead, it was just some awful thing that they may encounter from time to time. They used humor to fight back and take back their power.

A case that received more public attention in China is that of Xueqin Huang, a former journalist who was raped by a senior colleague when she was an intern. She recently launched a survey about sexual harassment faced by Chinese female journalists, which is still in progress. Her survey and efforts have been featured in some Chinese media and received a lot of attention.

On Jan. 1 of this year, Qianqian Luo, a former doctoral student at Beihang University in Beijing, publicly accused her professor, Xiaowu Chen, of repeatedly abusing his position and sexually harassing and assaulting herself and other students. The case became a media sensation in China. The university then announced that the professor had been suspended pending the outcome of an investigation.

With increased dialogue in the international media, I am glad to see that at least the younger generation of Chinese elite women are getting involved and showing the courage to step forward and to fight back. Our generation has more options for employment than our mothers’ and a much greater sense than our grandmothers’ and great-grandmothers’ of our own power and identity as women.

No doubt, there is still a long way to go for Chinese women to launch a public #MeToo campaign and enjoy a consensus of social support on the issue, but I am still optimistic. As the Chinese saying goes: After the seeds are planted, they will grow as soon as the spring comes.

Yajun Zhang is the co-host of the Wǒ Men (我们) podcast, an English-language platform to share her personal experiences and views while looking at the deeper issues affecting women and society in China today.