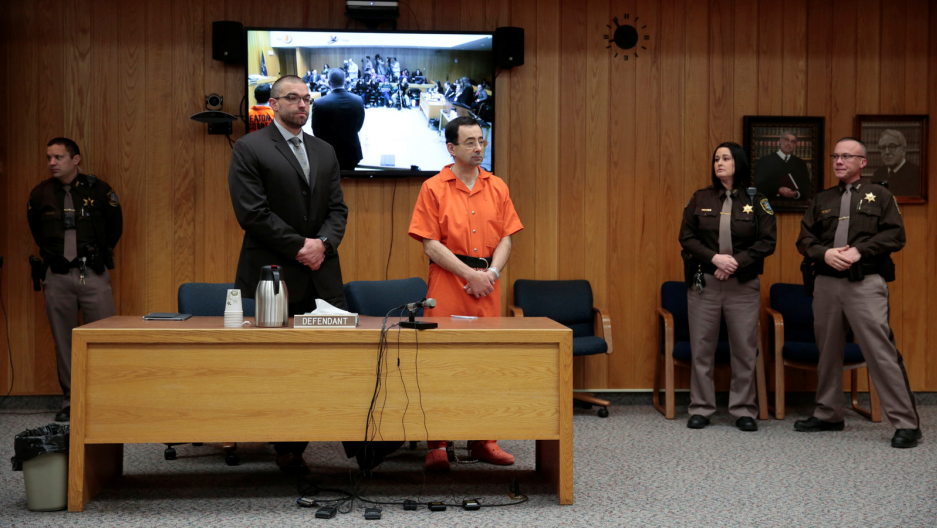 The terms “sexual abuse,” “sexual assault,” “sexual harassment” — and even “rape” — crop up daily in the news. We are likely to see these terms more as the #MeToo movement continues.

Many people want to understand these behaviors and work to prevent them. It helps if we are consistent and as precise as possible when we use these terms.

But what does each term mean?

We are three scholars who have specialized in the scientific study of sexual abuse, rape, sexual assault and sexual harassment over several decades.

Let’s start by defining each of these terms. Then, we can look at how these behaviors sometimes overlap.

The term that has been in the news most recently with reference to sports doctor Larry Nassar’s trial is sexual abuse, a form of mistreating children. Sexual abuse is mainly used to describe behavior toward children, not adults.

All 50 states have laws that recognize that children are not capable of giving informed consent to any sex act. In the United States, the age at which consent can be given ranges from 16 to 18 years.

In 2012, the FBI issued a revised definition of rape as “penetration, no matter how slight, of the vagina or anus with any body part or object, or oral penetration by a sex organ of another person, without the consent of the victim.” The revised law is gender neutral, meaning that anyone can be a victim.

When carefully examined, the FBI definition does not look like most people’s idea of rape — typically perpetrated by a stranger through force. The FBI definition says nothing about the relationship between the victim and the perpetrator and it says nothing about force. It does, however, say something about consent, or rather, the lack of it. Think about consent as your ability to make a decision about what happens to your body.

A perpetrator can compel a victim into a penetrative sex act in multiple ways. A perpetrator can ignore verbal resistance — like saying “no,” “stop” or “I don’t want to” — or overpower physical resistance by holding a person down so they cannot move. A person can penetrate a victim who is incapable of giving consent because he or she is drunk, unconscious, asleep, or mentally or physically incapacitated; or can threaten or use physical force or a weapon against a person. Essentially, these methods either ignore or remove the person’s ability to make an autonomous decision about what happens to their body. State laws vary in how they define removing or ignoring consent.

Perpetrators can’t defend against charges of rape by claiming they were drunk themselves or by saying they are married to the victim.

Rape and sexual assault have been used interchangeably in coverage of events leading to the #MeToo movement, and this practice, though unintentional, is confusing. In contrast to the specific criminal act of rape, the term sexual assault can describe a range of criminal acts that are sexual in nature, from unwanted touching and kissing, to rubbing, groping or forcing the victim to touch the perpetrator in sexual ways. But sexual assault overlaps with rape because the term includes rape.

Social and behavioral scientists often use the term “sexual violence.” This term is far more broad than sexual assault. It includes acts that are not codified in law as criminal but are harmful and traumatic. Sexual violence includes using false promises, insistent pressure, abusive comments or reputational threats to coerce sex acts. It can encompass noncontact acts like catcalls and whistles, which can make women feel objectified and victimized. It includes nonconsensual electronic sharing of explicit images, exposure of genitals and surreptitious viewing of others naked or during sex.

Sexual harassment is a much broader term than sexual assault, encompassing three categories of impermissible behavior.

One is sexual coercion — legally termed “quid pro quo harassment” — referring to implicit or explicit attempts to make work conditions contingent upon sexual cooperation. The classic “sleep with me or you’re fired” scenario is a perfect example of sexual coercion. It is the most stereotypical form of sexual harassment, but also the rarest.

A second, and more common, form of sexual harassment is unwanted sexual attention: unwanted touching, hugging, stroking, kissing, relentless pressure for dates or sexual behavior. Note that romantic and sexual overtures come in many varieties at work, not all of them harassing. To constitute unlawful sexual harassment, the sexual advances must be unwelcome and unpleasant to the recipient. They must be “sufficiently severe or pervasive” to “create an abusive working environment,” according to the US Supreme Court.

Most sexual harassment, however, entails no sexual advance. This third and most common manifestation is gender harassment: conduct that disparages people based on gender, but implies no sexual interest. Gender harassment can include crude sexual terms and images, for example, degrading comments about bodies or sexual activities, graffiti calling women “cunts” or men “pussies.” More often than not, though, it is purely sexist, such as contemptuous remarks about women being ill-suited for leadership or men having no place in childcare. Such actions constitute “sexual” harassment because they are sex-based, not because they involve sexuality.

In lay terms, sexual coercion and unwanted sexual attention are come-ons, whereas gender harassment is a put-down. Still, they are all forms of sexual harassment and can all violate law, including Title VII of the Civil Rights Act of 1964.

Historically, social attitudes towards all these hostile actions have assumed a continuum of severity. Sexist graffiti and insults are offensive, but no big deal, right? Verbal sexual overtures cannot be as bad as physical ones. And, if there was no penetration, it can’t have been all that bad.

These assumptions do not hold up to scientific scrutiny, however. For example, researchers at the University of Melbourne analyzed data from 73,877 working women. They found that experiences of gender harassment, sexist discrimination and the like are more corrosive to work and well-being, compared to encounters with unwanted sexual attention and sexual coercion.

We have tried to clarify terms that are now becoming household words. Of course, life is complicated. Abusive, assaulting or harassing behavior cannot always be neatly divided into one category or another — sometimes it belongs in more than one. Nevertheless, it is important to use terms in accurate ways to promote the public’s understanding.

Finally, we take heed that society is in a period like no other and one we thought we would never see. People are reflecting on, and talking about, and considering and reconsidering their experiences and their behavior. Definitions, criminal and otherwise, change with social standards. This time next year, we may be writing a new column.