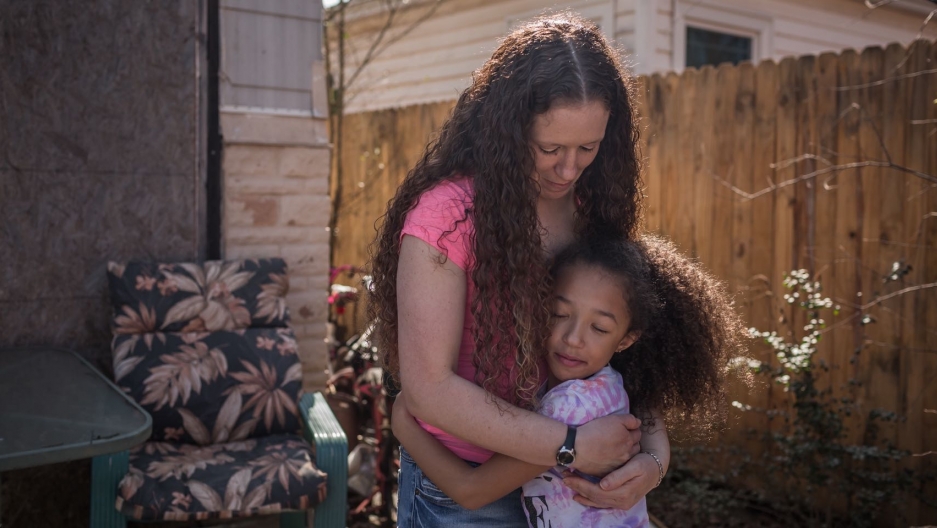 Cherise Greer, 33, who lives in Duncan, Oklahoma, spent two years behind bars. She says she's determined to move on and she doesn't want to miss any more time with her daughter.

That’s something that Mo Korchinski, who was formerly incarcerated, says she’s now trying to give other women coming out of prison. Korchinski, who runs a peer support program in Canada, is just one of the women profiled in our two-week series, “Unequal Justice,” which delves into the global problem of rising incarceration rates for women. In most places, the increase is tied to drugs.

A number of stories in our series highlight efforts to help women get clean and stay out of prison. Like this unique drug treatment program in Ohio, which focuses on “healing mind, body and spirit.” Or Canada’s First Nations Court, which offers restorative justice to Indigenous people. And the push in Thailand for “harm reduction,” a European-style legal approach that treats drug users as patients, not villains.

If you’d also like to get involved in solving the problem and help women who’ve been incarcerated, we’ve compiled a list below of organizations and programs focused on the issue and that need support.

Keeping mothers and their children together

At this Mexico prison, incarcerated women are able to keep their children with them for several years, in some cases until the child is as old as 6. Programs like the one at Santa Martha Acatitla draw on studies that argue that the emotional attachment between baby and parent is essential to early child development.

If you’d like to know how programs in the United States stack up, check out this state-by-state report card of policies related to incarcerated women who are pregnant or parenting. Or consider donating to Hour Children, a program in Bedford Hills, New York, which helps women in prison access transportation for their families, parenting education and toys and other resources for their children.

Cheyenne Sharma received legal representation from Aboriginal Legal Services Toronto after being arrested on drug trafficking charges. ALS’s mission is “to strengthen the capacity of the Aboriginal community and its citizens to deal with justice issues and provide Aboriginal controlled and culturally based justice alternatives,” its website states.

Similarly, restorative justice programs like First Nations Court in Vancouver, British Columbia, offer legal help and a court experience that aligns with the values and expectations of Indigenous people.

“We remind the ones that we’ve seen in pain, we remind them that we are here and that we believe that our culture is our healing,” says Doris Paul, an elder with First Nations Court.

You can find ways to donate to ALS here. Similarly, there are legal aid options for Aboriginal people in Australia’s Victoria and New South Wales.

Monitoring drug policies around the world

Several stories in the series emphasize connections between the implementation of stricter drug policies (such as mandatory minimum sentences) and the disproportionate incarceration of women.

That’s something that Pittaya Jinawat, a veteran anti-narcotics agent and policy czar in Thailand, is focused on. He’s nudging police chiefs and judges into seminars that promote “harm reduction.”

You can donate to Harm Reduction International, a nongovernmental organization that works “to reduce the negative health, social and human rights impacts of drug use and drug policy by promoting evidence-based public health policies and practices.” Or, explore resources provided by the International Drug Policy Consortium that’s aimed at increasing knowledge about the global reach and unintended effects of drug policies.

Providing resources to women getting out of prison

Mo Korchinski, who’s been in and out of prison, works for Unlocking the Gates Peer Mentoring Program. The program's mentors literally meet women where they are upon release, providing them with safe transport from the prison gates. Mentors also go with them to get the resources they need to start fresh, like housing and job counseling.

Women often are coming out of prison with “very few belongings in a clear, plastic bag and a bus ticket back to where they were arrested from. A lot of the women don’t want to go back to that. But there are very few places for women to go when they get released,” Korchinski says.

To learn more about her program, check out the Unlocking the Gates to Health Facebook page. Another organization doing similar work is the A New Way of Life Reentry Project in Los Angeles. It's looking for donations and volunteers.