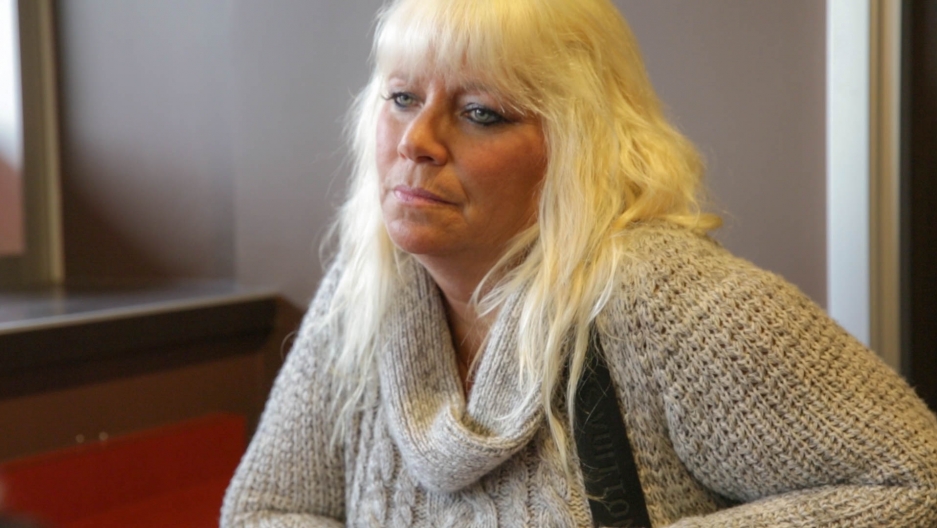 Mo Korchinski spends her days helping women coming out of prison get back on their feet.

Mo Korchinski has been there, done that.

She’s been in and out of prison in Canada numerous times for cocaine trafficking. Korchinski sold to support her drug addiction. But after years of cycling through the prison system and back onto the street, she went to a treatment program, got clean and set her life on a new track. She went to college and earned a bachelor's degree in social work. And now, she runs a peer support program for women coming out of prison. As the project administrator for Unlocking the Gates Peer Health Mentoring Program in Vancouver, British Columbia, she works with women who need help in the first 72 hours after their release.

Korchinski and other peer mentors help women get clothes, medication, shelter — the basics to get them started. Korchinski spoke with The World about her past and the work she does.

The World: How often do you get calls a day from women in prison?

Mo Korchinski: Anywhere from two to 10 calls a day. It's large. Most of them are usually looking for somewhere to go. From our research, we've found that 85 percent of women in our provincial prison are homeless upon release.  And no one wants to be homeless, right? They are coming out with very few belongings in a clear, plastic bag and a bus ticket back to where they were arrested from. A lot of the women don’t want to go back to that. But there are very few places for women to go when they get released.

We had a problem with one of the taxi drivers. Taxis used to pick up the women from the prison. I remember getting propositioned by a taxi driver: "Hey, give me a blow job, and I’ll give you some dope — or I’ll give you some money." And it actually happened to one of the girls [being released]. He actually propositioned her; she OD’ed and ended up in a coma. So, now, the jail does not use the taxi service because that was one of the most vulnerable times. So, now, the jail actually has an officer who drives them up to the bus depot.

No one wants to grow up and say, "Hey, I’m going to become a drug addict, and I’m going to be homeless on the street." I mean, there’s a reason why someone is numbing their whole feelings — because you don’t have any feelings. You are totally numb when you are using and that’s what you go for ... that’s one thing that attracted me to the drugs, was that it numbed all the hurt from my childhood abuse.

At what point did drugs become a key part of your life?

My first drug of choice was alcohol and that was when I was 12 years old. And then I stayed as an alcoholic — you know, functioning alcoholic. I got married, had children. And then the night my mom died of cancer, I picked up the cocaine. And it was like love at first sight. You know, I thought alcohol numbs your feelings, but no, cocaine definitely numbs you.

How long was cocaine numbing you?

About seven years. As soon as I got into the cocaine, I ended up in jail. I sold cocaine to support my habit. I mean, you have to do something to support that habit. Having a drug habit is not cheap. That’s how people end up going to jail — trying to support their drug habit. It’s petty crime like selling drugs or shoplifting. It’s all about trying to find a way to support that drug habit. We always say if we deal with the addiction, we deal with the crime and they won’t end up back in jail. We don’t look at the reason why somebody goes to jail; we just add more problems to people when they go to jail.

How many times were you incarcerated?

You have three children. How old were your kids the first time you went in?

Before I went to jail, I already walked away from my children. And I left my kids with their fathers. I just never went back. I always thought my kids were better off without me, anyway. Even today, as much as one of my kids was super angry and has huge resentment and probably will never get over it, I still say that my children were better off with their fathers. They had loving fathers, grandparents, cousins, aunts and uncles. And being around a mother who didn’t even know how to love herself — no longer loving another person — yeah, I still think they were better off.  Everybody on the street is somebody’s child or somebody’s parent.

Because everybody needs hope. Everybody needs a purpose. It’s part of who we are as human beings. If you don’t have either, what do you have? You are just existing. And we can’t just exist. We have to have a purpose.

Oh, definitely. It’s interesting because they’ll call, and I’m like, "Really? Aren’t you sick of this lifestyle yet?"

What did it for you to help you get clean?

For me, I turned 40 in jail. It was that milestone of turning 40. And my jail sentences were long, and I got to form relationships with the staff and recreational therapists. I had an amazing Aboriginal elder who loved us no matter what, was very nonjudgmental and so, when there came an opportunity for me to go to treatment, I didn’t want to let them down. They believed so much in me. They [saw] good in me when no one had seen good in me before, and I just didn’t want to let them down. And that’s what I like to do with the women that I work with, is believe in them. Because everybody needs someone to believe in them.

Editor's note: This interview has been lightly edited for clarity.