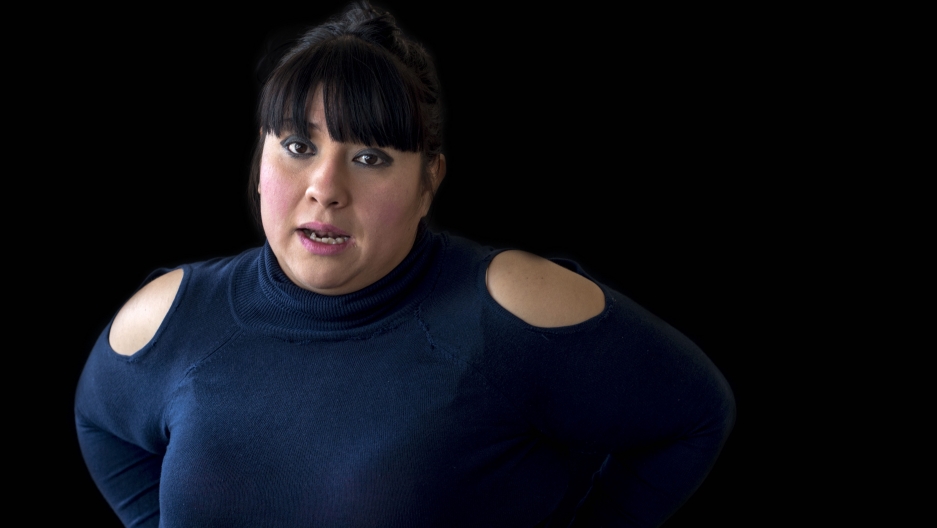 Nancy Polanco Najera worries that her 4-year-old son, Alexis, has started to figure it out. “He’ll be watching TV, the news, and they’ll talk about someone who is being sent to Santa Martha prison. And he’ll say, ‘We live there!’ And he’ll ask, “Why do we live here?””

He’s beginning to realize that they are locked up, that they live in Santa Martha Acatitla, a maximum security prison on the outskirts of Mexico City.

“I got here when I was 19,” she says, sitting in a shady spot on the patio. “I’ve practically lived my whole youth, my whole life in prison, you know?”

There’s something disarming about 34-year-old Polanco — with her soft lisp, bubble-gum pink lipstick and childlike bangs. She was sentenced to 40 years in prison along with several of her family members, including her father (who died some time ago, while in custody), for kidnapping. She claims she’s innocent — that her father was mixed up with a gang, and she wasn't involved. She says that when she was brought here “what I most wanted was to die.”

Since then, Polanco has adjusted to prison life in some ways. Her mother and sister are in the same prison with her. Mostly, she’s glad to be around family — especially her son. She and Alexis are inseparable; he's a sweet, sleepy-eyed, shy little boy, but he screams joyfully as she chases him around the playground.

She met Alexis's father in prison. She says the pregnancy was a happy surprise — she was on birth control at the time. Before Alexis came along, she was so lonely. Her son, she says, has made her a better person. She realizes it may come off as selfish, bringing a little boy into this, though.

In Mexico, by law, children born in prison can stay with their mothers until the age of 3. The age cap was recently lowered from 6, but it isn’t retroactive, so it doesn’t affect children like Alexis, Santa Martha prison officials say. And there’s a push by some, including Claudia Corichi García, the federal deputy for the state of Zacatecas, to change the age back to 6.

According to a survey by the Mexican Human Rights Commission, there were 618 children living behind bars in Mexico in 2016. That’s compared with 396 children in custody in 2013. It’s an alarming but unsurprising trend, considering that the number of women going to prison for drug-related crimes in Mexico has skyrocketed in the last few years.

The idea is that keeping babies with their mothers is the most humane option — that Alexis is better off at Santa Martha with his mom, dad, aunts and grandma. Many countries around the world allow babies born in prison to stay with their mothers for some time. UNICEF estimates that over a million children are in prison, worldwide, from Europe to Asia. In fact, the US, where prison nurseries are few and far between, is an outlier.

There's been plenty of debate about whether keeping children in prison is the right thing to do. Supporters cite studies indicating the importance of infants developing an attachment to a primary caregiver and research showing that this can be successful in the prison nursery setting. But critics say that any caregiver can bond with a baby — an adoptive parent, a grandmother, an aunt. Why keep a child in jail?

The number of children living inside Santa Martha Acatitla prison fluctuates between 60-100 — a large enough group that the prison has its own elementary school, or la escuelita.

As the nickname implies, it’s a small school — with just four rooms, a cafeteria and a gym. On a mid-March afternoon, a dozen kids file into a classroom here. The children are learning the alphabet. The lesson is interrupted when one boy sticks his tongue out at a girl. The teacher is quick to reprimand him and move on.

With its tiny tables and colorful posters, this classroom could be anywhere in the world. Except, at the end of the day, the kids and their mothers will go back to their cells. And when kindergarten is over, the kids will leave to live on the outside. 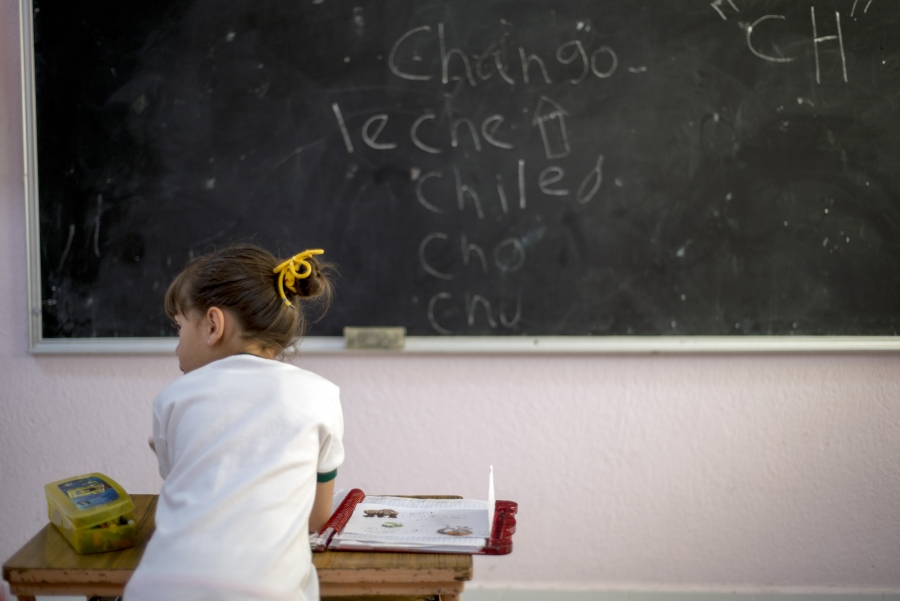 At Santa Martha Acatitla prison, the population of children fluctuates. Right now, it has about 60 children, enough for the prison to have its own elementary school.

For Polanco, it's distressing thinking about how in just two years, Alexis will be gone, permanently. The problem is, the whole family is in prison. There’s no one left on the outside to take him, except an aunt in the US. But that will mean an international adoption process, and Alexis will have to get a visa.

She talks to him about this sometimes, but it’s hard to explain — how they won't live together forever. And why. She always gets emotional, and he hugs her.

In Mexico, a ‘complicated situation’

It’s hard to say what happens to boys and girls like Alexis when they leave prison. The women's rights organization, Equis, which has studied the issue, found that while Mexico is incarcerating more and more women, efforts to take care of their children remain haphazard at best.

“We have a very complicated situation in Mexico because there aren’t really institutions, like in the US, social service institutions that follow up on what happens to a kid when his mom is incarcerated,” says Equis director Ana Pecova. "So, there’s this situation where no one knows where the kids are. Some kids live with these women, in prison. But some women have to leave the kid with family. A brother, a neighbor. Some women don’t even have that, and the kids end up in orphanages, nunneries."

Pecova says prison isn’t the solution, and she advocates for alternative forms of punishment.

“The impact of incarceration is on women but it’s also on communities,” says Pecova. “That’s why we propose alternative measures. Perhaps house arrest with certain requirements. If the Mexican state cannot take care, cannot offer institutions to help these women and communities, we can’t just put women in jail and leave so many people in the communities hanging.”

There have been some efforts here in recent years to do just that. In 2009, Mexico established its first drug court, in the state of Nuevo Leon, a place heavily affected by addiction. The idea was to offer rehabilitative services for addicts instead of jail time. Since then, there have been a handful of drug courts set up in various states but they’ve been riddled with accusations of incompetence. In 2016, a national law established the basic human rights of inmates and addressed the needs of women behind bars. Perhaps the proposal that would most help women like Polanco came a few years back: to allow pregnant women to serve house arrest, rather than prison time.

In downtown Mexico City, 8-year-old Isabel lives with her adoptive father, Jesus Buendia. Isabel isn’t her real name — her family asked to protect her anonymity since her mom was involved in a high-profile drug case.

He's a stay-at-home dad but used to be a social worker in the prison system. His job was to work with inmates with upcoming releases and gauge what kind of support system they had on the outside.

At some point, he found out about a distant relative who had been sentenced to a notoriously rough facility and gave birth there. He visited, and that’s when he met Isabel. “I lifted her up. I thought she was just so sweet. And at the same time ... I had a lot of questions. Like, ‘Why is this kid in here?’ She got roll called like all the other inmates. She’d get up like all the inmates. They allowed her to go for walks like all the inmates. And that gave me this tenderness, and I just thought it was so strange.” 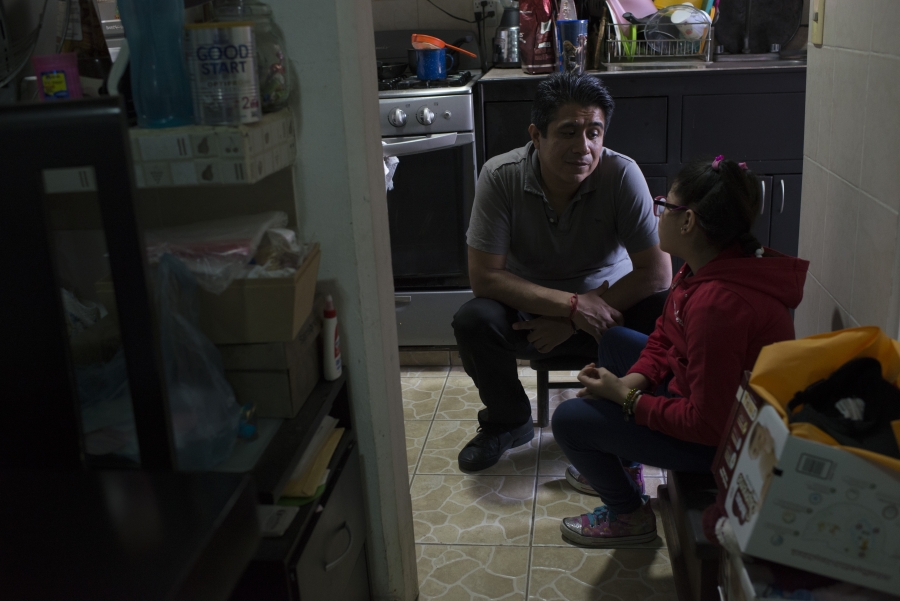 Jesus Buendia speaks to Isabel, his daughter. Isabel was born in a notoriously rough prison, and was adopted by Buendia, a distant relative, when she was 4 years old. She's 8 now.

He kept on coming to see them. Eventually, he learned that Isabel would soon have to leave the prison. The problem was, her immediate family was incarcerated — Isabel’s aunt, her grandmother. There was simply no one out there to take her.

Buendia decided to legally adopt Isabel. He remembers the day he went to get her. “Her mother was so sad; her face fell. And I said to her, ‘Listen. The way you feel right now ... that’s how I’m going to feel when you come back for her. So, I’m asking you to be strong. If you’re strong, I’ll be strong.’”

Isabel’s mom has nearly 15 years left on her sentence. By the time she gets out, Isabel will be a young woman.

In the first days after Isabel came home, reality sunk in. Isabel wasn’t like other 4-year-olds. “She didn’t know how to drink from a bottle or with a straw. She had never been close to a tree” or been around other children.

Things got worse before they got better. Isabel has long-standing health issues. A few years ago, she suffered a stroke, which left her with physical impairments. Also, Buendia says, there have been behavioral issues, which he chalks up to those first years in the prison. She has an obsession with structure and gets upset when routines are broken. They’ve been working with specialists for years.

It’s been an uphill battle. And in between, she’s just your average 8-year-old girl. She’s a picky eater, loves sing-a-long YouTube videos and begged Buendia for roller skates until he caved in. One thing that troubles him is Isabel's relationship with her mom. Their calls get shorter all the time. But he reminds Isabel that one day, they'll be back together.

Back at Santa Martha, Alexis seems like a happy, well-adjusted kid. He gets psychological support, food, school and even the occasional field trips.

But Polanco worries about what happens later and the fact that Alexis has to take a bus to see his dad, who is serving time in the nearby men’s penitentiary. That it'll seem normal to him. “I know he’ll reach an age in which he’ll say, ‘Why were you in there? And how did you meet my dad?’”

Whenever he comes back from a field trip, he tells her he misses her. That concerns her, too. What will he do when she’s not there for him?

Still, Polanco has high hopes for her son — that he’ll fare better than the men in her life.

“I want to make Alexis into something different than everything I’ve known.”