The University of Alabama football team is visiting the White House, again, on Tuesday to receive its congratulations. Back in January, Alabama captured its fifth college football championship in nine years, an unprecedented run of success (unless you go back to Princeton and Yale’s dominance in the late 19th century).

The recent national championship games have drawn some foreign eyeballs, from Mexican to Russian television viewers. Sure, most Russians probably aren’t following the Crimson Tide football team very closely, if at all. But Jo Bonner, a six-term US Congressman from Alabama who now works with the university, said the team’s success is paying international dividends.

“The brand is internationally known, it’s something that we’re proud of because it represents excellence. It represents hard work and determination,” Bonner said.

But can you translate that excellence into numbers? Fifteen years ago, the campus in Tuscaloosa had 20,000 students, mostly from Alabama.

“Fast forward to today, we have over 38,000 students from all 50 states and from more than 72 different countries,” Bonner said.

The Tuscaloosa campus has seen the number of foreign students more than double over the span of a decade. (Numbers are down slightly this academic year, with 1,154 foreign students, compared to a high of 1,670 three years ago.) But how much of that growth has to do with the football team?

“It’s very difficult to say whether they came because of the football game, or because of the scholarship or because of our academics,” said economist Ahmad Ijaz, director the University of Alabama's Center for Business and Economic Research.

Related: Fewer international students coming to US for grad school in science and engineering

Ijaz can determine that each home football game brings the state $25 million in tax revenue. The school also annually takes in tens of millions more in ticket sales, advertising, and television fees. What Ijaz can’t measure, however, is if any of Alabama’s international students were attracted to Tuscaloosa because of its winning ways.

“It can be done, but then you’ll have to go out and survey every student,” said Ijaz.

How about a survey of one? Ijaz is an alum of the University of Alabama and was born and raised in Pakistan. Had he heard of the Crimson Tide when he was a kid and Alabama was winning championships under legendary coach Bear Bryant?

But this is 2018, the age of smartphones, where a kid in Lahore can watch whatever he wants from the palm of his hand. But would he want to watch Alabama football?

Caitlin Kelley, the university’s associate director for international admissions and recruitment, regularly attends college fairs and high schools in places like India. When she mentions the football team back home, she gets blank stares.

Kelley does say that prospective students she meets in Mexico, Canada, Australia and the United Kingdom are more interested in Alabama’s football team. And maybe the students will soon also be engaged that way in China. 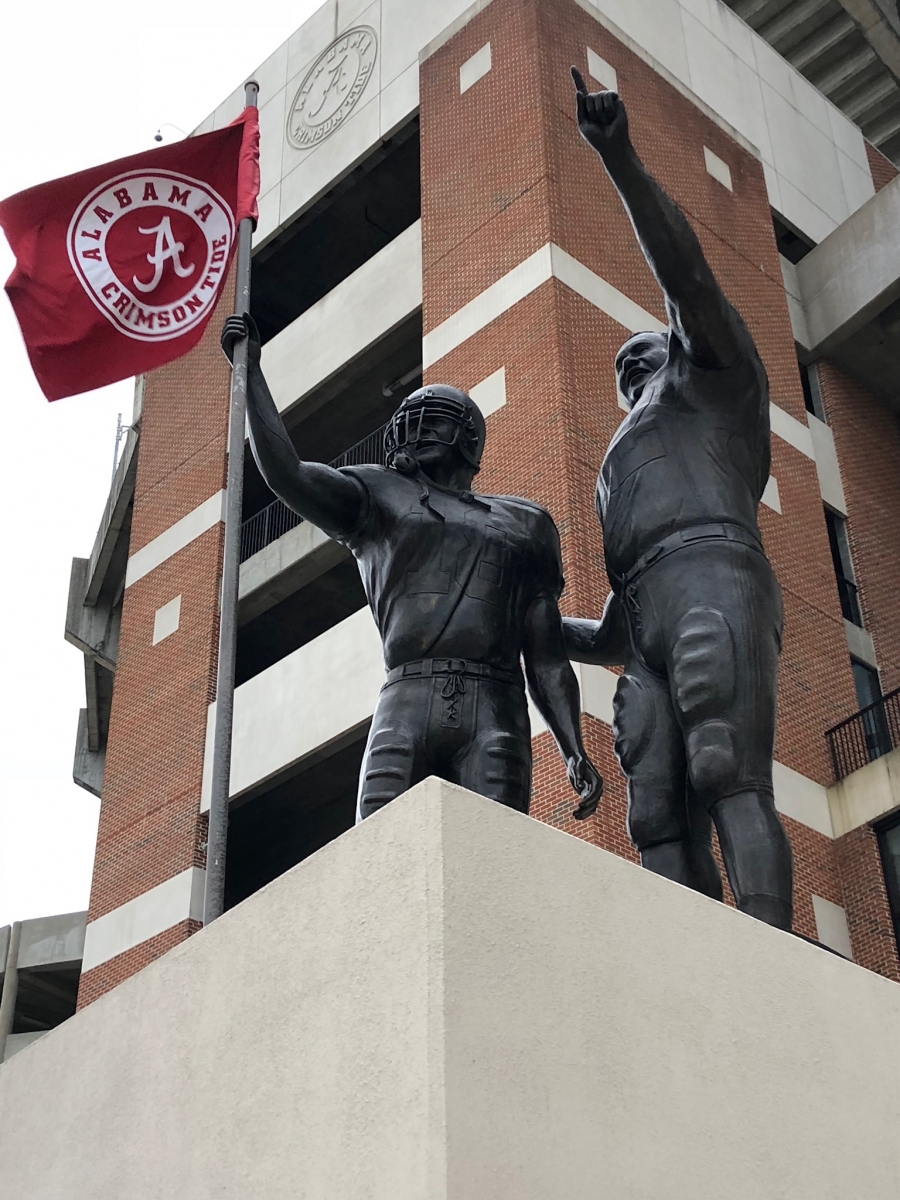 Statues adorn the “Walk of Champions” outside of the University of Alabama’s Bryant-Denny football stadium, the seventh-largest stadium in the US.

Evan Li does recruiting and marketing throughout China. He said prospective Chinese students that he speaks with don’t have a clue about American football. Still, he mentions the winning team back in Tuscaloosa as part of his sales pitch to Chinese high school students.

“They’re looking for brand-name schools back in the States. The only brand names, or famous schools, they know are Harvard, Yale, Stanford, Princeton, maybe UCLA. And that’s it. So I’m trying to tell them that our school is famous in America too because we have the No. 1 football team,” said Li.

“They don’t really care at the beginning. However, when I tell them, since we have the No. 1 football team, that means we’re well-known in the States,” said Li. “Secondly, we made a lot of money, so we can reinvest back into our school. We can have better facilities, our school is a flagship school in America, and is growing real fast.”

And their reaction then?

Related: How Alabama is becoming the auto capital of the South

Still, he said, his work is very much a work in progress. Li’s only been on the job since last summer and has some ideas how to use Alabama football to increase the numbers of Chinese students in Alabama: 467 Chinese students were enrolled in 2017.

Li said it would help his efforts if more Chinese were exposed to the game, and he would love it if, for example, some Mandarin-speaking broadcasts came out of Tuscaloosa.

He also wants Chinese people to understand that football is more than just a sport; it's a bonding social event, a way to create friendships and bring people together. Especially in Alabama. When alumni see each other, they often don’t say, "hello." They say, “Roll Tide.”