Toyota Motor Manufacturing Alabama builds about 3,000 engines a day at its plant in Huntsville, powering one third of Toyota vehicles produced in North America.

Back in January, President Donald Trump put the national spotlight on Alabama's manufacturing economy with a boast in his State of the Union address.

“Toyota and Mazda are opening up a plant in Alabama — a big one — and we haven’t seen this in a long time. It’s all coming back,” the president said, eliciting applause.

He also said the US hasn’t seen expanding auto plants in “decades.” That’s not true. And certainly not true in Alabama.

Alabama’s auto sector has taken off in the past 20 years. From next to nothing, it has become the fifth-largest state for auto manufacturing, fueled by German and Asian carmakers, and it's growing. With new jobs coming, analysts expect Alabama to move up in state auto manufacturing rankings in coming years.

But 25 years ago, nobody thought of Alabama as somewhere to build cars. The state was known as a place to make textiles and apparel. Then in 1993, Alabama lured in the German automaker Mercedes-Benz with more than $250 million in incentives, a jaw-dropping offer at the time.

“And they pulled the big drape off the Mercedes star that had been affixed in one of the end zones and there were some boos,” Bonner said. “State officials were being introduced, and there were some people who thought we were crazy and had given the farm away.”

Today, those state officials might feel justified in the high price tag to lure Mercedes. Since then, the state has lost 88 percent of its textile economy, or 82,000 jobs. Auto jobs have replaced some of that: Roughly 40,000 people now work in Alabama’s automotive sector.

Besides Mercedes, Japanese and Korean automakers Honda, Hyundai and Toyota have operations in the state.

“At Toyota Motor Manufacturing, Alabama, we are currently producing 3,000 engines a day. Those go into five of 10 vehicles built in North America,” said Kim Ogle, a Toyota communications analyst, while walking around Toyota’s plant in Huntsville, now the state’s third-largest city.

Related: From Ford to Foxconn: A History of Factories

It’s a huge, sprawling factory with a highly sophisticated technological assembly line, but also with some rudimentary, yet clever, communication systems. Communication boards routinely light up, and classical music plays over the public address system. It’s a way for employees to “talk” across a loud expansive factory.

For example, playing Beethoven or Bach might mean it’s time for a supervisor to perform a quality check. The Indiana Jones theme could signify that someone needs help.

In a few years, Toyota and Mazda will add more music and some 4,000 more employees at their joint operation. To lure the Japanese automakers, state and local governments again offered incentives — more than $700 million in tax abatements, promised infrastructure improvements such as a railroad spur, and project site work for a factory.

“Tax incentives are nothing more than an investment,” Huntsville Mayor Tommy Battle said. “In my business world, I would invest in a business and then expect to make money off of it. This is the same thing. We invested in this business.”

These are non-union jobs. Still, the average salary at the plants is expected to be $50,000. And Battle says with the economic multiplier effect, all those salaries could support 10,000 more local jobs.

“A person who might work at the drugstore or work at the grocery store, maybe build them a house or something,” Battle said.

Over 20 years, local policymakers are projecting a $5.6 billion return on investment for Alabama. 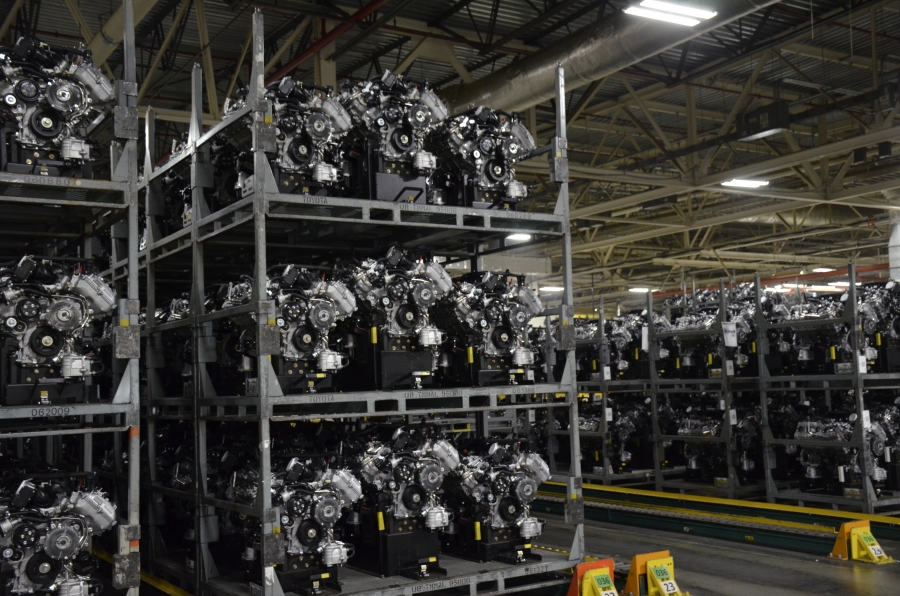 Roughly 1,400 people build Toyota engines at the company’s plant in Huntsville. Its new joint operation with Mazda, to be built nearby, is expected to employ 4,000 people.

In op-eds, critics write that local taxpayers are again giving away too much, and that tax incentives are a risky strategy. But Alabama’s incentive package was comparatively modest. North Carolina dangled $1.5 billion dollars in incentives for Mazda and Toyota — roughly double what Alabama offered.

A Toyota corporate spokesperson said the company chose Alabama because of the location, infrastructure, and quality of life in Huntsville, as well as the local workforce: Residents come ready for the job, with help from the state.

In the city of Vance, Alabama, Mercedes-Benz and AIDT have set up a large training center adjacent to the auto factory. Classrooms have stations where students can simulate the movements they’d need to master as a Mercedes employee.

“We have been partnering with Mercedes for a little bit over 20 years,” said Yvonne Crenshaw, AIDT’s project manager at Mercedes-Benz. She showed off a simulation in a classroom. “We set it up in conjunction with Mercedes because we wanted to make absolutely sure that our processes fit what they really wanted, and what they wanted their employees to look like,” said Crenshaw.

She said AIDT determines if the students would be a “good fit” for the company before recommending them for a job.

“Automotive classes, engine breakdown, you had a brake class learning brake dynamics,” Nichols said, rattling off some of the courses he took.

He started with classes at a local community college. After finishing, Nichols transferred to Mercedes-specific classes at the on-site training center, earning $16.50 an hour while training.

“Inside the plant we have more specialized [Mercedes] tools that we get to use,” Nichols said.

For example, Iowa helps train future employees for John Deere, and Illinois gets people ready for Caterpillar. Swenson says it’s an effective way for a state to keep residents from leaving.

“What Alabama, though, is probably doing, is basically patting themselves on the back for being responsive and having very good feedback, i.e., their students are getting hired into industrial jobs that are relatively good jobs,” Swenson said.

But, Swenson adds, if the US goes into a recession, taxpayers may get angry and ask: What is the appropriate role for public education? And why are we paying to train workers for a specific corporation — a highly profitable one — that’s not hiring?

Swenson said that in the South, there’s been one big draw for foreign automakers that rises above all else: cheaper labor.

“Initially, half of the propensity to move plants was to escape union contracts and to take advantage on non-union right-to-work states,” Swenson said.

Many union folks up in Michigan see Southern states and non-union wages as a race to the bottom.

Steve Sewell in Birmingham views things differently. He’s with the Economic Development Partnership of Alabama, a business-funded organization that works to attract industry to the state. To him, it’s not about a competition between Alabama and Michigan.

“I don’t see how it can hurt anyone when we attract foreign investment to the United States that creates jobs. They’re making contributions to not only our economy in our state, but to the nation’s economy as well,” Sewell said. “They’re exporting products worldwide, so they’re a contributor to the US economy.”

Alabama shipped nearly $8 billion worth of cars to 88 nations last year. Sewell and others argue that the state’s car boom has helped lure other foreign manufacturing — from Australian ships to European airplanes.

“The automotive industry and the success that we’ve had in economic development has probably done more to address misperceptions about Alabama, and the image issue of Alabama, that the state might be a backwater or a more backwards state,” Sewell said. “It’s demonstrated that we can be a global competitor.”

And who knows? If the state continues to land foreign contracts, maybe Alabama will get another mention in next year’s State of the Union address.