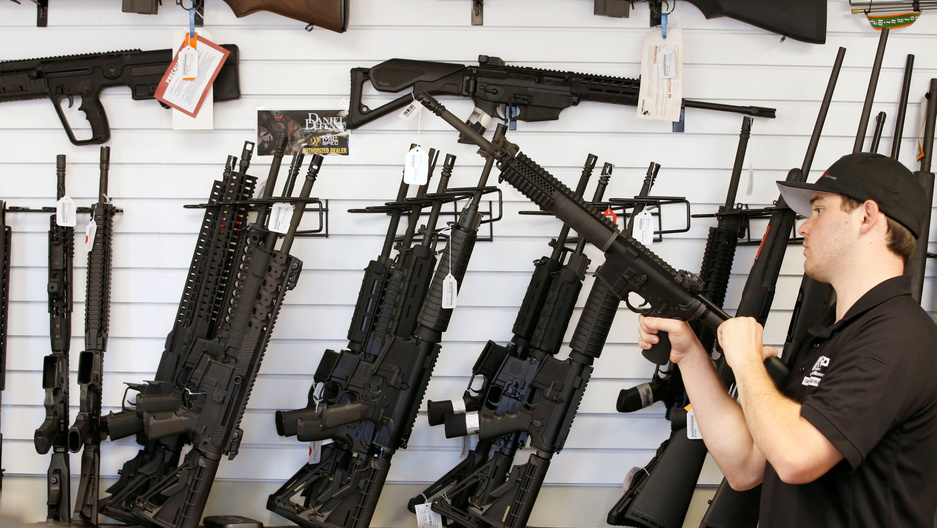 Salesman Ryan Martinez clears the chamber of an AR-15 at Ready Gunner, a gun store in Provo, Utah.

There are many things about the Parkland, Florida, high school massacre that are depressingly familiar. One is the weapon used by the 19-year-old suspect.

It was an AR-15. The same lightweight, semi-automatic rifle used in many other mass shootings, including Newtown in 2013, San Bernardino in 2015, and Las Vegas and Sutherland Springs last year.

Local media in Florida report the suspect bought his gun legally. In Florida, there's no waiting period for would-be buyers of rifles or other long guns.

The National Rifle Association has called the AR-15 the "most popular rifle in America," and estimates Americans own more than 8 million of them. The NRA says the gun is popular because it's "customizable, adaptable, reliable and accurate." Those features may also explain why it's also become a weapon of choice for mass shootings.

Peter Squires, a specialist in gun violence at the University of Brighton in England, says the way the AR-15 has been marketed by Colt, its manufacturer, has added to its appeal.

"On the one hand, the kind of propaganda of fear is encouraging people to buy and have available the next best firearm on the market," says Squires. "The whole raft of characteristics claimed for the AR-15 suggest it is a tough and resilient gun and only a real man can handle this kind of firepower."

A standard AR-15 magazine holds 30 bullets. But in most states, including Florida, the rifles can be legally outfitted with high-capacity magazines that can hold more rounds. The suspect in yesterday's shooting reportedly had multiple magazines when he surrendered to police.

Related: After a mass shooting, thoughts and prayers. But then what?

There are several US states that have laws limiting or banning the sale of assault weapons. California, for example, has banned AR-15s and other rifles with detachable magazines, which allow shooters to quickly reload.

"They are the types of weapons that are being most misused in the recent mass shootings," says Squires. "They enable people to kill a lot of other people very, very quickly."

In 1994, President Bill Clinton signed the Assault Weapons Ban that prevented the sale of certain military-style assault weapons for private citizens, and set a limit on high-capacity magazines of no more than 10 bullets. But the ban only applied to new weapons and it included a sunset provision — which means Congress needed to reauthorize it.

Congress did not reauthorize it and the ban expired in 2004.