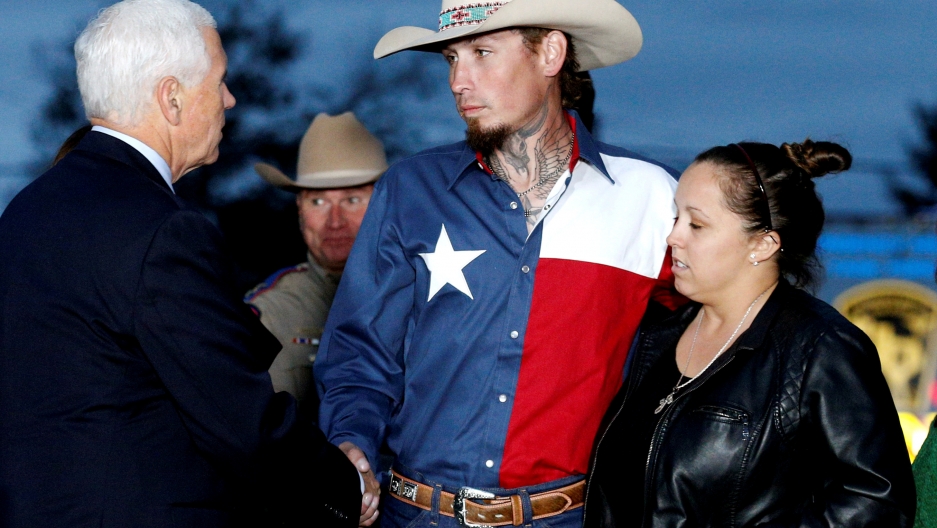 US Vice President Mike Pence shakes hands with Johnnie Langendorff, one of two men who chased the assailant, near the site of the shooting at the First Baptist Church of Sutherland Springs in Sutherland Springs, Texas, Nov. 8, 2017

Every time there's a mass shooting in the US, the same question comes up. Does the availability of guns lead to such tragedies?

Adam Lankford, a criminology professor at the University of Alabama, saw an opportunity to use data to provide an unambiguous answer. His paper, "Public Mass Shooters and Firearms: A Cross-National Study of 171 Countries," has been widely quoted as proof of a link between the frequency of mass shootings and handgun ownership.

The US leads in both categories.

Lankford dipped into databases and news articles that spanned from 1966 through 2012. Significantly, 1966 was the year Charles Whitman climbed the clock tower at the University of Texas in Austin and shot at people below for the next 96 minutes. The attack by the "Texas Tower Sniper" marked the beginning of an era of mass shootings.

In order to make apples-to-apples comparisons between countries, Lankford came up with criteria that narrowly define a mass shooter.

"These were individuals who attacked, in public, using firearms, killing not only someone they had a grudge against, but also random strangers or bystanders," he says. "And I was looking specifically at individuals who killed four or more victims, as kind of a baseline threshold."

He looked at school shootings, workplace shootings, theater shootings, church shootings, mosque shootings and the like. To qualify, killings couldn't be acts of organized terrorism or genocide.

"Violence committed in Rwanda or in Bosnia by a group of people with firearms who are exterminating the population, that kind of thing wouldn't count," he says.

He concluded that, yes, the United States has the most mass shootings, overall and per capita.

"We had 31 percent of these offenders, despite the fact that we only have about 5 percent of the world's population. So, we have well more than our share. And of course, that's very concerning for a variety of reasons."

Lankford says comparing the US with other large countries shows how serious America's gun problem is: "China and India would be two clear examples, and yet they don't have anywhere near the public mass shooter problem that we do."

"This is not a matter of opinion; this is a matter of applying statistical models to data from all these 171 countries."

Lankford compared countries' homicide rates, their gross domestic product, their level of urbanization, the balance of men and women in their population and the frequency of suicide in each country.

Nations with lots of mass shooters did not seem to have much in common until Lankford factored in the availability of guns.

Lankford says he expected the US to come out on top, but another finding did surprise him.

"I was a little surprised that it wasn't attributable to other things, like homicide rate or suicide rate. So, if you look at this on an individual level, these people are committing acts of homicide and they're often committing acts of murder-suicide and they're using firearms. But if you look cross-nationally, there are a lot of countries with more homicides and suicides than we have. And yet, they don't have this problem. It really was the firearms, and I was surprised at the strength of that statistical association."

He says his research underscored the influence of America's embrace of gun ownership.

"You could certainly make the argument, I think a lot of people would, that American gun culture is to some degree holding us back from real reform when it comes to guns. Purely in terms of numbers, we have more than 200 million more guns than the next highest country, which is India. And India has a much greater population than ours, so purely in terms of the number of guns, which is really the product of American gun culture, really, there's no comparison between us and anywhere else."

Lankford notes that other countries, by limiting gun ownership, show a lower incidence of mass shootings. And in at least one case, a country has begun to reduce mass shootings by decreasing the number of guns owned by the public.

"Australia is one example — they had a horrible mass shooting there a number of years ago and they did enact better gun control," he observes. "They engaged in a gun buyback program that reduced the number of firearms in their country by 20 percent and they have seen major dividends in terms of fewer mass shootings in that country."