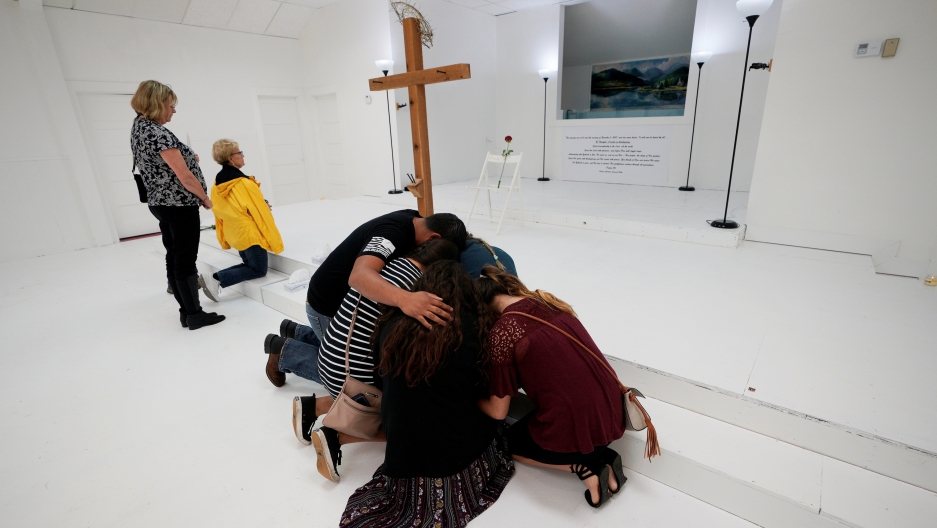 People pray in the First Baptist Church of Sutherland Springs, where 26 people were killed in a shooting attack on Nov. 5, 2017. The church was opened to the public as a memorial to those killed.

Kaleka is a member of the Sikh Temple of Wisconsin in Oak Creek. Back in 2012, a white supremacist went into the temple on a Sunday morning and fatally shot six people, including Kaleka’s father.

When he heard about the deadly attack at the First Baptist Church in Sutherland Springs, Kaleka says he started reliving that horrible day five years ago, once again.

“Those wounds that are there already are sort of ripped open again,” Kaleka says. “The whole day is pretty much gone for you, because now you can’t get your mind off what they’re going through [in Texas].”

Kaleka is a gun owner, which makes sense because he’s also a former police officer. And it squares with his religion too. He says Sikhs are known for being warriors.

“We have a saying in our faith that after you exhaust all other means, it is proper to pick up the sword. And now, people have replaced that sword with a gun.”

But Kaleka says gun violence in America is a public health crisis. And he fears things are going to get worse before they get better.

“My nine-year-old came home a couple of days back and told me about an active shooter drill that they’re doing at their elementary school,” Kaleka says. “Why is that necessary?”

“I just think we have way too many guns [in America],” he says.

These days, it seems like no place is safe.

The deadly attack at the First Baptist Church in Sutherland Springs was the 14th fatal shooting at a house of worship since 2012, according to the Religious Action Center of Reform Judaism, which tracks gun violence.

“It’s only gotten worse as the power of the NRA and the gun industry has grown and is holding Congress hostage,” says director Rabbi Jonah Pesner.

Along with representatives from 50 religious organizations, Pesner signed a letter calling on US lawmakers to take tougher action on gun control.

“Enough is enough with empty thoughts and prayers that are not followed by action,” Pesner says. “As a Jew, I believe that every prayer is a call to action.”

And Pesner is reassured by recent polling data that shows broad support from American voters for what he calls common-sense gun regulations.

“Evangelicals tend to see it differently,” says Joe Carter, editor at The Gospel Coalition, a network of evangelical churches founded in 2005.

Conservative evangelicals are skeptical about the wisdom of passing new gun control regulations, Carter says. “They’re just not being enforced.”

“I mean, if you’re going to shoot up a church, you’re not going to worry about a gun control law,” says Carter, who is also a vet and a gun owner himself.

Gun ownership is not the solution in all cases, Carter says. But a good guy with a gun can prevent somebody who is armed and prepared to do innocents harm, he says.

Carter says many of the mass shootings at US churches or elsewhere are the result of domestic violence, which is something religious leaders need to take more seriously.

“That’s the problem with the gun control issue,” Carter says. “That’s always the go-to thing. And it drowns out other conversations we should be having.”

Mara Nathan has changed the way she thinks about firearms. She grew up in the New York City area, where relatively few people owned guns. Now, as the senior rabbi at Temple Beth El in San Antonio, Texas, Nathan says some members of her congregation are ranchers or hunters. And, she’s pretty sure that some of them come to synagogue and bring their gun.

“I know that there are people who do,” Nathan says. “Whether they left it in their car, or whether it’s in their bag or whether in their cowboy boot.”

Nathan says she respects gun owners and the right to own firearms. But she still thinks that a big part of the solution to gun violence in America is tougher gun controls.

There is no agreement on this issue, Kaleka says. But he thinks people of faith bring an important perspective to the conversation.

“We can do something about this,” he says. “God exists in every person, regardless of race, creed, caste, class.”

“God exists in our compassion, in our forgiveness, in our ability to see the soul in another person, and say, ‘Hey, I need to protect life.’ And that’s where people of faith need to step up.”