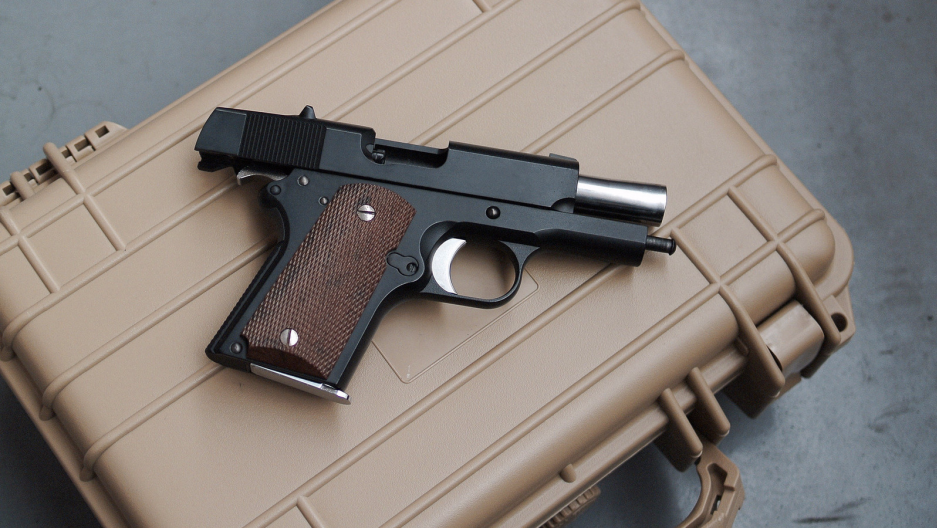 It can be seen in the case of Kevin Jansen Neal, who went on a shooting rampage in California this week. He killed four people and injured several more before he was fatally shot by police. Authorities later found the body of a fifth victim, his wife, at the couple’s home.

Like many other suspects behind recent mass shootings, Neal had a history of domestic abuse and harassment. After being charged with stabbing a woman and placed under a restraining order earlier this year, Neal had been barred from possessing guns. He also had been charged with the illegal possession and firing of a weapon.

So, why did he still have access to a gun?

There are laws preventing convicted domestic abusers from purchasing or possessing firearms, but there are loopholes in the laws and their enforcement. For example, authorities uncovered two homemade semiautomatic weapons and two handguns that were registered to someone else at Neal's home.

When it comes to escalating patterns of violence, domestic abuse “is one of the clearest risk factors that clinicians have identified,” says Alex Yablon, a reporter with The Trace.

According to Yablon, federal law does prohibit certain people from owning or buying guns, including people who have committed misdemeanor domestic violence, have been convicted of a felony that comes with a jail term of a year or more, or anyone who’s subject to a domestic violence restraining order.

“But it’s not as simple as that,” Yablon says. “That’s what the law says, but enforcement is a whole other can of worms. It really comes down to state and local authorities to actually get the guns out of people’s hands. They may not be able to pass a federal background check at a licensed gun dealer, but they may be able to keep hold of guns they owned before they were prohibited, and they may be able to buy from private individuals in a state that doesn’t have universal background checks.”

Despite the persistent gun violence here in the United States, there appears to be no reliable system in place for confiscating a domestic abuser’s weapons.

“To a frustrating degree, it can operate on the honor system,” says Yablon. “I was speaking to a lawyer in California who works for a battered women’s shelter and he files a lot of restraining orders. He says the judge will say at the end of the proceeding, ‘Do you have guns? You can't own any guns,’ and the defendant will say, ‘No I don't have any guns,’ and that's the end of that.”

According to Yablon, only a handful of localities across America actually have law enforcement officials go to a convicted domestic abuser’s home to search for or confiscate firearms.

“There’s a big opportunity to actually get guns out of the hands of people who we already agree shouldn’t have them,” he says. “The issue is really one of resources — it’s costly to send police to execute these search warrants, and it can be dangerous. Police are more likely to be injured or killed on domestic violence-related calls than any other kind of call.”

A general lack of awareness may also be allowing domestic abusers to hold onto their weapons.

“I believe in this case in California, the local sheriff who was responsible for enforcing the restraining orders against the suspect, Mr. Neal, wasn’t initially aware that he was prohibited from owning guns,” says Yablon. “Only later when someone actually checked the court documents did someone come back and tell the sheriff that actually this guy should never have had any guns.”

While a convicted domestic abuser may not be able to buy guns from a licensed firearms dealer, in 32 states across the country, private individuals can sell weapons without having to conduct a background check. Additionally, background checks are not foolproof.

“There are issues with paperwork — not every court system is going to make it clear in the same way that someone has committed a crime of domestic violence,” says Yablon. “They may have a charge for assault, and if you were to read the charging documents it might be clear that it was a domestic assault, but if you were a background check examiner you’d have to do extra work to see it was a domestic violence case, that this person shouldn’t be able to buy a gun.”