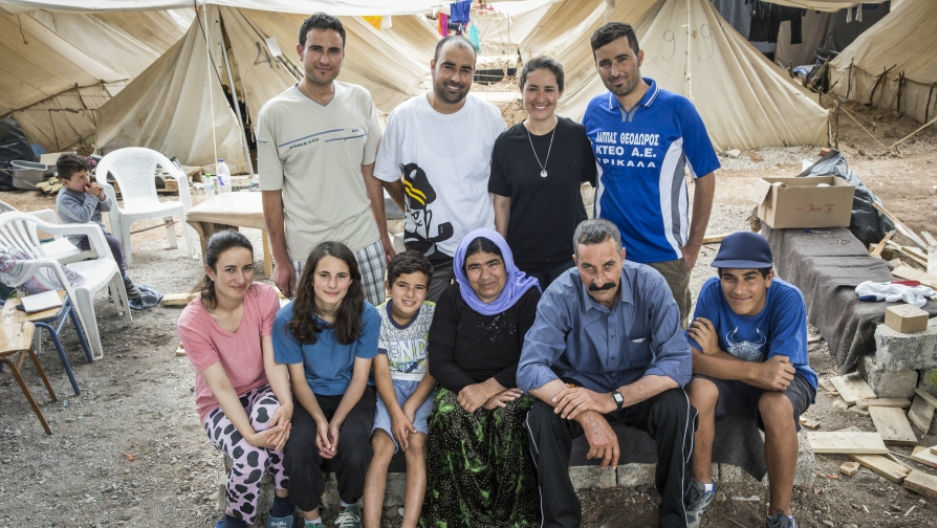 Members of the Noh family in Ritsona refugee camp in Greece in May 2016.

Last year when I was walking around Ritsona refugee camp in Greece I heard wisps of music floating up from the dense sea of military tents. As I followed the sound I met a young woman with intense green eyes who invited me to sit with her.

Suham Noh was 23, and before she fled the conflict in her native Iraq, she had been studying Shakespeare at a university in Dohuk. The music came from one of her brothers strumming a long-necked saz as he sang a mournful tune in Kurdish.

The Nohs were a Yazidi family of 11 siblings from the Sinjar region of Iraq. ISIS invaded the area in 2014 and slaughtered over 3,000 Yazidis. More than 6,000 Yazidi women and girls were abducted and used as sex slaves. The Nohs’ village had been spared direct attack but it was no longer safe for Yazidis, a religious minority group long persecuted by Arab Muslims, to remain. 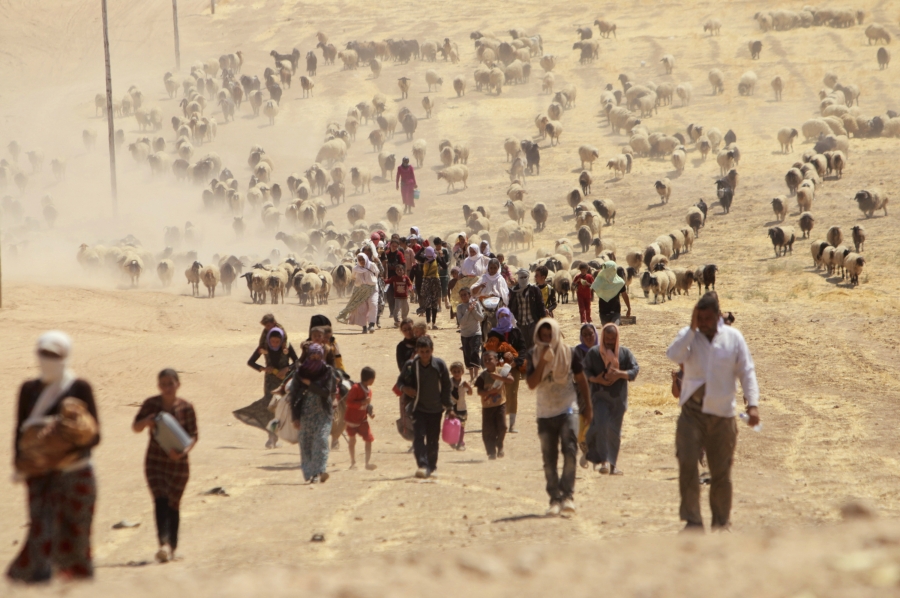 At first, the family tried to enter Greece by land from Turkey thinking it would be safer than going by sea. But crossing the mountains in winter by foot as refugees was harder than they imagined. After facing freezing temperatures and being turned back five times by security forces, they decided to try their luck in the Mediterranean. After two failed attempts, they finally made it to the Greek island of Lesbos in a rubber dinghy.

By this time it was spring of 2016 and their path northward to Germany was blocked by border closures in the Balkans, so they found themselves living in Ritsona camp, about 50 miles north of Athens. To try to keep their spirits up, the family kept busy: They poured their energies into painting murals, playing music, building furniture out of scraps, reading and studying and helping out the various NGOs at the camp. Suham’s brother Salem even traveled five hours to volunteer at a remote camp especially for Yazidis.

Related: For Yazidis in Greece, safety and security are still out of reach

The family was together in Ritsona, except for one married brother who had gone ahead to Germany with his wife from Iraq. After surviving a genocide and fleeing their home, family unity was the most important thing for them. For Suham’s mother, being separated from even one child was unbearable. Suham and her siblings tried to comfort her, promising that one day they would be all together again. “But now, I don’t think so,” Suham told me, holding back tears. 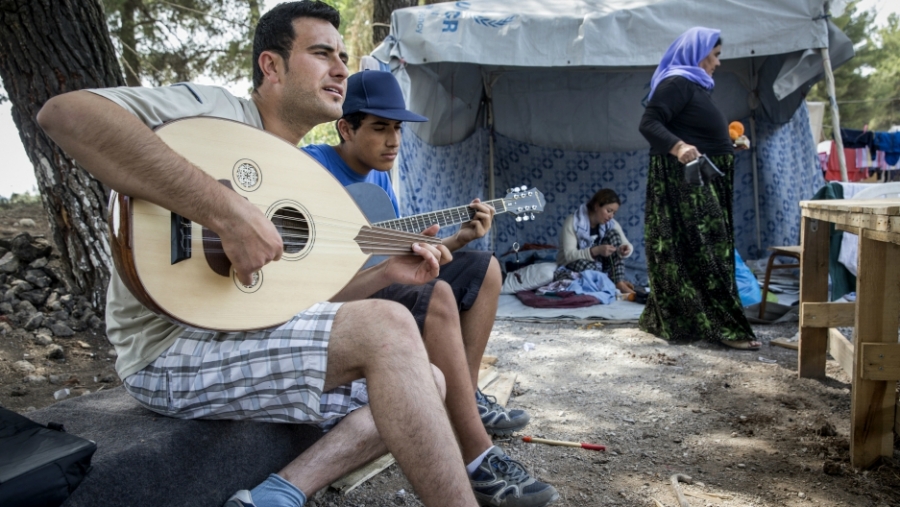 The Noh family in Ritsona camp.

A year later I met the Noh family again, this time in France. They’d been granted asylum and relocated to the port town of Saint-Nazaire in Brittany, where they were living on a temporary government stipend.

I sat with Salem on a wooded trail on a rocky stretch of coastline overlooking the Atlantic Ocean a few blocks away from their apartment.

“It’s beautiful down here,” he said. “It’s quiet, just the sound of the waves.”

We walked up the hill through a peaceful working-class neighborhood to the public housing project where they lived. Suham was at their apartment cooking a chicken and tomato dish that she described as “a little French and a little Iraqi.”

But most French food, she told me, wasn’t to her liking — including some French specialties. “I don’t drink wine and I don’t like cheese and I am living in France,” she said with a laugh.

Sitting around a simple wooden table in the dining room with a pleasant view of the wooded neighborhood, we talked about how they were settling in. Salem told me that “the most important thing is safety and we have that.”

But they were still reeling from all the change in their lives. Everything was new and different — language, culture, food.

“We’ve been separated from our friends, from everything,” Salem said. “We are starting from zero.”

Saint-Nazaire is a shipbuilding town known for constructing some of the world’s largest cruise ships. Most activity centers around the port — but the city streets are quiet.

Compared to the hustle and bustle of Iraq, Salem found the languid pace of French seaside life excruciating.

“We don’t see anyone,” Salem said, laughing. “In Iraq, there were always people around us. Their life for us is very slow. I don’t see movement!” 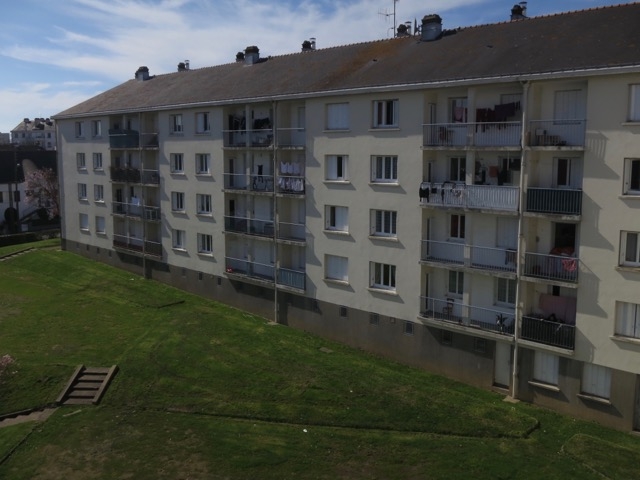 After France accepted the Noh family for relocation they moved into public housing complex in Saint-Nazaire.

Slow as life was in Saint-Nazaire, it did have a wild side. Another Noh brother, Suhar, 19, had just started attending the Lycée Experimental, an alternative high school known across France for its nontraditional approaches to learning. Students there design their own classes and curriculum in partnership with teacher-advisers. Their attire is also free-form, with lots of tattoos and colored hair, and they shop for and cook their own meals.

When I arrived with Suhar, a student with lots of piercings handed me a blob of sweet dough to sample. “Is this a French kind of cookie?” I asked. “No, we created it. It’s experimental,” she said.

I tried to imagine what a Yazidi kid fleeing genocide would think about this non-conforming place.

“I’ve never seen anything like it,” Suhar said, smiling. But he, like the rest of his family, is open-minded and adaptable — so he rolls with it.

“Everything in life doesn’t come in a moment,” he said, sounding wise beyond his years. “It’s different from culture to culture. A 19-year-old boy here doesn’t have the experience I have.”

Suhar led me down a dark staircase into a series of poorly lit, slightly dank rooms used as music studios. As my eyes adjusted, I saw that we were surrounded by odd-looking stringed and percussion instruments. A teacher explained that the students created the instruments themselves. They were, of course, experimental.

Suhar loved all the creativity. But his main goal was quite specific — to learn French, which he knew would require focus. One reason he wanted to learn the language was so he could convey to his new French friends what his family and the Yazidi people had been through.

“I want to tell them what happened to my people — a lot of genocides,” he said, referring to the history of Yazidi persecution that long predated the arrival of ISIS in 2014. “I want to show them that there is a lot of pain in my county.” 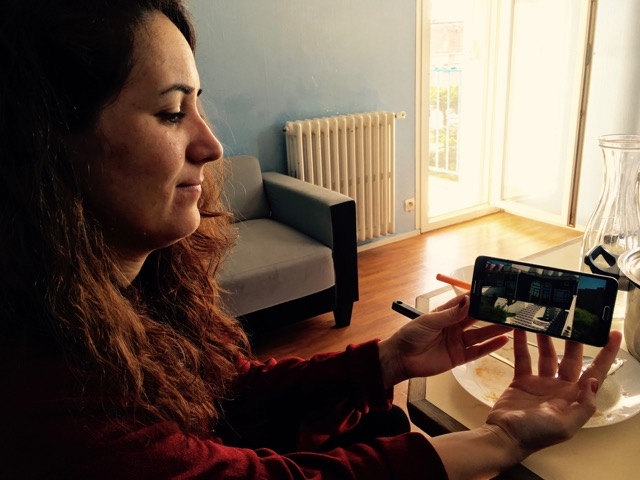 Inside the Nohs' apartment in Saint-Nazaire, Suham Noh shows a photo of the family home they had to flee in the Sinjar region of Iraq.

Back at the Nohs’ apartment, I sat with Salem and Suham around their dining room table. Salem opened his phone and played a clip from a video he was making about his family’s long journey out of Iraq.

The clip included a photo of the Nohs’ house back in their village outside of Dohuk. The family designed and built the house together, they explained with enthusiasm.

“We didn’t even need an architect,” Salem gushed. “My brother and father designed it.”

They showed me photos from the last time they saw the house — the night they had to flee. In one picture, a pile of daypacks sat in a beautifully tiled hallway.

“It was 4 a.m. when we had to leave the house,” Suham explained.

“We each had everything in one small bag.”

They loved their home in Iraq deeply. But as Yazidis, their home was also a dangerous place. They had no choice but to escape. But still, I wondered if they had regrets.

“I try to remember the good memories,” Salem said, but because of the attacks, “I cannot miss my country.”

For the Noh family, and perhaps for many other refugees as well, “home” is just as much about people as place.  Salem reminded me of the words he had scrawled on his tent in the refugee camp back in Greece: “Home is where your mom is.”

Having all the family together again was still a work in progress — until then, their life in France felt disjointed. Most of the family was in Saint-Nazaire — but two brothers had to stay behind in Greece and one was still in Germany.

In spite of how provisional their life seemed in France, Suham already felt a deep allegiance to her new country.

“They gave me a house, they gave me a safe place, which my country could not do for me,” she said. “If I live in a country it will be my country and I will be ready to defend my country like a French person.” 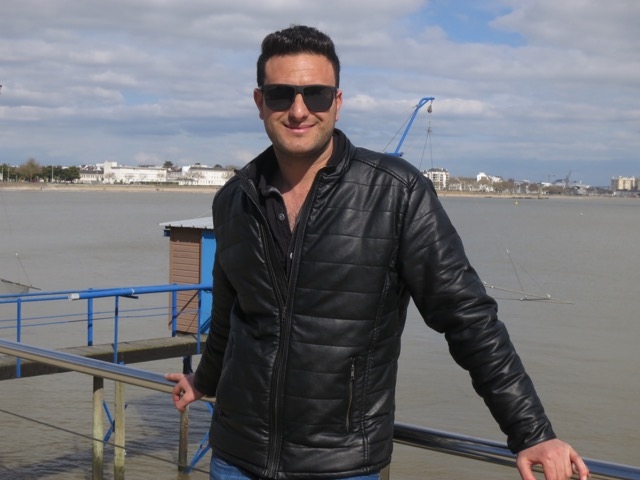 Salem Noh stands by the sea in Saint-Nazaire.

Before I left Saint-Nazaire, Salem and I went to the sea again. As we listened to the sound of the waves, I drifted into a reverie.

“For me, the ocean is always a place to contemplate, you know?” I said. Salem agreed with me.

But after a moment he added something that reminded me how different the experience of that place was for him — and how the new home he and his family were beginning to create here in France would always be tinged with memories of why they had to leave and what they went through to get here.

“The sounds also remind me of when we were waiting for our boat to get to Greece,” Salem said. “Same sounds, but it was really scary.”

This is the third story in her series "Finding Home" that follows refugees from camps in Greece as they try to settle in Germany and France. In Part 1, Jeanne met with the Daas family — Syrians who fled Palmyra when ISIS overtook the city in 2015 and were trying to adjust to life in Traunreut, Germany. In Part 2, she reported on the challenges Traunreut was facing integrating the newcomers. In the next story, she'll focus on Saint-Nazaire's approach to accepting refugees like the Noh family. Since Jeanne visited the Nohs in Saint-Nazaire they have moved to eastern France near the German border, where they are closer to the large Yazidi community in exile in Germany, as well as their brother who lives there.