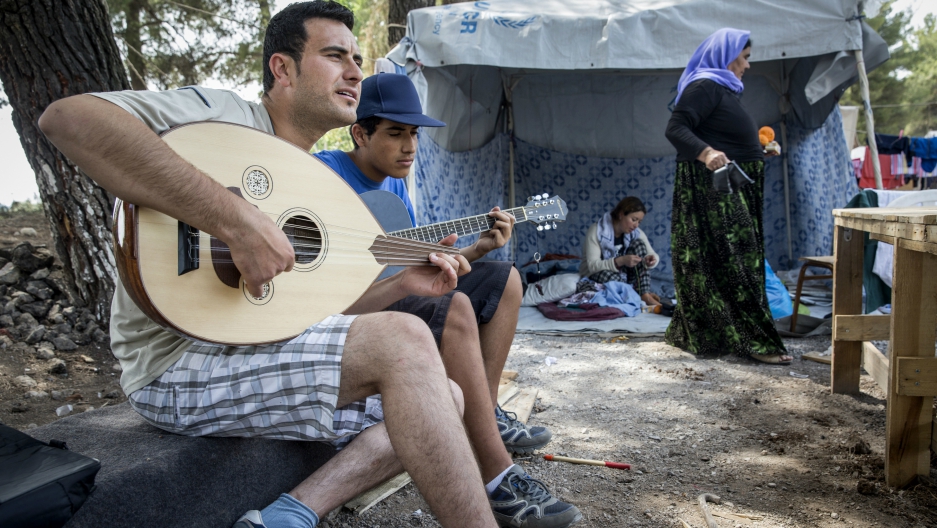 Salim Noah plays guitar with family members at Ritsona Camp, north of Athens. They are Yazidis from Dohuk, Iraq.

On the long drive to Petra camp near Mount Olympus in northern Greece, Salim Noah is voice-chatting on WhatsApp continuously.

He sounds agitated and I ask him to translate from the Kurdish: “One hundred and thirty Yazidis arrived to Petra just last night from Cherso camp. Muslims were attacking them.”

Petra is the only refugee camp in Greece exclusively for Yazidis, a religious minority in Iraq who have suffered brutal treatment at the hands of ISIS. After the borders closed in March, about 3,500 Yazidis were trapped in Greece. Petra was created around that time to house about 800 Yazidis who were being harassed by some Muslim refugees in Idomeni, on the Greece-Macedonia border.

But because of ongoing situations like the one at Cherso, its numbers have swelled to almost double that amount.

Noah is also a Yazidi refugee. He is staying with his family at Ritsona camp outside of Athens. But he knows Petra well because he volunteered there in March, when the camp was first getting setup. He’s offered to make the long trip with me to Petra and show me around.

More WhatsApp messages come in. He chats with Julia, who volunteers with the New York-based Liberation of Christian and Yazidi Children of Iraq, one of the groups that fund Petra. Meanwhile, Emma, the volunteer at Petra who told Noah about the new arrivals, continues to update him. The United Nations High Commissioner for Refugees moved the refugees from Cherso in four buses at 1 a.m. She and other volunteers and refugees had food waiting for them when they arrived and were up late helping them settle in.

About six weeks ago, I met some Yazidi children from Cherso and observed some tension between them and a group of Arab Muslim kids. I wondered if I would meet any of theose same Yazidi children again at Petra.

Children play in the grass near a row of military camps on the grounds of Petra Camp in Greece.

Noah is eager to see friends, especially Ezidhar, a 12-year-old girl who he met in March. “I love her,” he says. “I hope you will get to meet her.”

We leave the main highway and head inland along winding roads toward Olympus until we arrive at the camp. A sea of white military tents are pitched in a field among scattered buildings surrounded by areas of forest. The site used to be a psychiatric facility, but with the tents and children running around everywhere it looks a bit like a summer camp — at least at first glance.

We check in with the Greek military officers at the entrance and then join Emma Ezidi in a large room that doubles as a bedroom for several volunteers and a sort of office. Ezidi is an Armenian Yazidi who lives in Germany and has been volunteering to help Yazidi refugees in Greece for months.

Ezidi updates me on recent incidents in various camps where Yazidis have been harassed by Muslims.

Besides the refugees from Cherso, they are very worried about a group of 200 Yazidis in Katsika camp. “I talked with an old man. He was crying and begging for help.” Ezidi says the man told her the harassment was so bad that the Yazidis where afraid to go to the area where they could charge their phones. It was also dangerous for them to go to the bathroom. Several Yazidis at both camps were punched or attacked at knife point. 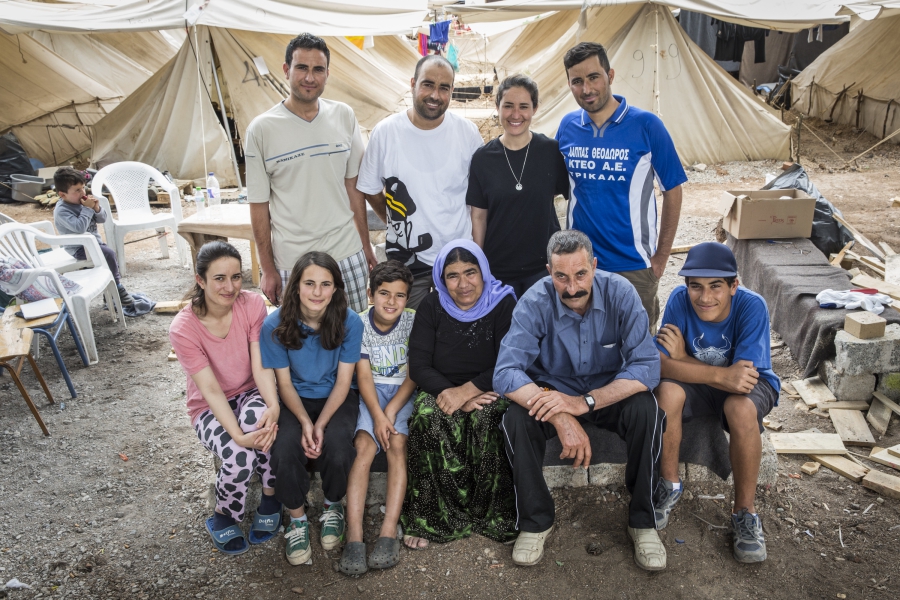 The Noah family are Yazidis from Dohuk, Iraq, now living at Ritsona Camp north of Athens.

The Yazidis at Katsika eventually left the camp on their own with no clear destination.  More recently, another group of Yazidis left Nea Kavala camp because they felt unsafe. Yazidis have been attacked in the detention center on Leros island, as well.

It’s difficult to get comprehensive data on violence against Yazidis in Greece. “We are aware of what Yazidis have been through and that they are subject to harsh forms of persecution,” a UNHCR spokesperson told me. “If and when we are approached, we try to be of help.” But UNHCR doesn’t keep stats on refugees by religious group and the group doesn’t monitor Yazidis specifically. I was able to confirm the incidents at Cherso, Katsika and Nea Kavala with the UNHCR — but it’s generally the network of Yazidi refugees and activists inside and outside of Greece who have the most up-to-date information.

“We get calls daily from Yazidis at other camps asking for help,” Ezidi says.

Sheik Nury, a Yazidi elder, joins the conversation and after thanking all the people who help their community — including CYCI and other NGOs, the Greek government and Greek people — pleads for Europe to help the Yazidis in Greece get to safety in Germany as soon as possible. Germany is now home to the largest Yazidi community outside of Iraq and every refugee I spoke with at Petra told me they wanted to unite with family and friends there.

The attacks against them in Greece are only the latest in a long series of ordeals this community has suffered, Sheik Nury explains.The refugees at Petra have already been displaced from their homes for two years, since 2014, when ISIS attacked Sinjar, killing thousands and enslaving women and girls.

Some Yazidis will certainly qualify for family reunification with close relatives already in Germany. But others will have to apply for the EU’s relocation program, which doesn’t allow refugees to pick their destination country. “The relocation is a disaster for Yazidis,” Sheik Nury says. It will parse the already dwindling population into separate countries. He fears “there will be no more Yazidis.”

Around 8 p.m., Salim takes me for a walk around the camp. Almost immediately a bright-eyed girl runs up and throws herself around Salim. It’s Ezdihar.

“She’s so smart,” Salim gushes, hugging her back. “She was always the top student in Iraq, the best one. ... She already speaks some English, some German. We stay in touch on WhatsApp with her mother’s phone.” 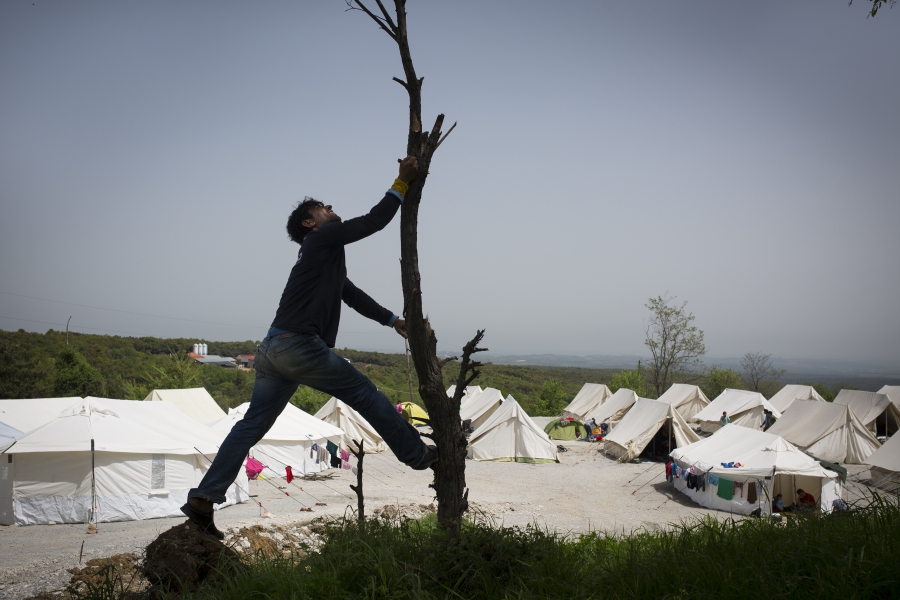 A man harvests firewood at Petra Camp for Yazidi people in Greece.

Conditions at Petra are extremely rough. People feel safer there than in other camps because they are with other Yazidis, but the canvas tents are too hot in the summer and will be too cold in winter. Snakes and scorpions are a constant threat. Ezdihar tells us that the week before, her family dealt with four scorpions, two outside and two inside the tent. Bathroom and shower facilities are inadequate for a population this size.

Living so packed together under marginal hygienic conditions, there are a lot of “contagious illnesses that become infected very easily,” said Dr. Margo Gramall, a pediatrician from Wisconsin who volunteers at the camp. She mentions gastrointestinal problems, scarlet fever, pneumonias, viruses, lice and a lot of scabies.

But on this evening, a lot of people are outside and the atmosphere seems almost cheery. A group of men are playing volleyball — a popular sport among Yazidis. Kids are running around playing and several women are cooking a Yazidi dish of fried dough stuffed with tomato or meat. People sit around in groups, talking and eating.

When I ask Ezdihar how she likes living at Petra she smiles and says “Good, good. Here is better than the border in Idomeni. Here we are all Yazidis.”

Emma Ezidi tells me that as difficult as the conditions are at Petra, people are relieved because they at least feel safe. “They feel happy, because their girls can get out and play at any time of night. They can do whatever they want.”

But the camp is home to an incredible amount of trauma. Salim tells me stories as we pass different tents. “Here is a person who lost 28 people from his family,” Salim says. “Bothers, sisters, parents, kids, uncles ... they were all killed.” By another tent he whispers, “a woman lives here whose husband was killed by ISIS.”

When we go back to the office to say goodbye I see two girls who look familiar. Then I remember — they are two of the girls I met at Cherso back in May. 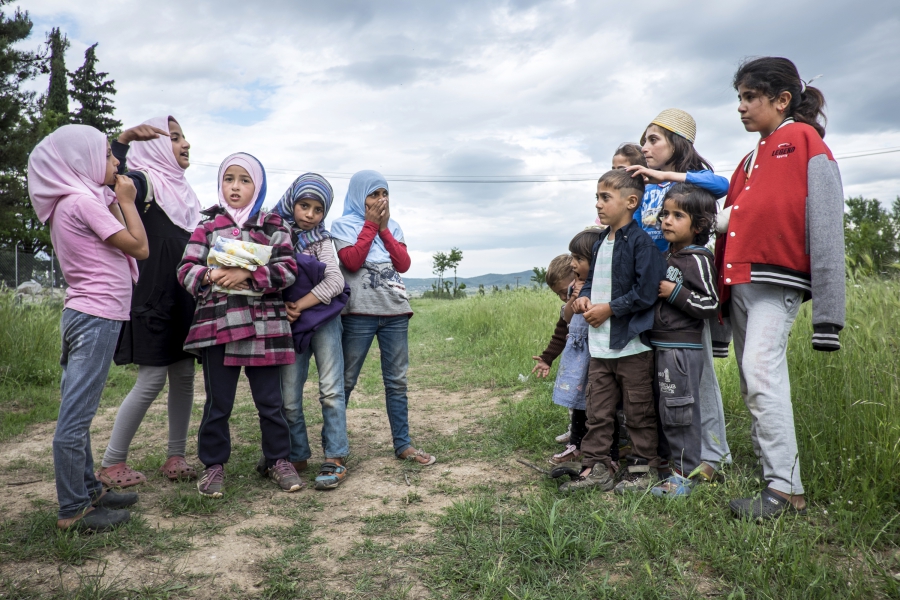 Outside Cherso Camp in northern Greece, Muslim girls from Deir ez-Zor, Syria, taunt a group of Yazidi children from Iraq, calling them "kafir," which means infidel. The Yazidis are an ethno-religious minority whose villages and towns were invaded by ISIS fighter in August 2014, resulting in the deaths of approximately 5,000 Yazidis.

The day I was there with photographer Jodi Hilton, we were both captivated by a cute gaggle of Yazidi kids who followed us around for a while and playfully counted to 100 for us in both Kurdish and Greek. Then we watched as another adorable group of kids approached, not Yazidis, but Arabs. They were very friendly with us but stared menacingly at the Yazidi kids and at one point yelled out “kafir,” a slur that means unbeliever. The kids circled around each other and never mixed. We were both a little shocked to feel this hateful tension between these two groups of young children.

Now I know that what we observed that day was part of a larger problem at the camp — tensions between Muslim and Yazidis that became so unsafe for the Yazidis that they had to leave.

Salim translates as the girls rattle off stories of what happened to them back at Cherso. Once, volunteers were trying to give them some food and some Muslims took it from them. Another girl broke her hand when a Muslim refugee flipped her out of a hammock.

How did you feel when you came here to Petra last night, I asked. “I feel like I am born again,” one girls says. “Now I can breathe.”

But for Emma Ezidy, anxiety runs high. “We are trying our best to protect Yazidis from violence in Greece, but the real goal is to transfer them to a country where they will be safe,” she says. “All our friends, our family members, are in Germany.  We are waiting to be together to live a normal life. “