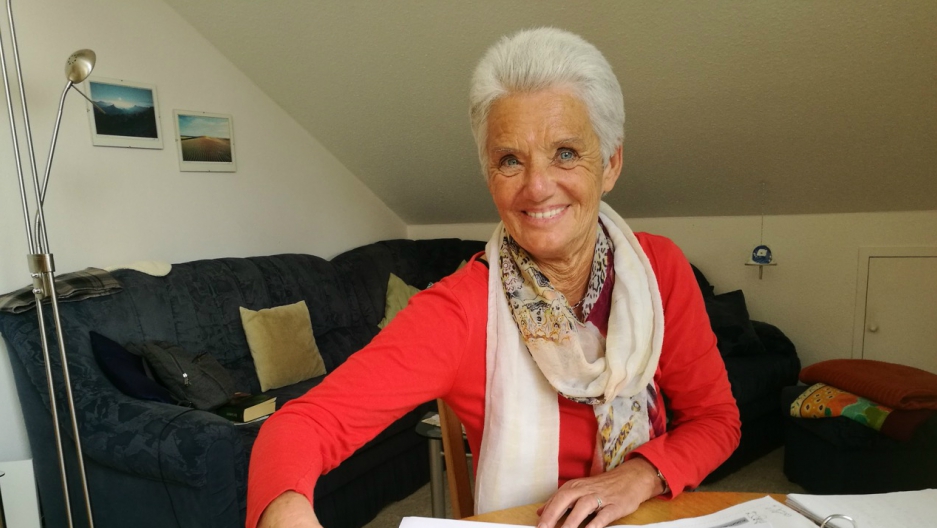 Christa Schmidt is pictured at the table in her apartment in Traunreut, where she tutors refugees in German. Schmidt’s parents were German refugees from Romania.

I met Christa Schmidt over dinner with the Daas family, refugees from Palmyra, Syria, who are now living in Traunreut, Germany.

The Daases have been in Traunreut for almost six months, but the 76-year-old German tutor is the only German person in town whom they feel a personal connection with. With short-cropped gray hair, bright blue eyes and a slim build, Schmidt twinkles with the energy of a much younger woman.

Since 2015, when refugees started arriving in large numbers to Bavaria, Schmidt has been volunteering to help. The government provides housing and a little financial support when refugees first arrive but it relies on volunteers like Schmidt to help them learn German and begin to navigate daily life.

I came to Traunreut to find out how the Daas family was adjusting to life in Germany. But I also wanted to see the refugee experience in Traunreut through the eyes of the locals who have taken in hundreds of newcomers since 2014 as part of Germany’s efforts to absorb over 1 million migrants.

Germany uses a proportional quota system to distribute refugees to every state and county in the country. Bavaria, the largest state, is responsible for 15 percent of the total. Traunreut is in Traunstein county. With a population of 21,000, Traunreut has taken in 600 refugees, the most of any city in the county.

If the Daas family is cautiously optimistic that everything is going to work out for them eventually in Bavaria, I didn’t get the same impression from Traunreut residents.

Today, Schmidt is driving a 20-something Syrian refugee named Ali to the county capital of Traunstein to help with some paperwork he needs to be able to start looking for a house of his own. The housing situation for refugees is “desperate,” Schmidt tells me. Even Germans have a hard time finding a place in Bavaria — for refugees it’s almost impossible.

As Schmidt and Ali hunt for the office they need, I learn more about the refugee housing crisis in Bavaria from government spokesman Roman Schneider. First, he tells me how proud the government is about having placed 1,785 refugees in temporary housing around the county. Peering into a spreadsheet on his computer, he tells me they are living in 120 facilities across 35 towns and villages.

“Even in the real challenging years — 2014 and 2015 — we never had to put refugees into gyms or into bad facilities,” Schneider says.

The real trouble begins after refugees have been accepted for asylum. At that point, they are supposed to leave refugee housing and use their housing stipend to find their own place on the open market. But with a vacancy rate of only 2 percent, Bavaria has one of the hottest real estate markets in the country. Landlords can charge rents far out of reach of what refugees can afford.

“So refugees don’t get houses here, or they only get them with difficulty,” Schneider says. “We’re pushing investors to build houses, and the government is considering building low-income housing, as well. But it’s a very complicated situation.”

But being able to afford the rent isn’t the only challenge.

“I think most people would say something like, ‘All right, they’re here now, what can we do? Let's the make the best out of it.'”

Earlier, at the refugee housing complex where the Daas family is living, I met Heidi Plank — a Bavarian native and volunteer who goes with refugees on their apartment searches.

“There is a lot of envy,” she says. “People are saying the refugees are getting all the apartments, and our poor people from the social sector are not.”

So even if refugees can pay, Plank says that landlords are increasingly hesitant to rent to them. Some have been influenced by the media and are afraid.

“The people in the countryside watch TV and see what happens in Paris and Cologne and other big cities,” Plank says. “And they might say, 'Well, we don't like those people.'”

Oliver Koglot is one of the people raising alarms. Koglot helped organize two anti-immigrant rallies in Traunreut last year with support from the far-right Alternative for Germany party.

I meet Koglot outside the Traunreut City Hall where both rallies took place. He says German Chancellor Angela Merkel’s open-door policy has allowed in too many Muslims into Germany, and he doesn’t believe they will integrate.

“For me, the solution is to end the wars,” Koglot says, “and give people a chance to go home to rebuild their countries instead of trying to integrate them here, which won’t work for the vast majority.”

Ironically, Koglot is a migrant himself.

In fact, 90 percent of Traunreut’s residents are ethnic German refugees or migrants who came from Eastern Europe in several waves beginning in World War II. Koglot came from Romania in 1981 when he was 6. I wonder aloud if that makes him more empathetic to the situation of the refugees coming in now. 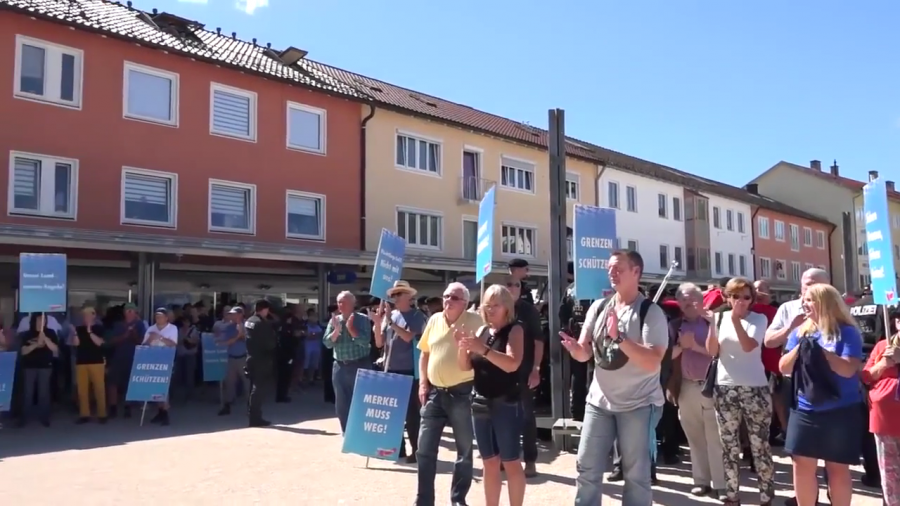 Koglot feels resentment toward today’s refugees, in part because he feels they get into the country too easily, especially compared to the lengthy process his parents had to go through to immigrate.

“To come from Romania to Germany, where really my parents signed the papers, they had to pay 5,000 marks,” he says. “They had to wait eight years before they signed. They were only allowed to bring one box with them. It was really complicated. Not just: Go through, and that’s it,” like today’s refugees.

Koglot already spoke German when he arrived from Romania. Even so, he wasn’t Bavarian and felt very much like an outsider.

The key to integration for Koglot and the other German immigrants was learning good German, then finding a job.

“The typical process of integrating was by speaking German and working,” he says.

Christa Schmidt, the German tutor who is so warm with the refugees, also has a migrant past. Her family came to Traunreut in a horse-drawn wagon after World War II when Stalin expelled Germans from Romania.

“My mother told me a lot of stories,” she says. “At the end of the war, they had to come here walking beside a wagon with only one horse. It was a very hard time.”

But unlike Koglot, Schmidt’s family’s experiences make her more empathetic with today’s refugees. 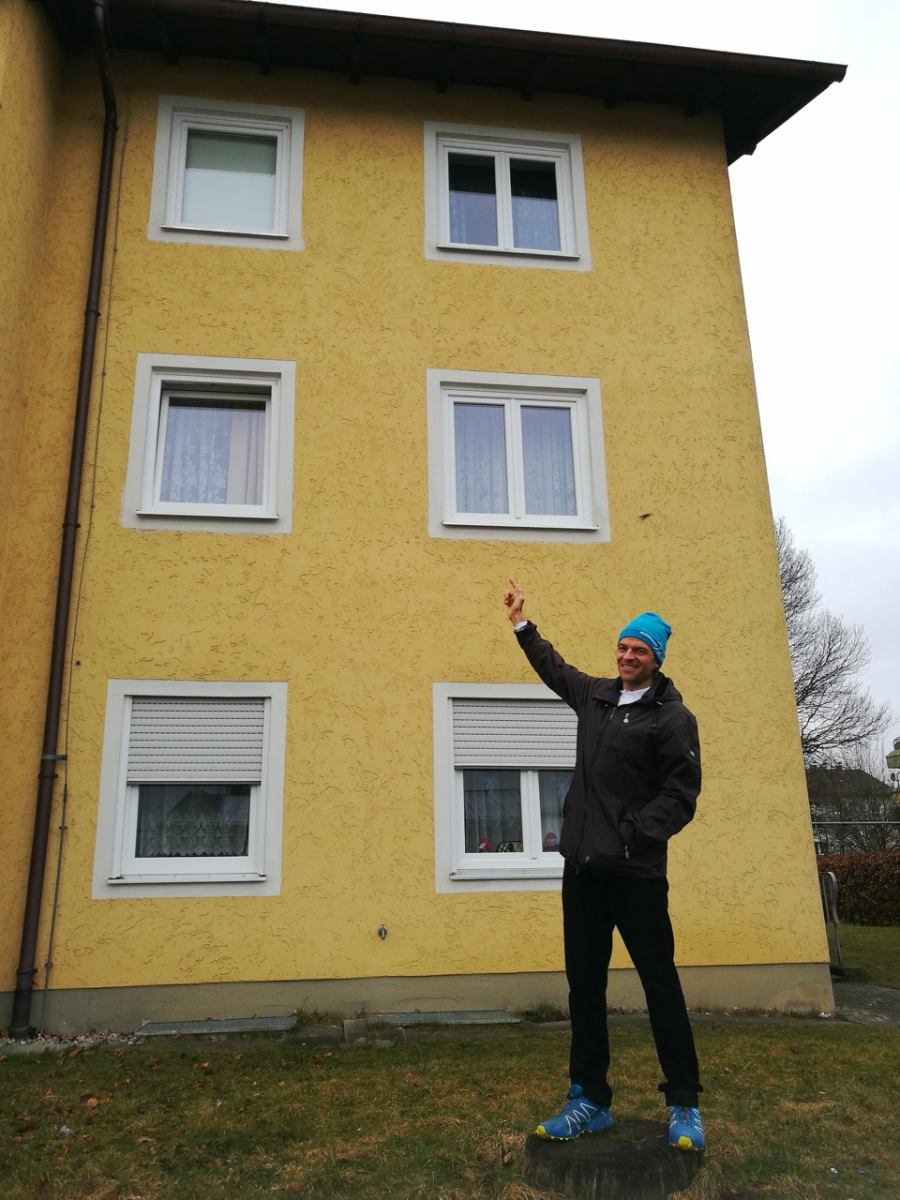 Oliver Koglot stands in front of his childhood home in Traunreut. Koglot helped organize two anti-immigrant rallies in the city with help from the far-right Alternative for Germany party. He arrived in Traunreut in the '80s with his family as German immigrants from Romania.

Schmidt likes working with refugees but she is concerned about their future. Her students have little experience studying language and she doesn’t expect most will ever learn German well, which means they won’t be able to get into the workforce. Plus, the housing challenge seems almost insurmountable in the long term.

But I’m still surprised at how few refugees she predicts will succeed. “If there are 5 or 6 percent that integrate,” Schmidt says, “I think we are lucky.”

When I asked the same question to Roman Schneider, the upbeat government spokesperson who is proud of the county’s response to the refugee crisis, he also had a dim view, but not quite as dim as Schmidt’s. He estimated 10 to 15 percent of refugees would successfully integrate.

So that’s the underlying tension I sense in Traunreut and Bavaria: In spite of some anti-immigrant sentiment in the local population, there is also a lot of goodwill. Citizens like Schmidt are volunteering, and the government has a can-do attitude. But even those same players who say, “We’re helping, we’re helping,” doubt integration can actually work for very many.

Maybe the district spokesman sums up the ambivalence best.

“I think most people would say something like, ‘All right, they’re here now, what can we do?'” Schneider says. “'Let's the make the best out of it.'”

In Part 1 of “Finding Home,” Jeanne met with the Daas family — Syrians who fled Palmyra when ISIS overtook the city in 2015 and are now trying to adjust to life in Traunreut. Next, Jeanne goes to France to meet Yazidi refugees from Iraq who are starting new lives in the seaside city of Saint Nazaire in Brittany.