When I met Ali Daas and his family in May of last year in a refugee camp in Greece, they had been without a home since early 2015. After ISIS invaded their hometown of Palmyra, Syria, they escaped to Turkey, then came in a boat to Greece. Since then they’d lived in a series of temporary apartments and several refugee camps.

Once when Ali and I were both in Athens, we met at the Benaki Museum to see an exhibit about Palmyra’s beautiful Greco-Roman ruins where he used to walk as a boy. As we looked at photos of the Temple of Bel and other ancient architectural marvels that ISIS has destroyed, I got a sense of how being a refugee had cut him off from his deepest roots.

“We had to leave a lot of things behind,” he said, “memory, story, history.” 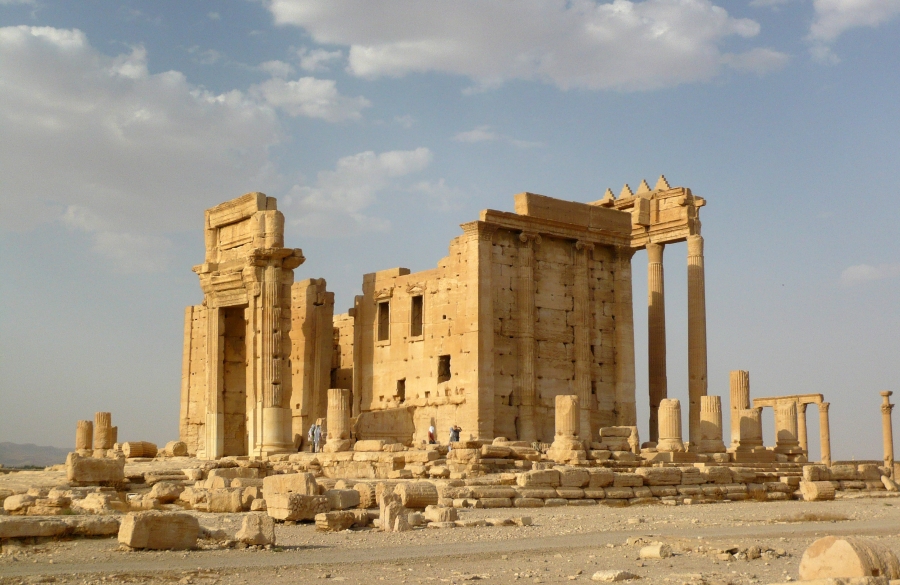 The Daas family fled the Syrian city of Palmyra, site of the Temple of Bel (shown here in 2010) and other historic ruins, after ISIS invaded in 2015.

A year later I went to see Ali, his mother and three sisters at the latest stop on their refugee journey: Traunreut, Germany. After being stuck in camps in Greece for six months, in the fall of 2016 they had all finally managed to make their way north to seek asylum.

Upon arrival in Germany, Ali’s mother and sisters stayed in a reception center in Munich for a few weeks until the German government sent them to live in Traunreut, a small Bavarian city not far across the border from Salzburg, Austria. Ali came later and was sent to Bamberg, another Bavarian city about five hours away.

I wanted to see if after everything they’d been through they were starting to feel at home again. Or maybe that feeling of rootedness, of being at home, was not even possible for war refugees.

'They are just afraid of us'

The Daas sisters greeted me in the refugee housing complex in Traunreut with warm hugs and a platter of steaming hot Syrian bread.

They seemed in good spirits but I immediately sensed that they were a little out of sorts living in small-town Traunreut. More cosmopolitan Munich, with its big city pleasures and universities, had been much more to their liking, Wesam Daas, the oldest sister, told me me. Plus there were a lot of Syrians.

“There’s one street in Munich where you feel that you are in Syria,” Wesam said enthusiastically. “All the people speak Arabic.”

Related: Trapped in Greece, these refugees wait, just before another frontier

In contrast, Traunreut is a small, insular city with only a few cafes and shops and minimal street life. There’s no Arab grocery in town, so Ali’s mother bakes the Syrian bread herself.

Venus and Wesam Daas, right, at Idomeni refugee camp on the Greece-Macedonia border in May 2016.

Germany doesn’t want to settle all new refugees in urban areas — so newcomers like the Daas family are assigned to locations all over the country.

The refugee housing in Traunreut is a dorm-like building the city built for migrants on the edge of town near some office buildings and a mall. It’s bare bones but clean, with small rooms off a long hallway, shared bathrooms and a kitchen on one end. We sat on the floor over sweets and coffee in one of their two rooms and began to catch up.

“You can’t do anything if you don’t have a home. Life without home, I can say it’s like a cloud without rain.”

Compared to the Syria they left behind before the war, where the family entertained constantly and the streets were full late into the night, Wesam told me, little Traunreut was a dead zone.

“Do you go out at night?” I wondered. “Anything to do here?”

“There is nothing in this city,” she said with a laugh.

The people in Traunreut are “a little cold,” she said. “They sit in restaurants. They drink coffee together. But they don't speak.”

“In Syria you hear the laughing from the end of the street!” she said with a big smile. “That is the difference.”

When the family does go out to shop or do errands, the locals are often rude. “Every time we try to be good they surprise us with bad things,” Wesam said.

She sometimes gets the impression that the residents don’t like them very much. “If we want to take the bus, they don't stop,” she said. “If you go to buy something and say, 'danke schön' or ‘tschüss,’ they don't answer.”

When she told me about this hurtful treatment she laughed a bit, like it was all just a silly mistake. I wondered to myself if keeping a sense of humor was a kind of survival skill to deal with the pain.

But I realized her light attitude was also because she was able to sympathize with the locals’ discomfort at having foreigners in their midst.

“They are just afraid of us,” Wesam said. “And I can understand if somebody from far away came to my country — it would be strange at the beginning. But after it will be OK.”

It was Carnival season when Ali finally arrived from Bamberg to visit for a few days, so I asked if he and Wesam wanted to check out the party in the nearby village of Altenmarkt.

At 11 a.m., music was blaring from multiple stages and people were dancing around in costumes drinking. I asked a tall man dressed up as a bumble bee with a frizzy yellow wig what he had in his cup. He told me it was Glühwein, and that he would soon follow up with beer, schnapps and then grappa. “It’s a step-by-step process,” he said with a grin. 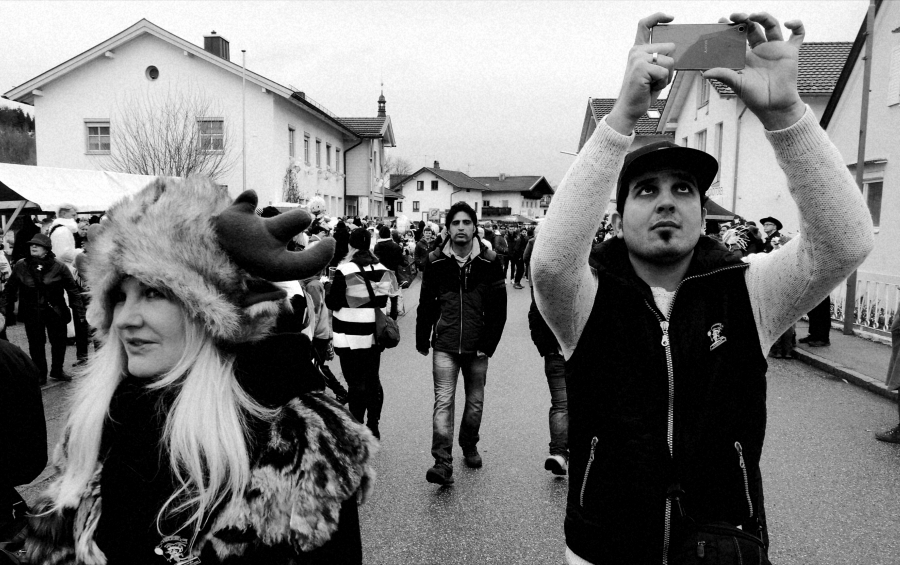 Wesam tapped me on the shoulder and pointed to some guys dancing and drinking beer. She was smiling and I realized why she was amused: They seemed to be dressed as Arab men in headdresses.

Wesam was wearing a hijab and we laughed at the irony. Who knows if people in the crowd thought she was Syrian or just dressed up like one?

But the scene did remind her that she grew up in another world, in Palmyra, Syria, and is an outsider here.

“I am not part of this,” she said. “Maybe the children, the next generation, will be. But for me, no.”

Back at the refugee center in Traunreut, I sat down to dinner with the Daas family. Afterward, Ali and his sisters prepared the shisha. We took turns puffing and began to talk. Sitting on the floor on a colorful carpet after a delicious home-cooked Syrian meal the smells and sounds of the Bavarian carnival faded away.

“I miss everything in Syria, the house, the weather, friends, the people, everything,” Ali said, as he took a long drag on the water pipe.

It felt to me that Ali was expressing the sadness they all feel, the nostalgia for their lost home.

“We had to leave a lot of things behind: memory, story, history.”

But Wesam made it clear that Ali’s emotions cut deeper than nostalgia. The Daases don’t have the luxury to get sentimental. Because the Syria they left behind in Palmyra is gone.

“We left because we were forced to leave, because it's not safe anymore,” she said. “We didn't have a choice, another choice, to go or to stay. It’s just one way.”

The Daas family is still in limbo, still living in temporary housing and still lacking a wider community in Germany. But that evening as we smoked and talked, they were hopeful that soon they would manage to find a house of their own somewhere in Bavaria.

When I asked Ali how he imagined their future home, he said he didn’t need anything fancy, “like everyone: a quiet house and nice life, not more than that.”

He may only long for a simple place, but the significance of finally having a home of their own after two years living as refugees is deep.

“You can’t do anything if you don’t have a home,” Ali said. “Life without home, I can say it’s like a cloud without rain.”

Two Daas sisters exit the refugee housing complex in Traunreut, Bavaria, where they are living until they can find their own permanent housing.

“No, we’ll always be Syrian,” Wesam said. But then she thought about the children she hopes to have one day. They’ll probably look at her and say, “my mother was Syrian,” she said, laughing. “They will forget.”

Whatever sense of home the Daases are able to create for themselves in Germany, their family unity and optimism will be part of it. And so will the home they carry inside them from Syria.

Next in “Finding Home,” Jeanne talks to local residents of Traunreut about their experience of trying to integrate refugees into their community.