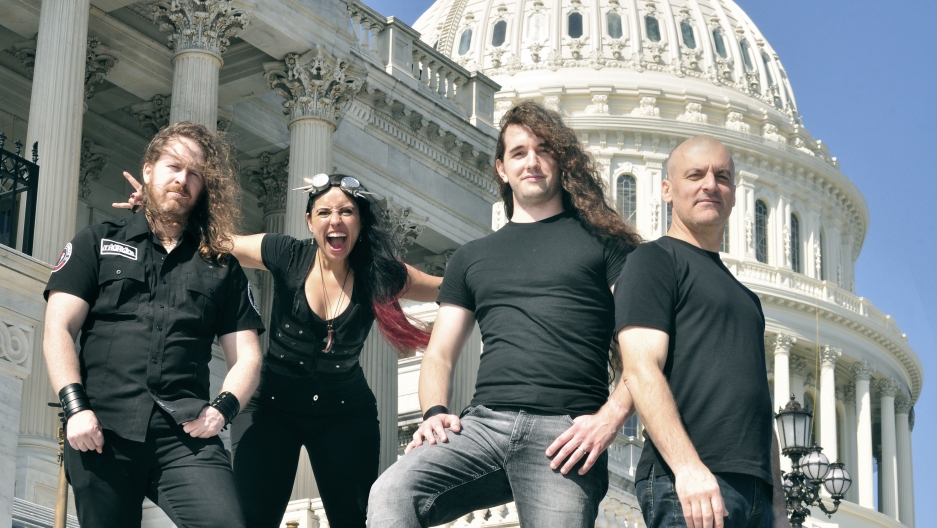 The heavy metal band, Sound of Thunder, has a large audience in Catalonia.

Amid the debate over whether the Spanish region of Catalonia should be allowed to gain its independence, a heavy metal band from the Washington, DC, area has found an unlikely new audience: Catalans.

In early October, Catalan leaders held a referendum on whether the region should separate from Spain. The Spanish government called the vote illegal. National police cracked down hard, shooting rubber bullets and using batons to beat back people trying to vote. Nearly 900 people were injured.

As the violence unfolded, a woman named Nina Osegueda was monitoring the news closely. She lives in a Virginia suburb of Washington, but her mother is Catalan. Many of her relatives still live in Catalonia, including her grandfather, uncles and cousins.

Osegueda wanted to show her support for her family, and came up with an idea. She’s the lead singer of an independent heavy metal band called A Sound of Thunder, which had recently recorded a version of the Catalonian anthem. Two days after the independence vote, they decided to post their song to YouTube.

But the song took off. Within two weeks, it had over a million hits on YouTube. Osegueda’s grandfather became a mini-celebrity in his hometown in northeastern Spain, and one of her uncles did a radio interview about her. Some people even wrote her to say the song made them cry.

“As a metal band, we usually don’t have this huge emotional impact on people. So for people to say it brought them to tears, it was very surprising,” she says.

Osegueda first came across the anthem when she was searching for a Catalan song to record in honor of her mother. The anthem is based off a traditional song that dates back to the 1600s. It tells the story of the Reapers' War, when Catalan farmers rose up against the Spanish monarchy. They used sickles as weapons, which became the national symbol for Catalonia. The song’s name, “Els Segadors,” means “the reapers” in English, which the band members of A Sound of Thunder found to be “pretty metal.”

Here's a version of the traditional anthem, with English subtitles.

The lyrics of both the original and the new metal rendition tell a violent story, but Osegueda says her band doesn’t support actual violence in any way. “The whole violence in the song is more, I would say, a metaphor, than anything real,” she explains. “But for us, as a heavy metal band, it speaks to us.”

Musically, the song translated to heavy metal rather easily, says Osegueda. “It has a lot of dissonant chords, and it sounds very doom metal, so we added a gallop and made it more power metal. But it’s a pretty metal song on its own.”

In the song, Osegueda sings in both English and Catalan, which she said was a little intimidating. Of course, her family in Catalonia is fluent, but she isn’t.

“As soon as we released the song, I was like, oh boy, I’m kind of worried that I might’ve messed up the pronunciation. But all of the comments were very kind. People said I did a good job, ‘way to go, thank you for trying.’”

And she is going to keep trying. She and her band dream of touring in Europe now, including, perhaps, a stop in Catalonia.