At 3 a.m. Sunday morning, under cover of darkness, armed with a microphone and sleeping bag, I scaled the fence of my kids’ school and crept up the path toward the main building. Such drama, I thought, feeling a bit silly. But I wanted to be there early in case Spain’s National Police decided to stage a pre-emptive raid on what hours later would be a polling place in the most controversial vote since democracy came to Spain in 1978.

After a quick search I startled upon a couple of guards near the main entrance of the school in northern Barcelona. Jordi and Maria. Fellow parents and friends. About 50 others were asleep inside.

The guards were both feeling nervous. The referendum, asking Catalans whether they want to form their own country independent of Spain, had been ruled unconstitutional by Spain’s highest court. Spanish Prime Minister Mariano Rajoy had vowed to stop the vote at all costs. 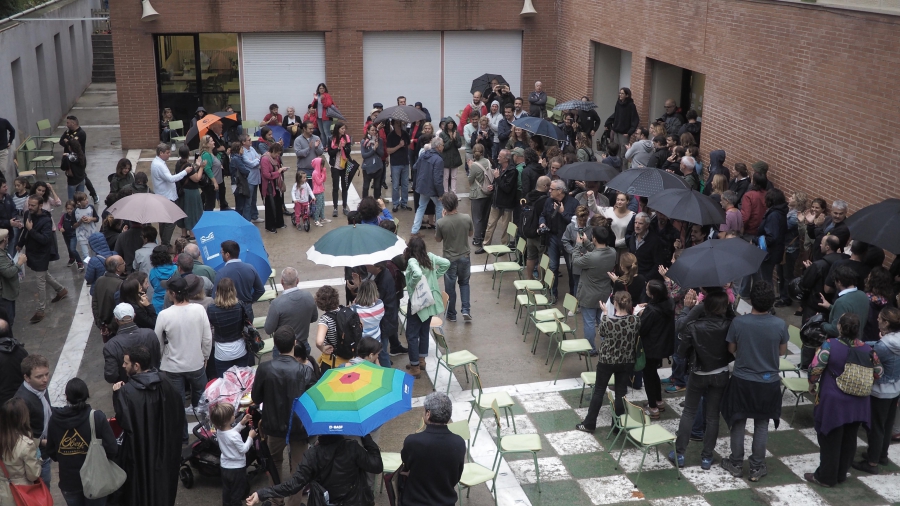 Voters attend a school polling station in northern Barcelona to participate in an outlawed independence referendum.

Already national authorities had managed to confiscate millions of ballots and shut down electronic voting. Thousands of police reinforcements and Civil Guard militiamen had been moved into the Catalonia region in northeastern Spain.

A voter partakes in a risky endeavor: casting a ballot in Catalonia's outlawed referendum for independence from Spain.

Things looked grim. But, even if Spain considered it illegal, Jordi and Maria were adamant that Catalans have the right to “decide their future” through this vote, as did 70 percent of Catalonia’s residents, as a recent poll suggests.

Saturday night passed without incident. At 9 a.m. Sunday, parents opened the door to a steady stream of voters. And at 9 a.m. police operations began.

On social media video after video began making the rounds: authorities storming polling places, beating peaceful crowds with truncheons, throwing people head first down stairs, kicking, choking, punching and shoving the young and old alike. It was clearly a pattern, causing most to conclude that the police had been given a green light to bang heads.

Spanish leaders in Madrid tried to cast doubt on the numbers of injured. They said police were professional and measured in response to a rebellion.

At lunchtime we learned that dozens of anti-riot police vans were heading our way. Soon the street in front of our school was swarming with officers in riot gear and helmets. They began moving parents and neighbors sitting with locked arms outside the school entrance. When the protesters resisted peacefully, the police turned ugly.

Within seconds, Spanish law enforcement were using the same tactics we’d seen online — beating, kicking and so on. As a reporter covering the story, it was painful to record friends and colleagues being savaged. One young student kneeling next to me bent over and vomited while watching the onslaught.

It only took the police a few minutes to clear the door, which was locked shut.

Then they broke it down. Inside, where there were about 200 people, the same pattern unfolded. One of the first to be “escorted” out was a neighbor’s daughter, a university student I’ve known since she was little. My neighbor said one of the policemen offered to take his daughter out to safety. He agreed and told her to let go of the human chain at the school building door. She did. Officers pulled her outside, hit her in the head, then dragged her by the hair and arm up the sidewalk and tossed her past a police barricade.

What followed was more mayhem. Police poured disproportionate abuse on parents, grandparents and students, who raised their hands up and chanted “We are peaceful.”

Peaceful, but breaking Spanish law, to be sure. But does that give justification to the state to follow suit in the name of enforcing court orders? Human rights groups such as Human Rights Watch are outraged. The Catalan government has called on the European Union to condemn Spain’s aggression, but the EU has stayed largely quiet. On Monday, the European Parliament’s president said European lawmakers would debate the issue. Germany, France and Holland called for dialogue while insisting the Catalan question is an internal Spanish affair.

On Sunday, after a short while, the officers in the northern Barcelona school found the ballot boxes. They marched backward out of the school and toward the flotilla of awaiting police vans down the hill.

The crowd of parents followed, chanting “independence!” and waving the Catalan flag. But across the street from the vans you couldn’t help but notice another flag held high: that of Spain. It was a reminder that the region remains deeply divided on the question of whether to separate. 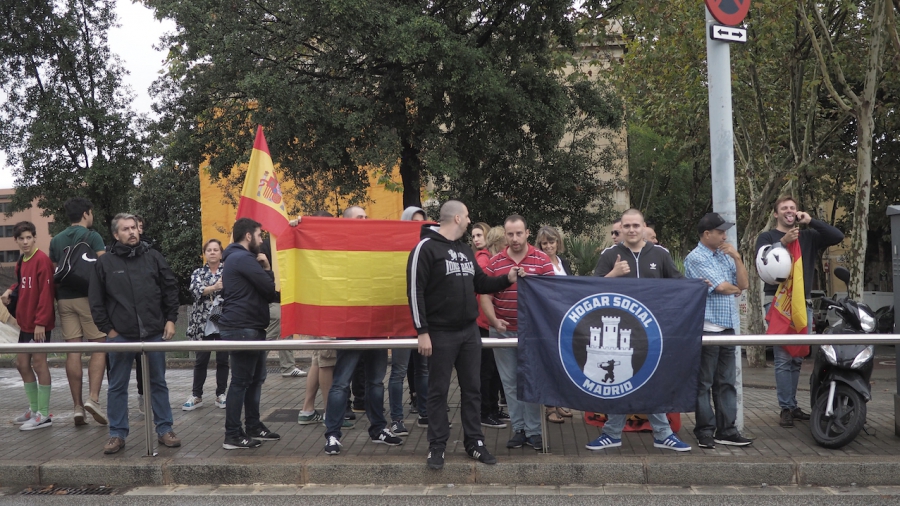 People carried a Spanish flag near a voting center where voters were taking part in a banned Catalan independence referendum.

So the tear in the social fabric here is both local and national — and, sadly, running perhaps too deep to be repaired anytime soon. As one father at the school said, no matter what happens with this vote, “Spain has lost Catalonia forever.”

So what’s next? Shortly after weary parents returned to the school to clean up the mess, Catalonia’s President Carles Puigdemont let it be known that the region would declare unilateral independence from Spain within days. That’s the separatist movement’s nuclear option.

Related: Catalonia is still pushing for an independence vote that Spain calls illegal

Puigdemont did so as he announced results of the vote: 90 percent voted in favor of independence, with a turnout of more than 40 percent. As many as 750,000 votes, however, could not be counted, the Catalan government said.

But Spanish government officials say the referendum was successfully disrupted and that the high “yes” result is because “no”-voters stayed home, recognizing the vote was illegal.

And what about Spain’s nuclear option? It could claim a national emergency, dissolve the Catalan government, take over the region’s affairs and arrest its leaders — moves that could lead to even more violence.

Related: Why one American wants Catalonia to be Europe’s new nation