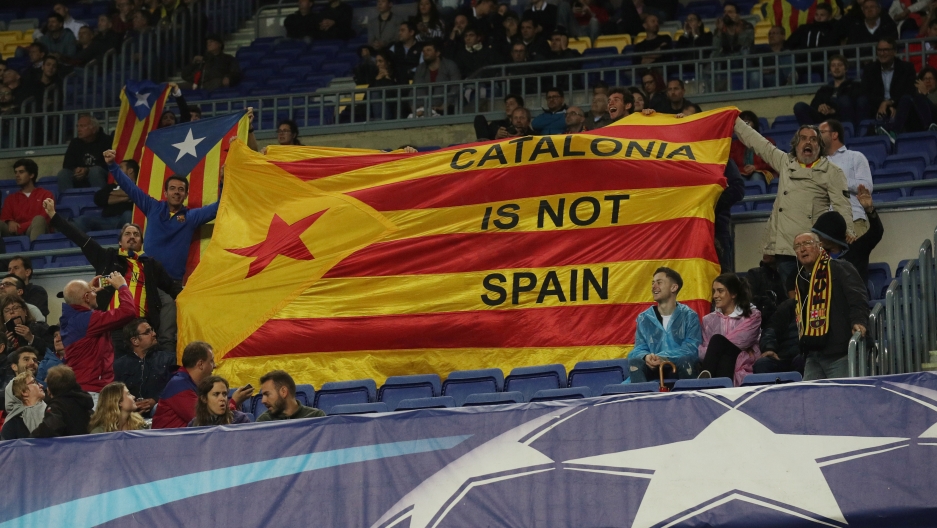 Barcelona soccer fans make their feelings known about Catalan independence at a game on Wednesday, Oct. 18, 2017.

The Spanish government is threatening to revoke the autonomy of the region of Catalonia, in the northeast of the country. The Catalans, for their part, are threatening to declare independence unilaterally.

But what are the roots of the tensions between the national government in Madrid and the Catalan leaders in Barcelona?

There is a host of contemporary issues centered around economics and taxes. Political interests also come into play. But the driving force, at its root, is a conflicting sense of identity — primarily over language — and history.

The traditional language of Catalonia is Catalan. In the past century, however, it’s lost ground to Spanish, or more properly, Castilian (castellano).

The languages are very different. They’re related, but not always mutually intelligible. It's like the difference between, say, German and Dutch, or French and Italian. If you know a little Spanish and walk into a Catalan supermarket, you’d be hard-pressed to understand many of the signs and labels.

The languages emerged with other Latin-based languages from the collapse of the Roman Empire.

The Romans conquered Hispania more than 2,000 years ago. Hispania was the name for the whole area of the Iberian Peninsula, comprising modern Spain and Portugal. Their language — Latin — slowly displaced most of the native Celtic and Iberian languages. Each region developed its own dialect.

When the Roman Empire collapsed, Germanic peoples — most notably the Visigoths — invaded and took over Hispania, establishing a new ruling class.

The lower classes still spoke primarily Latin, and without central control, the local Latin dialects eventually evolved into distinct languages in the early Middle Ages, with their own literatures. These included not just formal Castilian and Catalan, but also Galician-Portuguese, Asturian, Aragonese and other languages.

Visigothic rule was shattered in the 700s by an invasion of Muslim Moors and Arabs, who quickly conquered almost all of the Iberian Peninsula.

The history and identity of the Spanish heartland are rooted in what followed: the 800-year struggle to resist and fight Muslim rule.

But for Catalonia, not so much. The Franks pushed back the Muslims and captured Barcelona for Christendom in 801, ending little more than 80 years of Muslim control — just a blip in the historical memory compared to the 800-year struggle of the Castilians.

The Catalan region, the County of Barcelona, later joined the Kingdom of Aragon, and to some extent forgot about “La Reconquista” and focused on what's important: making money.

Aragon was long a strong commercial power which, like Venice and Genoa, was filled with bankers and merchants. It was also a strong naval power that defended its shipping lanes and established control over the Balearic Islands, Sardinia, Corsica, Sicily, Naples and southern Italy, and even parts of Greece for a time.

Barcelona became a cosmopolitan city with trading networks across the Mediterranean and a patron of the arts. Catalan flourished and became the prestige language of the region and a language of commerce.

The Catalan language area expanded south into Valencia, and across the Balearics, and even farther afield. Catalan is still spoken to this day in one region of the Italian island of Sardinia.

Meanwhile, the kingdom of Castile was absorbed in “reconquering” the lands controlled by Muslim emirs. A stereotype would show Castilians as proud, stubborn, agricultural, warrior-crusaders: very religious, intolerant, stiff and formal. The contrast with relaxed, cosmopolitan Barcelona couldn’t be sharper.

The two kingdoms were then united by marriage, literally, in the persons of Ferdinand of Aragon and Isabella of Castile, who got hitched in 1469. These were the same Ferdinand and Isabella who sponsored Christopher Columbus, destroyed the last Muslim emirate in the south and established the Spanish Inquisition. Their daughter Juana became the first queen of both Aragon and Castile, as well as a bunch of other regions.

But just because the two kingdoms were united with a common monarch doesn't mean they were integrated into one unitary realm. For almost 250 years, they were administered as two separate kingdoms, with separate laws, courts, assemblies and other institutions.

For all that, it was not a happy marriage. In 1640, Catalonia rebelled and sought its independence. It was not an unreasonable hope. Portugal, which had also been united with Spain by dynastic means, also rebelled in 1640 and succeeded in breaking free from the Spanish crown. Catalonia did not. Discontent, sponsored by foreign powers, continued for more than 70 years.

Then in 1714, under a new dynasty, Madrid abolished the ancient medieval liberties and institutions of almost all the different former kingdoms under Spanish control.

That was also the start of discrimination against the Catalan language, as Castilian Spanish became the official language.

The 19th century saw a renaissance of Catalan literature, which helped revive a sense of separate identity. Bear in mind, Madrid was no longer the capital of a global superpower — since Spain lost the mines of Mexico and Peru, it became impoverished and wracked by civil war. So some Catalans started to feel, with their history and literature, that they were perhaps better than the rest of Spain — or at least different enough to start pushing for self-rule.

There were various efforts at self-rule in the early 20th century, but then along came the Spanish Civil War in the 1930s. Catalonia and most of the minority regions of Spain sided with the leftists and fought against the fascist forces of Gen. Francisco Franco — who was aided by Hitler and Mussolini. This is the war of George Orwell's “Homage to Catalonia” and Picasso’s "Guernica."

The war was less about regional identity and more about class war; nevertheless, Franco came down hard on the Catalans and other minority groups after he won the war in 1939.

During Franco’s 36-year rule, all minorities were suppressed: their language, their music and even their dancing. Spanish was the only language permitted in schools. Franco also moved poor Spaniards from elsewhere in Spain to Catalonia to dilute the Catalan population.

It's this period that caused many Castilians to become dismissive of Catalan, as though it were just a bad dialect of their "pure" Spanish.

After Franco’s death in 1975, Catalans signed up for a new constitution that gave them considerable regional autonomy and control over their language and education. For the last 30 years, most school subjects have been taught in Catalan.

That era of discrimination and its legacy help drive modern Catalan nationalism today.

Today, Catalan identity is strong. But the language remains under threat. The kids in Barcelona may speak Catalan in the classroom, but many speak Spanish on the playground.