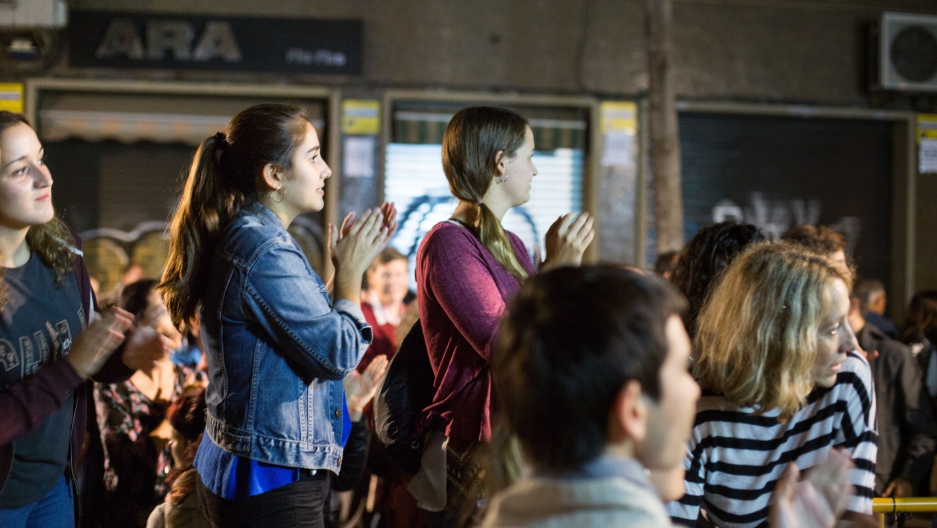 Women wait outside a polling station in central Barcelona, minutes before the final results are announced.

In the 5 a.m. obscurity, Marta’s and Laura’s heavy eyelids are difficult to make out across the fence separating us, but nonetheless betray a sleepless night. The two young women are barricaded inside the Sandaru Cultural Center in Barcelona, a block away from the city’s vast, palm-strewn Parc de la Ciutadella, so named after the remnants of a citadel built after Barcelona’s fall to Spain in 1714, decisively ending Catalonia’s self-rule.

Along with about a dozen others sipping cups of coffee and speaking in hushed tones, Marta and Laura spent the brisk fall night at the center to prevent police from sealing it off before it could be used as a polling place for this past Sunday's referendum on Catalan independence, which Madrid declared illegal and threatened to stop at all costs.

Despite their apprehension, Marta and Laura, who didn't want to use their full names due to the technically illegal nature of the referendum, were quietly excited about the vote.

“If women are part of this reconstruction of a state, we can achieve more egalitarian change,” added Laura, an organizer at her neighborhood’s feminist collective. “We’re not saying Catalonia is better than Spain. This is an opportunity to change things. And what happens here will reverberate throughout Spain.”

Spain’s infamous crackdown on the northeastern region's Oct. 1 referendum — in which at least 844 people were injured by baton-wielding and rubber bullet-firing Spanish police, as well as reports of sexual assault by these same security forces — has only confirmed what Marta, Laura and the throngs of young Catalans clamoring for independence already believed: that the current ruling order from Madrid is steeped in patriarchal violence. That’s why they want to build a feminist republic.

Spearheading this drive for a free and feminist Catalan state is the Candidatura d’Unitat Popular (Popular Unity Candidacy), or CUP — an extreme left, separatist party reviled by Spanish unionists and often viewed wearily by more moderate Catalans. The CUP has seen a meteoric rise to power over the last decade, from grass-roots activism to securing 10 Catalan Parliament seats in 2015. It vows to build a “socialist, feminist and ecologically sustainable Catalan republic.” The face of the party is firebrand Anna Gabriel, who last year publicly denounced the sexist language often leveled at female CUP politicians in a now-famous video.

“My name is Anna Gabriel and I’m a slut, a traitor; I’m bitter and I need to get laid, because I want a free, socialist and feminist Catalonia,” she can be seen wryly declaring into a microphone, donning her trademark jeans, political T-shirt and hoop earrings. This past September, she was once again the subject of controversy for assisting a group of sex workers in Barcelona in occupying a building to establish headquarters for their own collective.

Though polls released prior to the referendum suggested only 40 percent of Catalans supported independence, the CUP, despite its perceived extremism, has managed to shore up unprecedented support over the years, largely due to Spain’s refusal to negotiate terms for greater Catalan autonomy. Working alongside other secessionist parties, the CUP's habit of discussing Spanish “colonialism” and abuse using the language of gender violence and patriarchal hegemony has also gone mainstream. Sunday’s events are likely to make more people adopt the rhetoric.

“The Spanish state and all of its institutions are patriarchal, and they’re founded on the basis that men are positioned above women. And clearly, their security forces adopt that patriarchal mentality.” — Clara Sanchez, CUP

In a video that has now gone viral, a young Catalan woman recounts how Spanish police broke her fingers and groped her breasts while raiding the voting station where she was posted. Reports such as these are on the rise and prompted Barcelona Mayor Ada Colau on Monday to file a complaint against police for sexually assaulting civilians.

“The Spanish state and all of its institutions are patriarchal, and they’re founded on the basis that men are positioned above women. And clearly, their security forces adopt that patriarchal mentality,” said the CUP’s Clara Sanchez. “In a situation like [the referendum], where the Spanish state isn’t upholding human rights and its security forces are infringing on those rights, women are most vulnerable to aggression.”

Patriarchy-fueled language far predates the referendum, however. In August, the CUP unveiled its final separatist campaign posters featuring an ostensibly working-class Catalan woman sweeping away overwhelmingly male representatives of Spanish power — church, crown and capitalist pursuit — with a broom, accompanied by the text, “Let’s sweep them away.”

Last week, CUP lawmaker in Catalan Parliament Mireia Boya called Spanish Prime Minister Mariano Rajoy an “abuser” (the term inescapably carrying domestic violence connotations) who “wants to give us a beating.” Catalans say Rajoy has consistently ignored their attempts at dialogue over the last few years and finally responded with swift and unmeasured violence this weekend.

Independence, then, is a chance to start anew, free of an abusive relationship. “We’re not going to magically have a feminist republic by leaving Spain,” said Laia Estrada, a CUP city councilmember in Tarragona, about 50 miles down the coast from Barcelona. “But here in Catalonia, we can work toward feminism; we can fight for it.”

She defines a feminist republic as one “in which we put all of our efforts into ending the socialization of gender, where we share the workload, both productive and reproductive and redistribute wealth.” The sexual division of labor, where women are relegated to home and child care without any kind of remuneration, is one of the central issues facing Catalonia and Spain, she said.

“It’s like putting on feminist glasses and viewing all political issues in terms of gender.” — Laia Estrada, CUP councilwoman

The CUP’s feminism is intrinsically tied to its socialism. “We live in a patriarchal, capitalist system in which the accumulation of capital is at the heart of everything,” said Sanchez. “The goal of feminism is to make life and people’s well-being the center of all policy.”

Sanchez heads the party’s Building Feminist Municipalities campaign, designed to end day-to-day acts of gender discrimination and make sure all policy is guided by an understanding of gender.

“It’s like putting on feminist glasses and viewing all political issues in terms of gender,” said Estrada, who works with Sanchez to implement the campaign in Tarragona.

The Catalan government said preliminary results showed an overwhelming 90 percent of the referendum’s 2.26 million voters chose to make Catalonia an independent republic, but turnout was low at less than 43 percent.

The constitutional court has ruled to suspend a Catalan Parliament session on independence that the CUP and other pro-independence parties called for Monday.

The CUP has said it will declare independence, regardless of reactions from Spain or the international community.

“At the end of the day, we don’t want to change our flag. We want to change society, and we want women to play a leading role in that change,” said Sanchez. “Because if we’re the ones who’ve always sustained life, and who, thanks to our work, make life worth living, we should have a leading voice.”