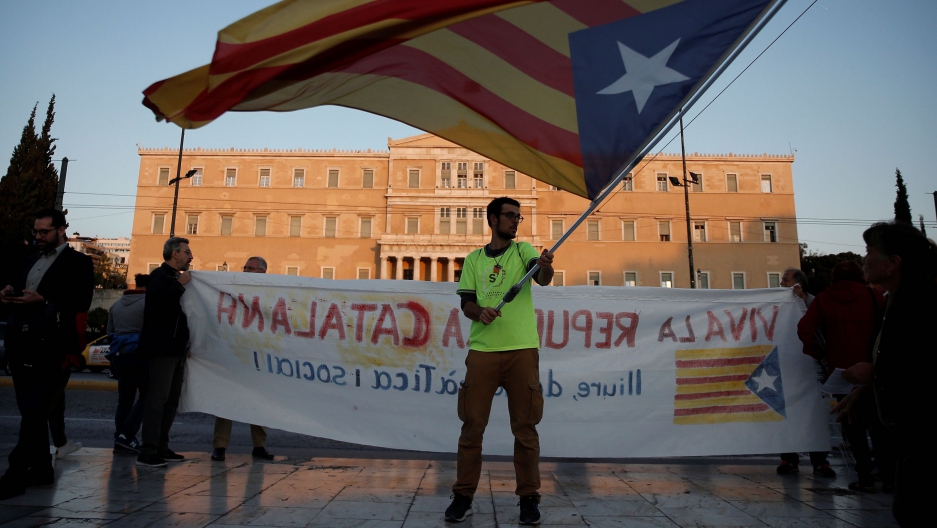 A protester waves a Catalan separatist flag in front of the parliament building before a march to the Spanish embassy in Athens, Greece, Oct. 3, 2017.

As a matter of principle and personal preference, I’m in favor of secession.

Because if the pertinent question about independence referenda like the recent ones in Catalonia and Iraqi Kurdistan is Who gets to have a nation-state? my gut answer is: Whoever wants one! I’m in favor of self-determination. I’m in favor of governments that closely and democratically represent their constituents. I believe that small is beautiful and that large countries tend to be more trouble than they’re worth.

Related: Should Kurdistan break off from Iraq? We asked young voters.

My opinions about secession and nation-states, in general, have been formed by working in a number of countries with separatist movements, like Sri Lanka, Sudan and Indonesia. I became more and more frustrated by the destructiveness of civil wars. The process of fighting to keep a country together often seemed to cost more — in blood, as well as in money — than the separation would.

At the same time, I noticed other countries I traveled to or visited, such as Spain, the United Kingdom, Italy, Mexico, Japan and many others also had groups advocating for secession, even if the conflict wasn’t always violent. In fact, it’s difficult to find a country to live in or travel to that doesn’t have a separatist movement. It seemed to be a fundamental problem with nation-states: There were always groups — ethnic, religious, linguistic or ideological — that felt like they don’t belong, that believed their interests weren’t being addressed. Despite all the efforts to fit pluralism and democracy together — like federalism and proportional representation — there were always groups that thought they would do better on their own.

It’s not surprising that everyone wants their own state: The system we’ve designed makes that desirable. Statehood brings power, significance, recognition and a voice on the world stage. We act as though that status is as God-given as the rights of kings were once thought to be, when, in fact, it has been shaped by a complicated history of warfare, expulsion, colonialism and foreign powers drawing lines on a poorly understood map. Meanwhile, individuals and groups that don’t quite fit into that system are left without protections, scrabbling for rights and autonomy.

All this gave me the idea for microdemocracy, a system of government I explore in my novels "Infomocracy" and "Null States" (and, coming in 2018, "State Tectonics"). Intended more as a thought-experiment than as a utopia, this system separates governance from history and geography, letting small units of 100,000 people each choose their government from anyone available anywhere in the world.

We have the technology to make this work. Many people switch governments every time they cross some unseen municipal border in their city, or when they drive into another state and turning right on red is no longer legal, for example. We also have noncontiguous government already, like Alaska, Gibraltar or Réunion. While the futuristic technology in my books makes the system function more smoothly than it might otherwise, the main barrier to achieving a system like this today is not technological, but political.

As I started to play out the microdemocracy system in my books (along with election shenanigans, chase scenes, katana fights and sabotage), I realized that the challenge with such a system is figuring out where to draw the lines. As with the gerrymandering that has become so common with congressional districts, the question of which 100,000 people get grouped together will determine, to a large extent, what government they choose.

The question, then, isn’t just Who gets to have a nation-state? but How do we decide? because that’s where the lines of power run. Is there a way to divide our world that doesn’t build on oppression or encourage nationalism?

Part of being in favor of secession is believing that we should examine it critically. Maintaining the (arbitrary, recent and hierarchical) status quo isn’t a particularly good reason for refusing a democratic request for a new state. But it does point to some of the pitfalls involved in redrawing borderlines: They can replicate and reinforce those power structures, or establish new and equally arbitrary and unfair ones.

I think it’s generally a positive thing that power these days isn’t always determined by force, but sometimes by diplomacy, democracy and public opinion. The clashes over the referendum in Catalonia are a brilliant example of this: The Spanish government’s decision to use force has undermined their position in the eyes of the international community, and the ability of the independence party to pull off a vote — even a flawed and illegal vote — has made it impossible to ignore the number of people in favor of a separate nation.

But deciding through political maneuvers still favors existing power structures, just different ones. And separating a nationalist state into two new nationalist states still leaves us facing the same underlying problem of trying to fit an unwieldy, ever-changing demographic into fixed geographic borders. What do we do with dense, mixed-demographic cities and cosmopolitan areas that include people from many different groups living side by side?

That’s why in my science fiction I explore a different question: What could we do instead of the nation-state? What comes next? Because what is much more exciting than a new country on the world stage is finding an entirely new way of governing ourselves, a way that is more equitable and representative, a way that better fits the ideologies and technologies of the modern world.

Malka Older is the author of "Infomocracy" and "Null States," science fiction political thrillers that explore the end of the nation-state and what might come next. She is a PhD candidate at the Center for the Sociology of Organizations at SciencesPo and has more than a decade of experience in international humanitarian relief and development.