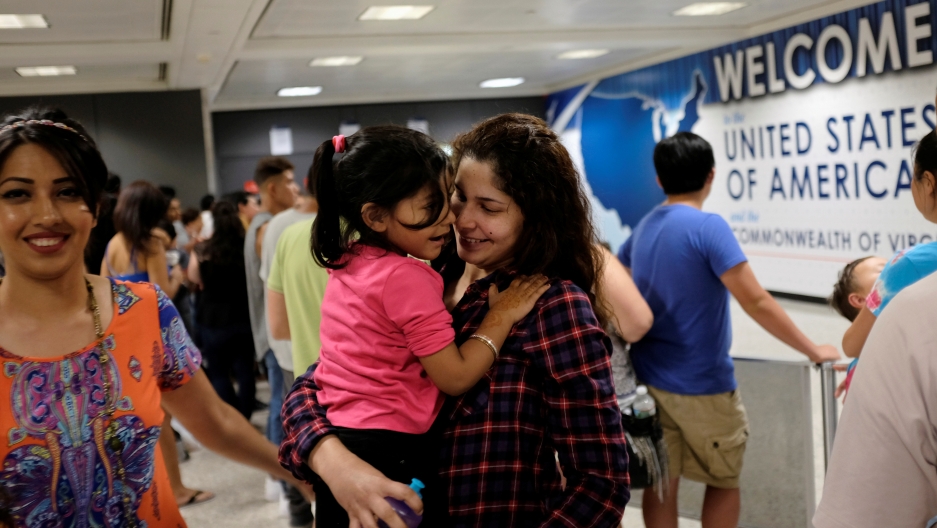 Zarfishan Zahid, left, smiles as Sana Tahir, right, holds Malaika Noman, 3, as the child arrives in the United States after a federal judge ruled in July that President Donald Trump's temporary ban on travelers from a half dozen countries could not stop grandparents and other relatives of US citizens from entering the country, at Washington Dulles International Airport in Dulles, Virginia, on July 14, 2017.

US federal judges ordered a freeze on President Donald Trump's newest travel ban this week, saying it was essentially targeted at Muslims in violation of the US Constitution.

Maryland District Judge Theodore Chuang said Wednesday the ban on travelers from over half a dozen countries essentially had not changed from the first two versions, which were shot down in lower courts as discriminating against a single religion.

He pointed out, as in earlier rulings, that Trump had repeatedly promised a ban on Muslims coming into the country during last year's presidential election.

Chuang was the second federal judge this week to order a block on the open-ended ban, issued in a White House executive order in September and which was set to take effect on Wednesday.

On Tuesday, Hawaii District Judge Derrick Watson also objected to the ban, saying it illegally discriminated against populations of countries named in the order and would not, as it claimed, add to US national security.

Trump's third set of travel restrictions again named Iran, Libya, Somalia, Syria and Yemen, and added Chad and North Korea to the list, while also barring many officials from Venezuela.

Trump has battled with the courts since the first version of the ban, and in June finally gained Supreme Court approval to implement an amended second version for 90 days, which ended last month.

Despite temporary blocks from courts, previous travel restrictions have already affected people with ties to the targeted countries.

“I have friends and colleagues who had to cancel weddings, who had to figure out how they were going to be able to ever see their grandparents again,” said Jamal Abdi, policy director at the National Iranian American Council.

Given past challenges to its travel restrictions, Abdi suspects the Trump administration knew this latest iteration of the travel ban “was not going to pass muster.”

“And my fear is that this is sort of the status quo, and that the administration is actually fine with it — that they have actually achieved what they intended to do, which was to drive down travel from these particular mostly Muslim-majority countries,” Abdi said.

Hundreds of protesters gathered in front of the White House on Wednesday, chanting "no Muslim ban," and "no ban, no wall, freedom for all" — referencing Trump's plans to build a wall on the Mexican border.

Yemeni Fathi al-Huthaifi, 41, told Agence France-Presse his wife is stranded in Saudi Arabia as a result of the ban.

"She's waiting for her visa but the travel ban makes it delayed, delayed," explained Huthaifi, who has five children, all with US citizenship.

On Tuesday, the White House said it would fight the decision from Judge Watson, pointing to yet another likely fight in the Supreme Court.

"We are therefore confident that the judiciary will ultimately uphold the president's lawful and necessary action and swiftly restore its vital protections for the safety of the American people," the White House said.