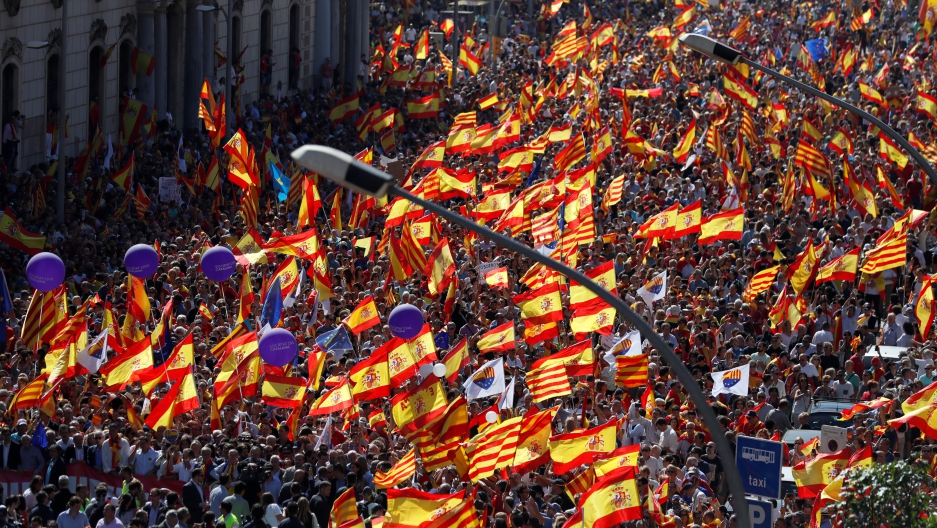 A pro-union demonstration organized by the Catalan Civil Society organization makes its way through the streets of Barcelona, Oct. 8, 2017.

The French government said Monday that it would not recognize Catalonia if it declares independence from Spain.

This stance doesn’t surprise Steven Erlanger, the chief diplomatic correspondent for the New York Times. “Regionalism is such a sensitive topic [in Europe] that still so many years after the Kosovo war, five of the 28 members of the European Union still do not recognize Kosovo as an independent country."

Catalonia voted overwhelmingly for independence in a referendum on Oct. 1. The central government in Madrid called the referendum illegal and police tried to shut it down, beating up voters and firing rubber bullets at them.

Separatist politicians say they will move ahead with a unilateral declaration of independence over Spain’s objections. Catalonia’s president, Carles Puigdemont, is scheduled to address the Catalan legislature on Tuesday.

As Spain sinks deeper into instability, the EU has remained largely silent.

Erlanger says the situation in Catalonia has put the EU in a tricky situation — it might be troubled by the violence, but it doesn’t want to encourage separatist forces that threaten many of the nations within it. “If it’s Catalonia today in Spain, [tomorrow] it could be the Basques in Spain, it could be Corsica in France, it could be northern Italy, it could be Transylvania in Romania,” says Erlanger.

“There has been a feeling that Europe has enough problems without having to deal with countries getting tinier and tinier.”

To hear Erlanger discuss the EU's thinking on the Catalan situation, listen to the audio above.