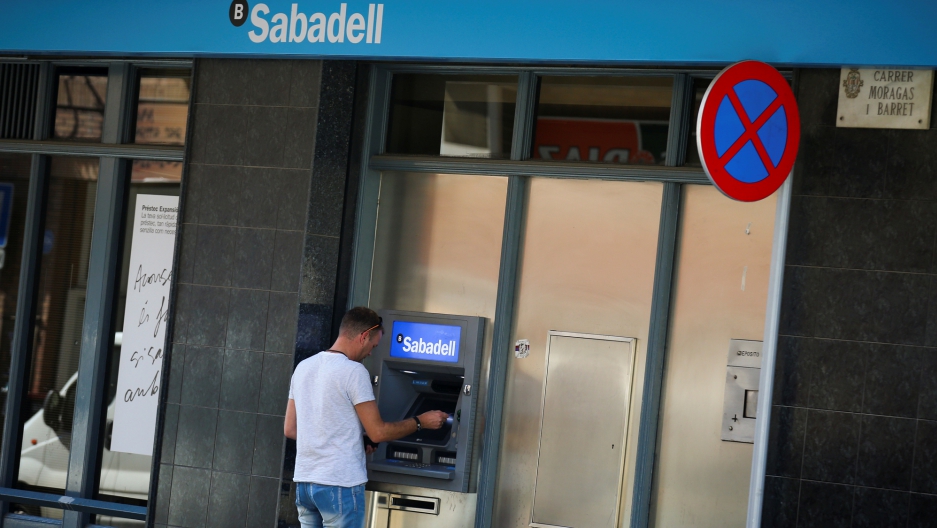 A man uses a cashpoint at a Sabadell bank branch in Pineda de Mar, north of Barcelona.

Spanish judges ordered Catalan lawmakers Thursday to suspend a planned session that could see the region declare independence as the national government rejected calls for mediation in a volatile standoff.

The social and economic stakes of Spain's deepest political crisis in a generation mounted as banks planned to shift their domiciles from the region and rival footballers weighed in.

Catalan regional President Carles Puigdemont lashed out at the government's "catastrophic" handling of the crisis and said he was open to mediation.

But Prime Minister Mariano Rajoy's office retorted that the government "will not accept blackmail."

'Not afraid of jail'

Catalan leaders have threatened to declare independence within days — possibly during Monday's plenary session in the regional parliament.

But the Constitutional Court on Thursday ordered the session to be suspended while it hears an appeal by rival politicians.

It said the parliament's leaders could face criminal action if they ignore the court order.

Puigdemont and other Catalan leaders have said they are not afraid of going to jail over their independence bid.

They carried out the referendum in defiance of a ban by the Spanish court and stern warnings from the national government in Madrid.

Thursday's ruling raised the question of how the Spanish state will respond if Catalans decide to push ahead with Monday's session.

It was not carried out according to regular electoral standards but Puigdemont said it had lent legitimacy to the independence drive.

If Catalonia declares independence, Spain could respond by suspending the region's existing autonomous status and imposing direct rule from Madrid.

The speaker of the Catalan parliament Carme Forcadell warned such a move "would just increase support for the pro-independence side."

With its own language and cultural traditions, demands for independence in Catalonia date back centuries but have surged during recent years of economic crisis.

Catalonia is the country's richest region, accounting for a fifth of Spain's economy and home to thousands of domestic and foreign companies employing millions of people.

Spain's fifth-biggest bank Sabadell decided on Thursday to shift its registered domicile away from Catalonia in an administrative process expected to take a few days, a company spokesman said Thursday.

Catalonia's biggest lender CaixaBank will also hold discussions on Friday about possibly shifting its legal domicile out of the region, a source close to the matter told AFP.

"This is not a question of mediation ... This is a question about enforcing the law," he told Bloomberg news agency.

Barcelona Football Club, a powerful symbol of Catalan identity, and its captain Andres Iniesta called for dialogue to settle the crisis.

"Before we do any more harm, those who are responsible for all this must hold dialogue. Do it for all of us. We deserve to live in peace," Iniesta wrote on Facebook.

His Spain team mate Sergio Ramos of Real Madrid said he hoped the crisis will be "resolved as soon as possible," speaking at a news conference ahead of Friday's World Cup qualifier against Albania.

But Ramos also said "hats off" to Spain's King Felipe, who angered Catalan leaders by calling them to drop their independence drive.

Elsewhere on Thursday, a summit of southern European Union countries scheduled next week in Nicosia was postponed due to the Catalan crisis, Cyprus President Nicos Anastasiades announced.

By AFP's Emmanuelle Michel and Roland Lloyd Parry in Madrid.