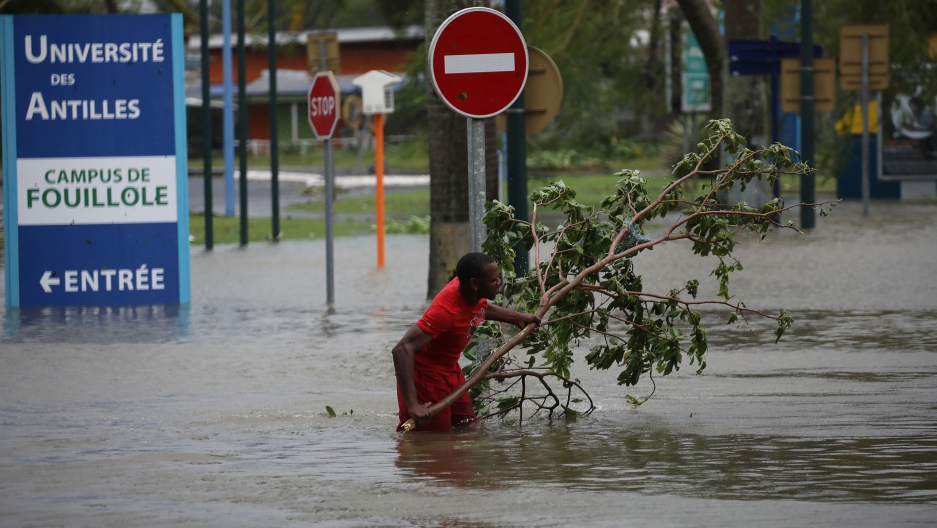 A man removes a branch in a flooded street after the passage of Hurricane Maria in Pointe-à-Pitre, Guadeloupe. The powerful, Category 5 storm is expected to reach Puerto Rico and the US Virgin Islands on Wednesday.

“I am at the mercy of the hurricane. My roof is gone. House is flooding,” Dominica’s Prime Minister Roosevelt Skerrit posted to his thousands of Facebook followers before being rescued.

He is among the Caribbean island’s 72,000 residents facing the aftermath of powerful Hurricane Maria, which made landfall as a Category 5 storm late Monday.

Skerrit called the damage “mind-boggling,” although there were no immediate reports of deaths or injuries.

Maria reached maximum sustained winds of nearly 160 mph at the time of landfall, ripping roofs off buildings. Dominica’s airports and seaports are expected to be out of commission for several days and Skerrit is asking neighboring countries for assistance with surveying the damage.

The country was largely spared by recent megastorms Irma and Jose that tore through other parts of the Caribbean.

The destruction is a devastating blow for Dominica, just two years after Tropical Storm Erika leveled the island, killing at least 20. At the time, Skerrit said the damage set back development and infrastructure in Dominica by 20 years, forcing them to rebuild the nation. Since then, the Dominican government had championed the island’s recovery and rebuilding efforts.

Related: Is climate change the culprit in Tropical Storm Erika?

That recovery now stands to be a complete loss as Dominican officials are reporting catastrophic damage.

“Initial reports are of widespread devastation. So far we have lost all what money can buy and replace,” Skerrit wrote on Facebook. “My greatest fear for the morning is that we will wake to news of serious physical injury and possible deaths as a result of likely landslides triggered by persistent rains.”

Dominica is part of a volcanic chain of Caribbean nations known as the Leeward Islands. They have faced enormous destruction this hurricane season, with major storms — including Irma and Jose — barreling down on neighboring Antigua and Barbuda, the British Virgin Islands, Anguilla and Turks and Caicos.

As PRI first reported, storm evacuations on Barbuda have left no residents on the island for the first time in its 300-year history. Ronald Sanders, Antiguan ambassador to the US, told The Takeaway that Irma was “the most ferocious, cruel and merciless storm” in the island’s history.

After battering Dominica, Maria temporarily weakened while passing over the French territory of Guadeloupe before restrengthening to a Category 5. It is now heading west toward St. Kitts and Nevis and the British territories of Montserrat and the British Virgin Islands.

The storm is expected to reach the US Virgin Islands and Puerto Rico on Wednesday, with tropical storm-like winds already reaching the island. The two US territories are already recovering from the effects of Hurricane Irma.

Related: Irma rips through the Caribbean, with a wallop to the US Virgin Islands

Largely spared before, Puerto Rico’s main island is now directly in Maria’s path. Gov. Ricardo Rosselló is calling on residents living in areas vulnerable to flooding and landslides to make preparations, saying in a government release that “it is time to act and evacuate.” The government said 500 shelters are available for residents who cannot leave.

“We need to keep in mind that we must also protect the lives of these first responders,” Rosselló said in the statement. “It's time to act and look for a safe place if you live in flood-prone areas or in wooden or vulnerable structures."

Puerto Rico’s smaller, municipal islands of Culebra and Vieques were ravaged by Irma. Residents there are still picking up the pieces, with some experiencing more than 10 days without electricity, adequate food supplies and fuel. Ferry services and flights between Vieques and San Juan are shut down and San Juan's airport is set to close Tuesday night.

Vieques residents like Stephanie Latona say they have no other option but to hunker down and ride out yet another major storm.

“We’ve already been miserable and now with Maria coming? I don’t think we can take anymore,” she says. “We’re already stressed out and I’m worried it’ll be worse this time.”

Latona previously spoke with PRI after Irma and criticized the lack of attention focused on the American territories by the federal government and media in favor of Florida.

She says reassurances the Puerto Rican government is giving to residents on the main island aren’t reaching people in Vieques. After days of slow relief and limited communication, she says tensions are rising.

“Not everyone here is equipped or experienced in dealing with hurricanes,” Latona says. “So to get no guidance from our own government is shameful.”

She adds that repeated attempts to get updates from the Puerto Rican mainland and continental US have been largely ignored. PRI's requests to interview Vieques Mayor Víctor Emeric went unanswered. Latona says residents have been left to fend for themselves.

“We’re a resilient little island where people care about each other and really stick together,” she says. “So let the struggle begin.”

President Donald Trump has already declared the Virgin Islands a major disaster area and declared a state of emergency for the territory, as well as for Puerto Rico, ahead of Hurricane Maria’s expected landfall on Wednesday. The White House also announced President Trump plans to visit Puerto Rico and the US Virgin Islands to survey relief efforts, although details are still forthcoming.