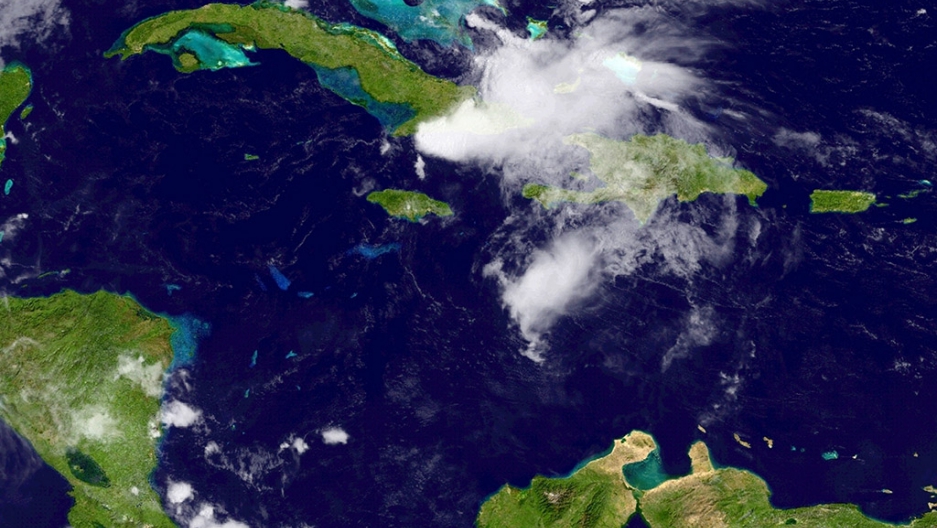 In this handout provided by the National Oceanic and Atmospheric Administration (NOAA) from the GOES-East satellite, Erika, a tropical storm is pictured losing strength as it passes over Haiti on Aug. 29, 2015.
Credit: NOAA/NASA GOES Project
Share

PORT OF SPAIN, Trinidad — Rescue teams are still searching for dozens of missing villagers in rural areas of the Caribbean island of Dominica, days after Tropical Storm Erika caused massive flooding and landslides.

The storm has already killed at least 20, and Prime Minister Roosevelt Skerrit says that number could rise as helicopters reach areas cut off by eroded roads.

Dominica was the island worst affected by the storm — which weakened over eastern Cuba on Saturday, losing its title of tropical storm after drenching Haiti and the Dominican Republic. Heavy rains could still hit parts of Florida.

In his address to the nation late Friday, Skerrit continued his call-to-action after tweeting that Dominicans are “living the effects of climate change.”

We are living the effects of climate change. Years ago, flooding in Dominica was something unheard of.

“Let us consider this disaster as a test of our ability to respond collectively, patriotically and imaginatively to the peculiar challenges of globalization and climate change that have been intensifying since the start of the 21st century,” he said.

Dominican photographer Chris Louis traveled throughout the country photographing the storm’s destruction. He says the damage from Erika is some of the worst he’s seen and climate change could be to blame.

“We usually expect [mudslides] when heavy rains follow a prolonged dry spell, and there has not been much rain recently,” he says. “[But] a few years ago, this kind of weather would not have done as much damage.”

“It’s messing up our economies, creating a perpetual recession,” he says. “Most of the islands of the Caribbean have been experiencing a really rigorous drought. We were coming into this hurricane season in the weird position of really hoping for some water without extreme flooding. So it wasn’t just the storm that kind of signaled climate change for us.”

But Dr. Michael Taylor, professor of physics at the University of the West Indies at Mona, cautions against pinpointing a single storm as an indicator of climate change. He says several factors could have contributed to Dominica’s substantial flooding and landslides.

“You have to be wary of taking one storm as a sign of what’s to come,” he says. “But a storm like this makes us sit up and pay attention. The science is supporting the fact that underlying conditions for these intense rains is a result of warming global temperatures.”

Debate over climate change in many Caribbean nations is largely divided. Within Dominica’s diaspora, some aren’t ready to declare Erika’s damage a direct result of a changing environment.

Kevin Dorsett, a Dominican now living in Washington, DC, says that while he does think storms are getting stronger, Erika could just be a case of the most vulnerable island at the worst possible time.

“I don’t believe climate change was the result of this,” he says. “Dominica is not like the rest of the Caribbean. It is very mountainous and rarely has any flat areas. We [have] tons of rivers and lakes so, with all the non-stop rain, rivers just overflowed.”

On the island, Sabra Luke says climate change isn’t something people in Dominica usually consider. Right now, rescuing trapped and missing Dominicans is their only priority. She says some of the hardest hit areas are barely recognizable.

“There are many persons who have lost everything,” she says. “Medical teams are needed here; we need emergency relief supplies.”

The search for missing Dominicans will continue throughout the weekend. In his address, Skerrit called on the international community for help.

“We have, in essence, to rebuild Dominica,” he says. The prime minister estimates that tropical storm Erika has set back development and infrastructure in Dominica by 20 years.