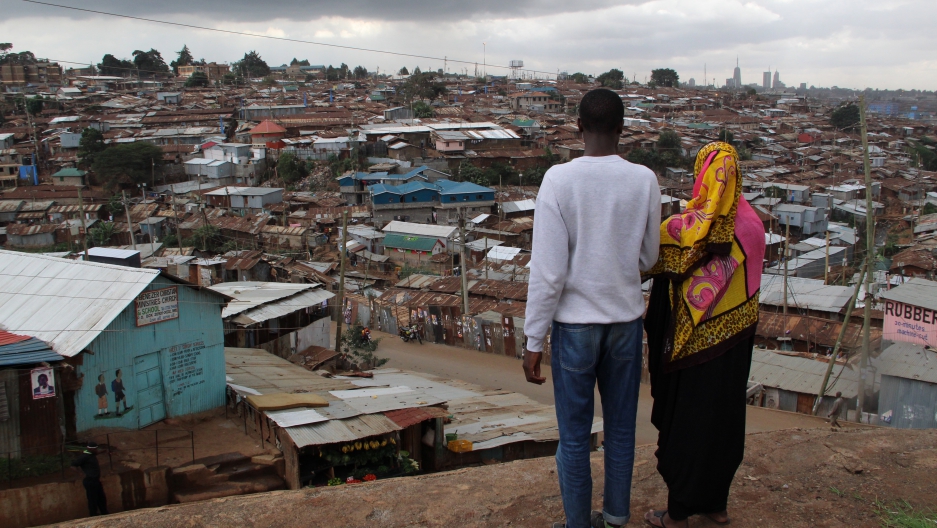 Ben and Salma are studying journalism at the Nairobi community news hub, Habari Kibra. They are looking out over their home, Kibera, one of the largest slums in the world.

The student journalists of Habari Kibra are gathered in a mobile classroom in the middle of their hometown, Kibera, a huge slum on the outskirts of Nairobi.

Their teacher, Thomas Bwire, is having them go over some recent articles about their community. He asks one student, Salma, to read the opening lines of a story from the BBC.

“Kibera slum in Kenya’s capital Nairobi has been identified as a potential flashpoint for violence in the fiercely contested 8 August general election,” she reads.

It’s a potential hot spot because violence has happened there before.

In Kenya, politics often falls along tribal lines. Kibera is ethnically mixed, but its large and powerful Luo population makes it an opposition stronghold. Back in 2007, when opposition candidate Raila Odinga lost his bid for the presidency, Kibera exploded into chaos. Campaign rhetoric made old grudges good reasons for fresh violence against neighbors from another tribe.

Odinga, a former prime minister, is running for the fourth time this year in a tight race against incumbent President Uhuru Kenyatta. Many fear contested results and the violence that could ensue if either side cries foul. 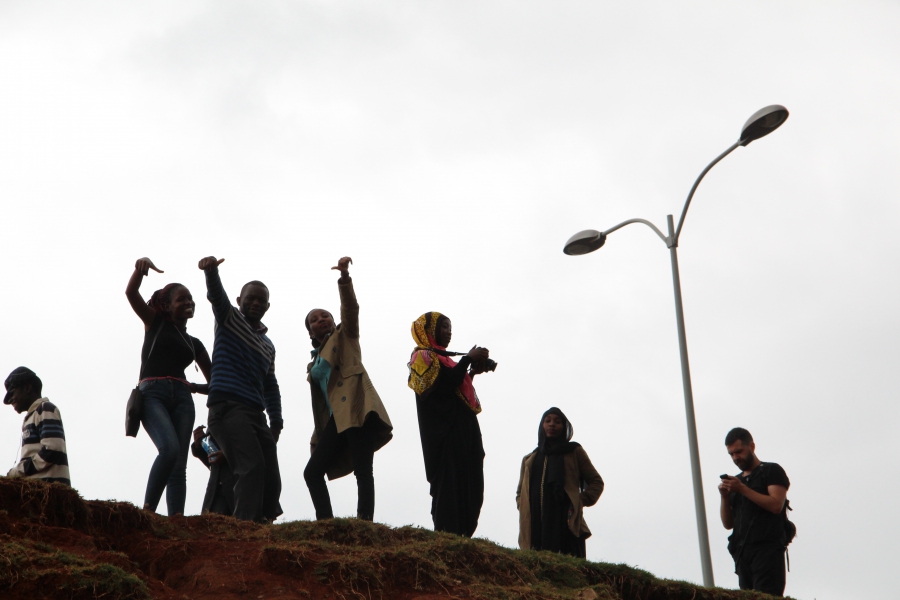 The Habari Kibra student journalists are shown on a recent photography field trip in their community, Kibera.

The students at Habari Kibra come from many different tribes, a deliberate choice by Bwire and his co-founder, Michelle Mulemi. The classroom might feel like a safe space, but the tension in Kibera is growing. When Bwire asks the student journalists to share what’s been happening in their neighborhood, Salma raises her hand. She says she went to one of the rallies held by local politicians.

“Only Luhyas were supposed to attend,” Salma says.

The class laughs; Salma is definitely not from the Luhya tribe. She’s Nubian, a tribe that is predominantly Muslim. She normally wears a headscarf, but she took it off to go to the rally. 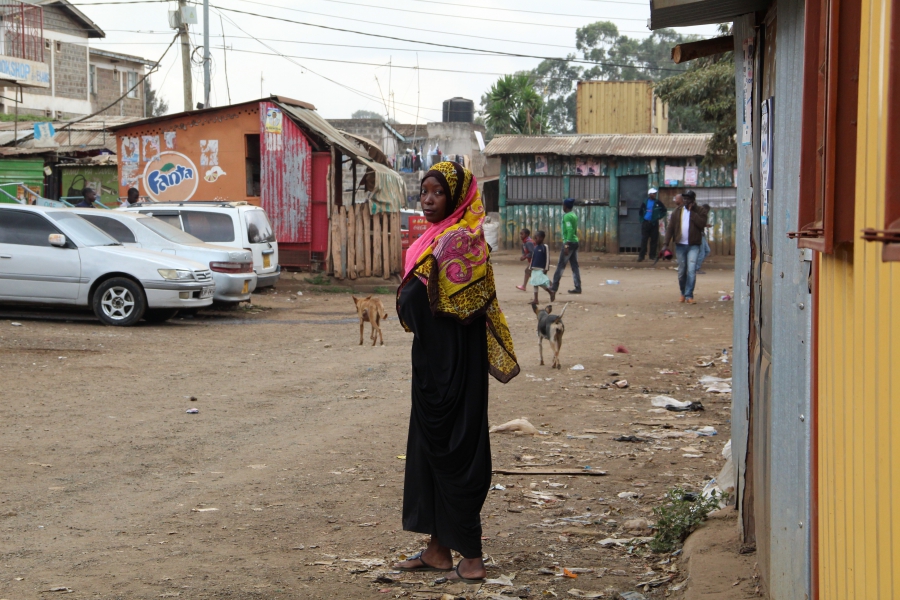 Salma took off her headscarf to go undercover to a meeting held by a politician from a rival tribe in her community.

“There is a beef between Luhyas and Nubians,” Salma explains. “[At the rally,] I heard women saying that they don’t want their children to be here because the Nubians might attack them.”

“A lot of people have been traveling,” she adds.

By traveling, she means leaving Nairobi ahead of the elections. Lots of people from Kibera are leaving, including Salma and half the students at Habari Kibra. For the past week, bus stations in Nairobi have been jammed with people heading to ancestral homelands, where they can be among members of their own tribe and, thus, less vulnerable to violence.

Only two students — Ben and Abbas — are staying in Kibera. They plan to cover the elections with Bwire. It will be their first major reporting assignment.

On this day, however, the students have the more lighthearted assignment of taking pictures around Kibera. They have to take turns — Habari Kibra only has one professional camera.

The mood is festive, the students are like teenagers on a field trip — which is basically what they are. At one point, everyone stops to watch a small group of children using fallen electrical wires to swing, Tarzan-style, over a ditch filled with trash. Everyone agrees it looks dangerous, but fun.

As we walk, I catch up with 22-year-old Abbas, a tall guy in dark glasses. He’s been doing taekwondo since he was a kid and says he usually trains for at least three hours a day. Sometimes more.

Abbas tells me he’s been digging into the tension he feels in the neighborhood. People don’t talk openly, Abbas says, so he’s figured out strategies to get information.

“When you do your investigations, you just go where people are drinking,” he says. What he’s been hearing in the bars worries him.

He also worries about the influence of money. Abbas says politicians often offer handouts in exchange for support. Kibera is incredibly poor so people are desperate.

Abbas says he has his own opinions about the elections, but he keeps them to himself.

“When you show people how you are,” he says, “some will treat you like an enemy. In Kibera, it’s better not to show your true colors.” 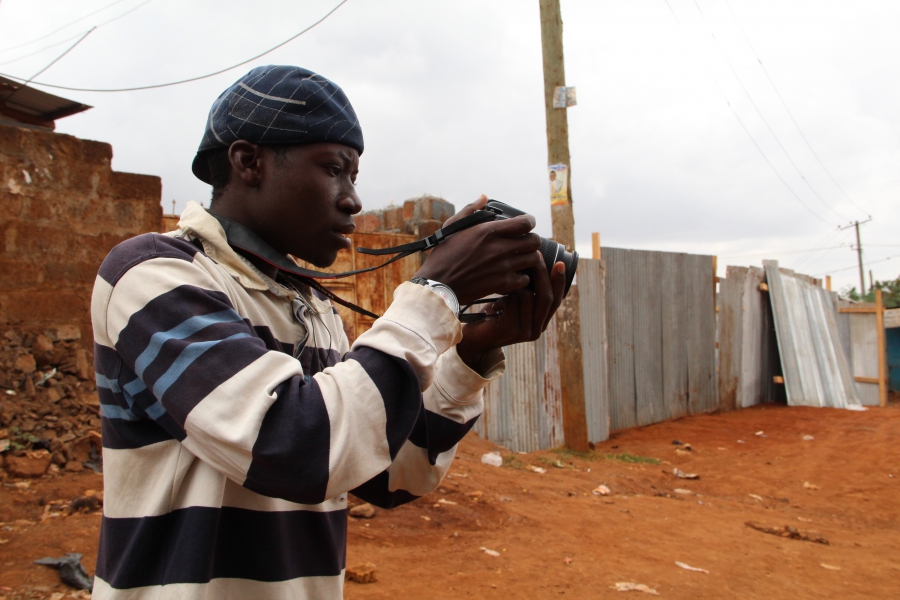 Abbas practices taking pictures with Habari Kibra's only camera. His true passion, though, is making radio.

Abbas adds that, as a young guy growing up in Kibera, he has to negotiate a lot of rival gangs and groups. And he’s learned to be nice to everyone and keep his feelings on the inside. It means he can go anywhere.

He says it also makes him a better journalist. He tells me about a book he read by a BBC reporter who worked in Afghanistan.

“He was interacting with [the] Taliban and soldiers,” Abbas says. “As a reporter, you have to be in the middle. You don’t show that you support a specific group. That book really encouraged me.”

Abbas is excited to cover the elections. But, he admits that if it looks like violence is going to break out in his community, he won’t just stand on the sidelines. He’ll try to use his powers of persuasion to break up fights. 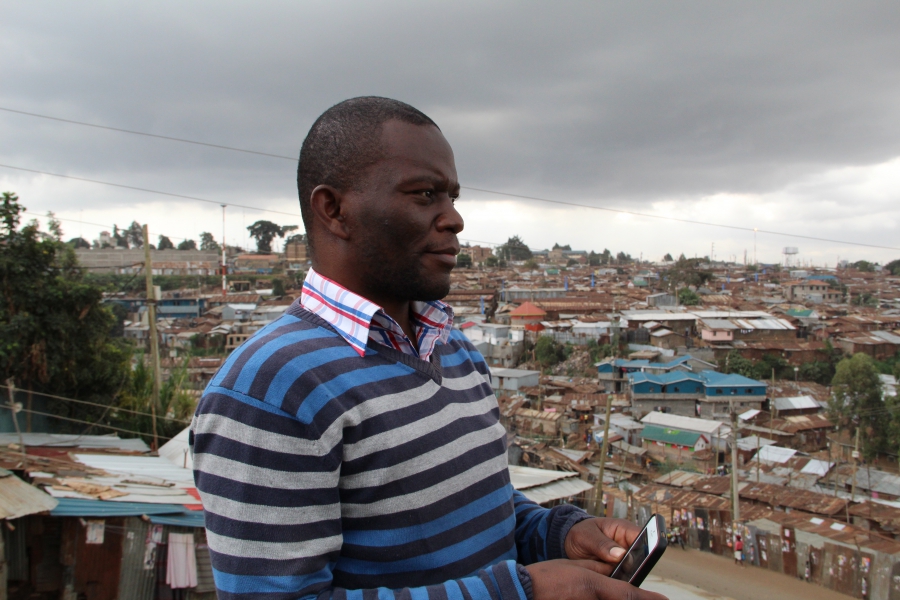 Tom Bwire worked as a community journalist in Kibera for many years before co-founding Habari Kibra.

At this point, Bwire catches up with us. He’s spent years as a reporter in Kibera — mostly with a local radio station, Pamoja FM. He knows everyone and everything about this area so he feels that he’s the one to tell the world about what’s happening here in Kibera, despite the risks. He was attacked by a huge mob of young men while he was covering the elections in 2013.

“They were very angry, they were like, 'We don’t want media here,'” Bwire says. “By the time I was explaining myself, I was beaten, I lost my recorder.”

Bwire was eventually rescued by locals who recognized him. It was a narrow escape, and he ended up in the hospital.

Now, Bwire tells the story with some bravado, but it is still scary to think of the kind of situation he could find himself in again, come election day. He says he’ll take precautions, but still.

Bwire says he founded this journalism hub as a way for people from Kibera to tell their own stories.

These young journalists call Kibera home. And, whatever happens on election day, they won’t just be reporting it, they'll also be living it.