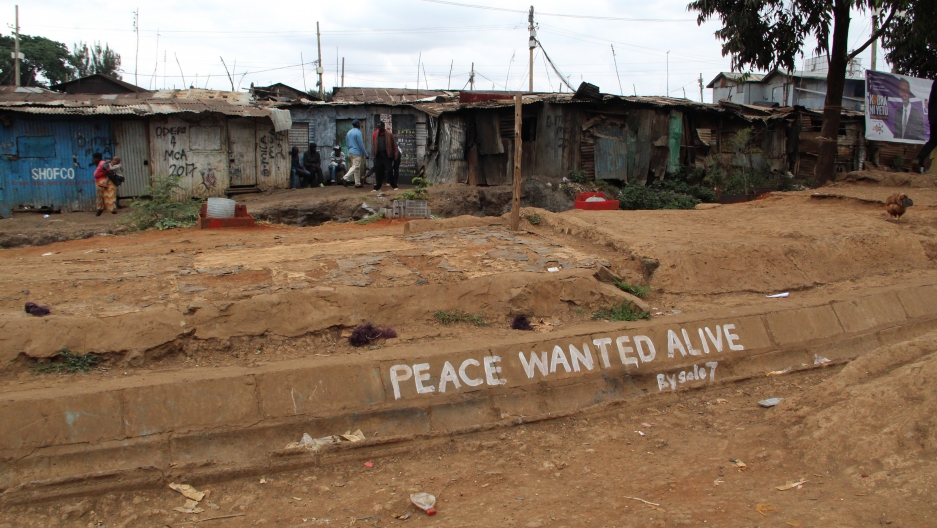 Peace messages by graffiti artist Solo7 adorn Nairobi's Kibera slum in the run-up to the election on August 8.

Two videos emerged recently on Kenyan social media: One appeared to be from the BBC, the other from CNN. Both claimed that incumbent President Uhuru Kenyatta was way ahead in the polls for the presidential election on Tuesday.

But, in reality, the most recent polls show Kenyatta is neck-and-neck with his opponent, Raila Odinga.

What surprised him about these most recent fake videos, particularly the “CNN” video, was the quality of their production.

"It has the CNN logo, the CNN International logo and a follow-up clip with the CNN anchor speaking about stories somewhere in Iraq and Syria,” he says. “It has everything.”

Basically, a bogus clip about Kenyatta having a major lead in the polls was inserted into a real CNN news report.

Even the poll itself came from a real poll — however, the screengrab image was taken before the poll had closed.

In fact, the production is so slick that many people have been left wondering if political parties are financing them. A lot of money has gone into this campaign. It recently emerged that Kenyatta’s Jubilee Party hired Cambridge Analytica, the big data company credited with helping Donald Trump secure his victory in the 2016 US presidential elections.

This report on Kenyan President Uhuru Kenyatta is fake. CNN did not produce or broadcast this story.

If parties are behind these bogus videos, it’s a worrying prospect, especially since some Kenyan politicians, including the current president and Vice President William Ruto, have been accused of inciting violence in past elections. In fact, the two men were brought before the International Criminal Court before charges were dropped due to a lack of evidence. They were not, however, acquitted of the charges.

Pre-election anxiety is rising after two instances of violence targeting top officials in the run-up to Tuesday’s vote. A little over a week ago, an armed intruder stormed the vice president's home, and a top election monitoring official was tortured and murdered. It doesn't bode well — and makes Kenyans even more fearful that a contested result could lead to the same kind of large-scale violence, looting and riots that took place in 2007.

Kenyans tend to use technology like the messaging tool WhatsApp to share news about the election, but in a recent survey, many said they don’t fully trust information shared online.

Shiundu thinks whoever doctored the CNN video was probably thinking about that.

“Most people still trust the mainstream media — newspapers, TV and radio,” he says. “They see something online and, unless they hear it on the mainstream, they most likely won’t trust it.

“Sometimes you’ll hear conversations where [someone says] ‘I saw this on WhatsApp’ and people ignore it,” Shiundu says. “But if the person adds, ‘It was also on TV or radio,’ then everyone sits up and is like … ‘Which radio [station]? When? Okay, I’ll need to listen to that.’”

Shiundu thinks that the creators of these fake videos wanted to harness the wide reach of WhatsApp. It’s also difficult to monitor what’s being said or shared there because people communicate on it in closed groups and the data are encrypted. For this reason, analysts have nicknamed it a form of “dark social.”

And some of what is shared on WhatsApp is truly dark — last month, Kenyan authorities identified 21 WhatsApp groups spreading hate and warned that their administrators would be held accountable.

In Kibera, one of Nairobi’s largest slums, rumors are the original fake news, and they’ve led to bloodshed during past elections.

During the 2007 elections, there were widespread rumors of vote rigging that were never confirmed. Opposition candidate Raila, a former prime minister, was running then too — this year is his fourth run for president. Kibera is an opposition stronghold and, minutes after Raila’s loss was announced, violence broke out.

Raila warned against vote-rigging this week.

This year, rumors about the elections are flying fast and furious again in Kibera.

“The most recent rumor that was going around was that the government was planning to deploy the military in Kibera to scare away voters,” says Steve Oduor, a Kibera resident who works with Una Hakika, a project that aims to debunk rumors before they can wreak havoc as they did back in 2007.

Oduor says Kibera residents are like everyone else — they tend to believe any news, fake or real, that fits with their personal beliefs.

“If you share something with government supporters that they feel attacks the government, they will be like, ‘no, that’s propaganda, it’s not true,’” he says. “It’s the same thing with those who are on the opposition side.”

However, Oduor says he’s been pleased to see that, in the WhatsApp groups that he is part of, more people are raising questions about the source of information, which he says is a change. He is also seeing more and more people take to social media to spread messages of peace.

“The peace campaigns that are being shared online tell everyone that everything is going to be fine and that we just need to accept what will happen,” Oduor says. “If your candidate loses — well, someone has to lose and someone has to win. That’s been calming people down a bit.”

Oduor, for one, is hoping that, come election day, it’s the messages of peace that will get the most shares.

Correction: A previous version of this article misspelled the name of the rumor-busting project in Nairobi's Kibera neighborhood, Una Hakika.