A man plays music on a traditional musical instrument in the Nubian village of Adindan, near Aswan, southern Egypt. For half a century, Egypt's Nubians have lobbied the government in Cairo for a return to their homelands on the banks of the Nile, desperate to reclaim territory their ancestors first cultivated 3,000 years ago.

Last year, as the Standing Rock protests in the United States were making international headlines, protests by another indigenous minority on the other side of the world to protect its ancestral lands gained much less attention.

In southern Egypt, young Nubian activists led a demonstration against the government’s decision to sell part of what remains of this land — villages in Forkund — to investors for a state-backed agricultural megaproject.

A four-day sit-in ensued on the road between the city of Aswan and the Abu Simbel archaeological site, after authorities stopped protesters from moving toward the area the government had marked for sale.

In a victory for the protesters, in January the government agreed to exclude the over 40 square miles of Nubian land (in Egypt that measures 27,000 feddan) earmarked for development in Forkund — an area about a third of the size of Las Vegas. But their struggle is far from over.

Besides, the protesters’ ultimate objective goes much further, said Mohamed Azmy, who completed his term as head of the General Nubian Union in May, an advocacy group promoting the right of Nubians to go back to their ancestral land. “We want to return back to the old land."

Nubians are descendants of an ancient African civilization as old as Egypt itself, which once presided over an empire and even ruled Egypt. Their historical homeland, often referred to as Nubia, stretches along the Nile covering present-day southern Egypt and northern Sudan.

But since the early 20th century they have suffered waves of displacement as a result of flooding caused by the construction of a series of dams.

The final and most devastating blow was the building of the Aswan High Dam in the 1960s. The vast reservoir of Lake Nasser created by the dam submerged the rest of Egypt’s Nubia, wiping away thousands of years of history.

The human cost was enormous. Around 50,000 Nubians were forcibly resettled in often poorly built homes in the area surrounding Kom Ombo, 30 miles north of Aswan, agonizingly farther away from their beloved Nile. 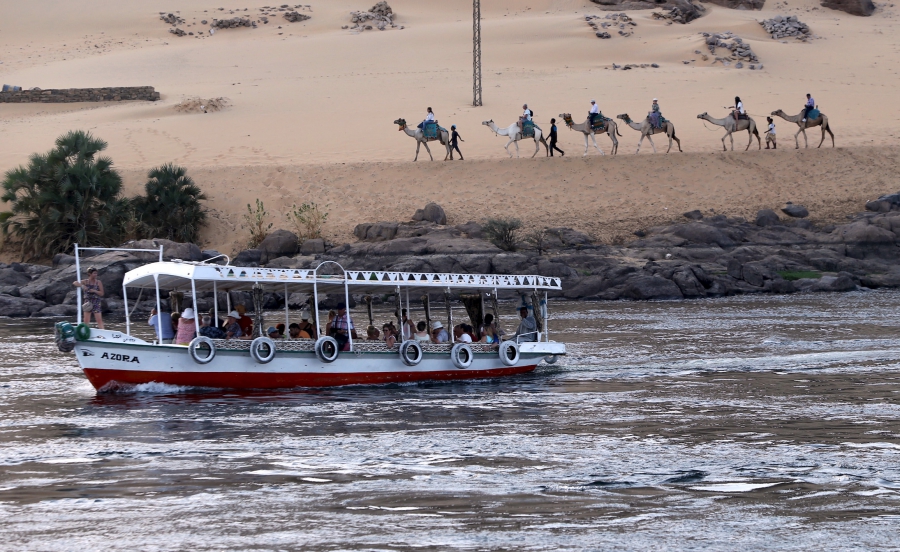 Tourists ride in a falluka (small boat) along the Nile river in Aswan on the way to Nubia, in southern Egypt.

Today all that’s left of old Nubia is a thin strip of land next to the Nile to the south of Aswan, between the Aswan High Dam and the Egypt-Sudan border. Yet many Nubians still long to return, even those settled in the country’s major cities in the north. Older generations of Nubians over the years relocated to Cairo and Alexandria in the search of work. A significant number of Egypt’s Nubians as a result have been born and raised in these cities, like Cairo-born campaigner Sakory.

Many of them have only known their ancestral lands through the stories of their parents and grandparents, and Nubian literature and music mourning their loss.

“Land struggle is a central issue in the Nubian collective identity,” said Maja Janmyr, a postdoctoral researcher at the University of Bergen in Norway.

Darker-skinned Nubians, who have long suffered from discrimination and marginalization, compare themselves to Native Americans. Like them, Nubian identity and culture is inextricably “connected to the land and environment,” especially the Nile, explained the distinguished Nubian writer and veteran activist Haggag Oddoul, himself born and raised in Alexandria.

Activists like Oddoul fear that Nubians’ culture and language, already little used, is being eradicated. They point at successive Egyptian governments’ emphasis on a single, Arab identity and city-dwelling Nubians who have become increasingly out of touch with their roots. “Nubians should have the right to return,” said Oddoul, or face losing their identity. 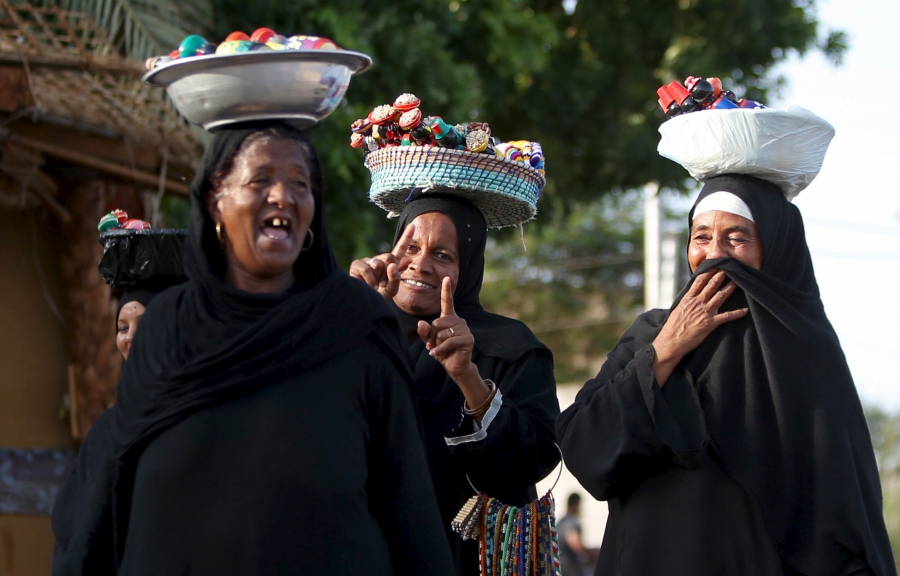 So when an explicit pledge to enable Nubians to return to Nubia within 10 years was included under article 236 of Egypt’s 2014 constitution, that Oddoul helped write, it seemed as though their moment had finally arrived. In September 2014, the government even set up a Committee on the Reconstruction and Rehabilitation of Nubia, to draft a specific law on returning.

Yet three years since the constitution was passed, the committee has been dismissed, the bill has vanished and Nubians’ prospects of returning look as bleak as ever.

One of the committee members said their work was obstructed in part by disagreements with Nubians dwelling in Egypt’s cities, which she said the government exploited.

Manal el-Tibi, a Cairo-based Nubian activist, told PRI that there was a concern that once Nubians regained property rights to their land, the ones living in cities would resell the land and homes in Nubia to non-Nubians instead.

El-Tibi, who is also head of Egyptian Center for Housing Rights — the leading nonprofit on Nubian housing issues across Egypt — said the committee’s solution was to establish housing and agricultural corporations. Anyone selling the land would have to get these bodies’ approval first.

But many Nubians in Egypt’s two biggest cities of Cairo and Alexandria were up in arms over this. They “started to make noise and said, ‘Oh the committee members are selling your rights and compromising your rights,’” she said.

Indeed, some Nubians don’t even think the land is rightfully theirs, like musician Karam Mourad, who has lived in Cairo most of his life. “There’s no problem,” he said. “Nubians want to take everything but it’s not Nubian land, it’s Egyptian land and Nubians are part of Egypt.” 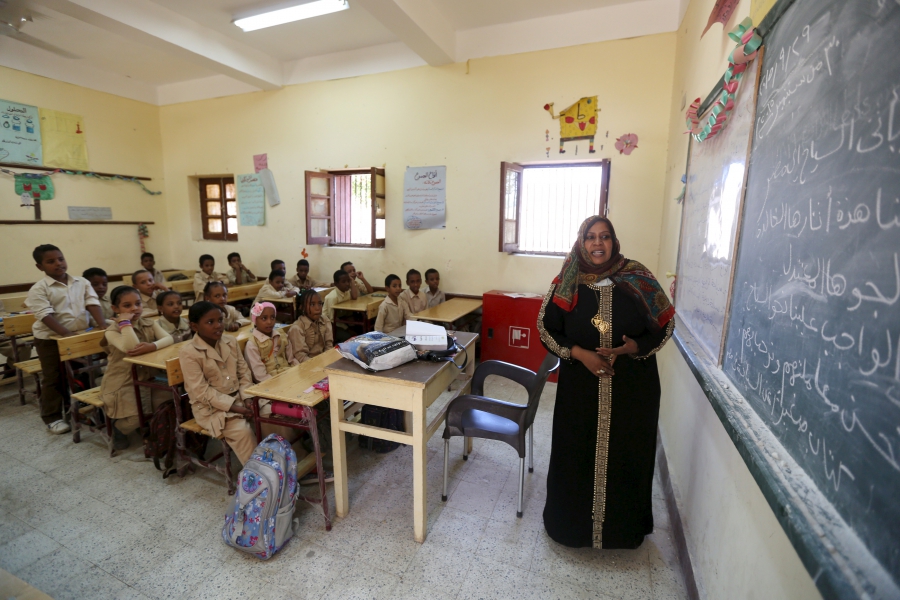 A teacher conducts a lesson at a school in the Nubian village of Adindan.

Other Nubian activists lay the blame for lack of progress on their right of return more firmly on the government.

“I think [the authorities] don’t want Nubians to return,” said Azmy. Fellow activist Sakory agrees the government never intended to deliver article 236, but rather saw it simply as “a way in order to silence the Nubian community” for a while.

Obstructive presidential decrees issued after the constitution was ratified suggest they have reason to question the government’s commitment.

Just two months after the return legislative committee was established, a decree issued unexpectedly by Egypt’s President Abdul Fattah al-Sisi upended their work. It designated many villages Nubians identified for return under new military zones not to be inhabited.

Then another decree last year allocated the Nubian villages in Forkund for an agricultural development megaproject, parts of which the government decided to auction off to investors. Though the government has since promised to exclude Forkund from the project, weary activists don’t expect them to keep their word. 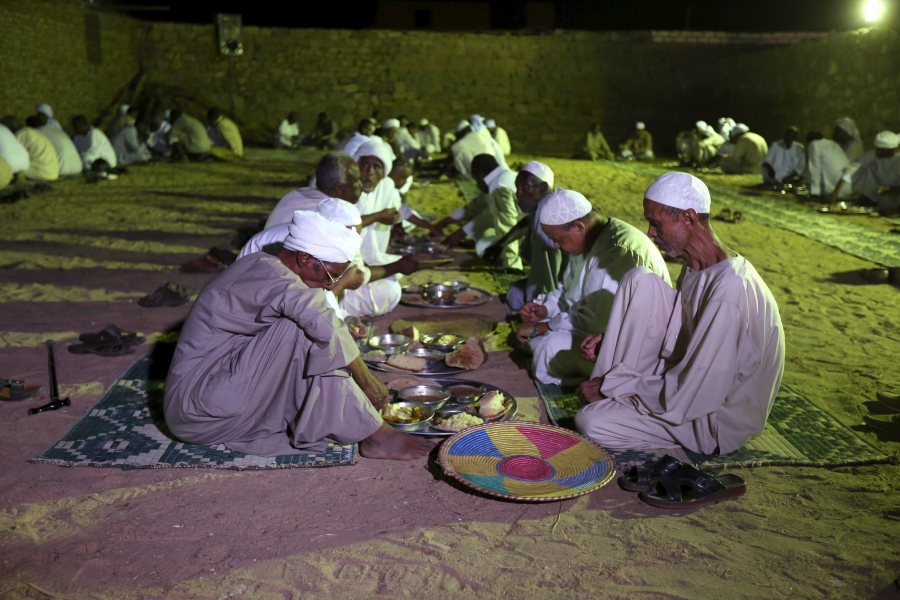 Invitees eat dinner as people celebrate a traditional Nubian wedding in the Nubian village of Adindan on Sept. 30, 2015.

PRI contacted the spokesperson for Prime Minister Sherif Ismail for a government explanation on why there has been no progress on article 236. He is yet to respond to our request for comments.

Paranoia among some officials that Nubians seek an independent state perhaps goes some way in explaining the government’s behavior.

But the current crackdown on human rights in Egypt, which observers say is the harshest in its modern history, has put all rights at risk, including Nubian rights.

And after all, it’s not just article 236 that the government has failed to deliver on, but much of that constitution, novelist Oddoul pointed out.

Exhausted and disillusioned after years of fighting for Nubian rights with little gain, veteran leaders Oddoul and el-Tibi have increasingly taken a back seat. This has paved the way for a new generation of youth activists like Azmy and Sakory, emboldened by their experience of the revolution, to reinvigorate the cause.

Unsurprisingly there’s a “growing sense of hopelessness in which many youth activists feel unable to deal with the government,” said researcher Janmyr. They have decided to take their fight outside to international courts.

“Nubian groups and civil society organizations are currently working on filing an official complaint against the Egyptian government before the African Commission on Human and People’s Rights” over the presidential decrees, Janmyr explained.

The protests over Forkund were not enough for some activists. “We need to pressure all the time,” Sakory said. “We need to internationalize the case as well.”