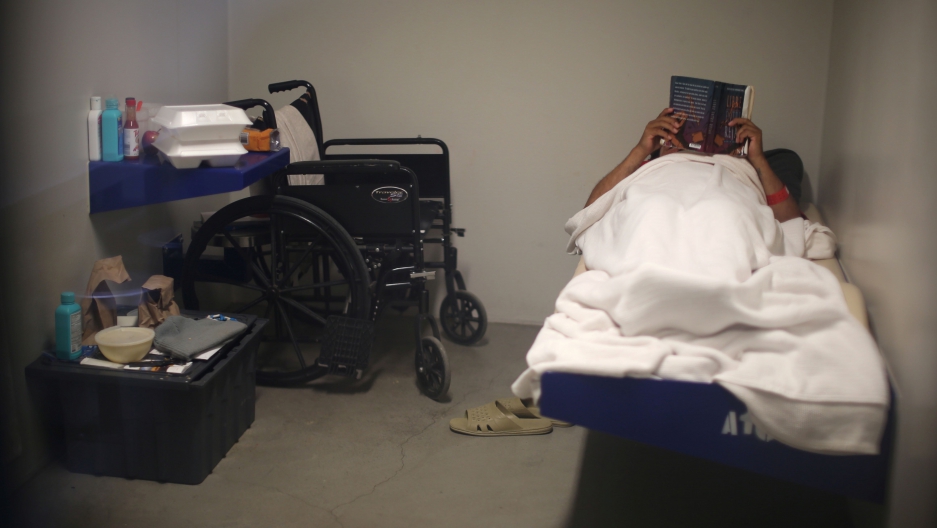 An immigration detainee lies in his cell in the segregation wing at the Adelanto immigration detention center, which is run by the private prison company Geo Group Inc, in Adelanto, California, on May 1, 2017.

As the complicated and messy fight over immigration policy drags on, immigration detention centers are costing American taxpayers billions.

Back in 2009, Congress passed a law that required no fewer than 33,400 immigrant detention beds to be “active” every night. Four years later, that number increased to 34,000 and came to be interpreted as a mandatory minimum. No other law enforcement agency has a similar quota.

In 2013, two congressmen introduced a bill to end the "detention bed mandate." Reps. Bill Foster (D-Ill.) and Ted Deutch (D-Fla.) claimed the quota costs too much, and may adversely influence enforcement protocols. Years later, Foster is still trying to eliminate this mandate.

“There are a number of much less expensive alternatives to detaining immigrants than locking them up somewhere,” says Foster. “It costs roughly $150 per person, per day, to put them in a detention facility. For roughly a tenth of that — somewhere between $17 and 15 cents or 20 cents a day, you can put them into either electronic monitoring programs or community-based programs where people are frequently monitored.”

“There are two different adjustments we can make — one is to simply adjust the number of beds you have ready unconditionally,” he says. "'Beds' are [also] sort of a loose term that includes space in local county jails; there are federal facilities used specifically for detention centers, and there are also for-profit private detention centers.”

The Obama administration tried to phase out for-profit detention centers, Foster says, because the “standard of care” is often subpar in these facilities.

“The for-profit prisons pay less, so they hire out of a different application pool, and they have very high turnover," says Foster. "More than half of the guards at for-profit centers turn over in any given year, and that doesn’t generate a very well-trained force, and a lot of bad things happen to detainees in those circumstances. Unfortunately, when the Trump administration came in, they reversed many of these decisions.”

Given the White House’s promise to crack down on undocumented immigration, Foster says there isn’t much hope for reform, at least for now.

President Donald Trump has prioritized expanding the detention system. One of his first executive orders called on Homeland Security to allocate resources or establish contracts to “construct, operate, or control facilities to detain aliens at or near the land border with Mexico.” Also, Trump’s Department of Justice has said it will resume contracting with private prison companies.

"Discussions with my Republican colleagues, when they acknowledge that there is a correct and rational position on things like climate change or immigrant detention, they say, 'You know, you’re right on this, but I just can’t vote that way in my district,' or, "I would get a primary challenge from the right if I acknowledge what I believe to be the correct and rational position on this,"" Foster says.

Foster says the fight to end the bed quota has morphed largely into a political one.

“On the one hand, they’re voting for something that, objectively looking at it, wastes government money, which is not something that they’re big fans of,” he says. “On the other hand, if they vote to get rid of the detention bed mandate, it opens you up to the attack of being soft on immigration, which, unfortunately, has a lot more teeth in a Republican primary than it does in the rest of the general electorate.”