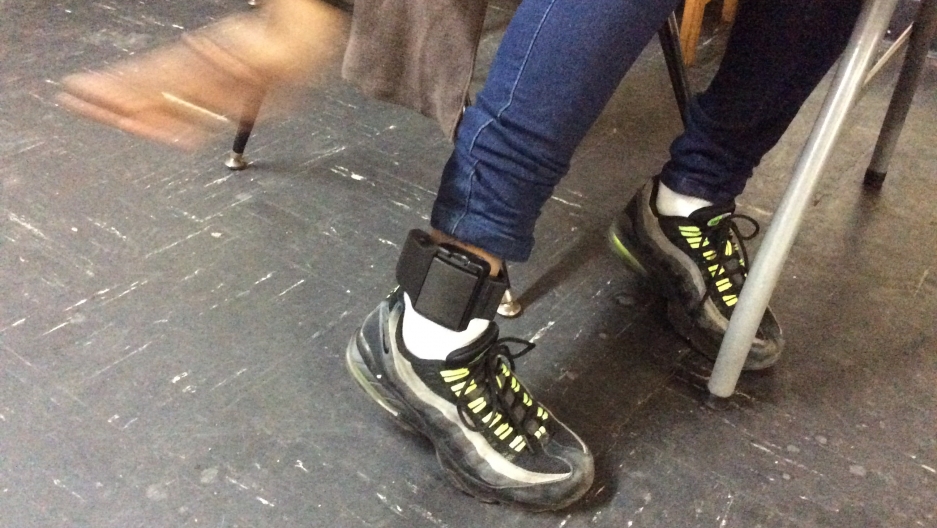 “I feel detained. It’s so humiliating,” says Julia, 31. Many asylum-seeking women who have been released from immigration detention are now facing another form of detention.

Julia’s young daughters run around looking for a plug to recharge the battery for her ankle bracelet. The first one doesn’t work, or the second. What if mom’s monitor goes off? Arany’s face tenses up as she darts toward another wall socket at the far end of the immigration clinic.

“I feel detained. It’s so humiliating,” says Julia, 31, in her native Spanish. Like others who are facing deportation, she preferred we not use her last name.

Julia is Garífuna, an Afro-Caribbean group whose largest community outside of Central America lives in the South Bronx. She fled devastating violence in her homeland. She says that she “would be dead” had she stayed in Trujillo, in Colón, Honduras. She came to the US and is waiting to find out if her request for asylum will be granted.

In the meantime, her every move is monitored by agents of the US government. But it's her job to keep the monitoring bracelet charged.

Arany, 12, finds a place to charge her mother's ankle bracelet before it alerts immigration officials. Her family is seeking asylum; they say they fled violence in Honduras.

The monitoring bracelets are not uncommon in this community; mostly women who are seeking asylum are fitted with GPS-enabled ankle bracelets, receive phone check-ins and surprise home visits by immigration officials.

Julia crossed the Rio Grande with her daughters Arany, 12, and Nazary, 10, early this year. She was apprehended by border patrol agents and taken to the Karnes detention center in Texas, where she was interviewed to assess her eligibility for political asylum.

US Immigration and Customs Enforcement believed she had a reason to be afraid of the violence in Honduras and allowed her to reunite with relatives in the Bronx. But she was still outfitted with an ankle monitor as a condition of her release.

Last summer, California federal Judge Dolly M. Gee ordered the government to free immigrant mothers and children held in custody. That led to a spike in the use of monitoring devices.

Lindsay Harris, a legal fellow with the American Immigration Council, says detained women are often ordered to wear the ankle bracelet when they could have another option: posting bond, often about $1,500. She says disinformation and ICE’s aggressive pursuit of ankle bracelets undermines the process.

“This push to ankle monitors usually means that a woman does not get to exercise her right to a bond hearing, even when [relatives] are able to pay,” she says.

Gregoria Flores runs bi-weekly immigration clinics at the Evangelical Garífuna Church in the Mott Heaven neighborhood of the Bronx. She has placed hundreds of families with pro-bono lawyers since she began her work in 2014. She says Garífuna women need more case workers who can explain the devastating violence that they are fleeing.

Many of the women who come to see her have been through domestic or sexual violence, or they’ve been threatened by gangs or governmental land grabs. Julia and her children were among 24,616 Central American families apprehended at the US-Mexico border from Oct. 2015 through Jan. 2016, according to the US Border Patrol.

Ian Philabaum, a CARA Family Detention Pro Bono Project coordinator in Dilley, Texas, estimates that roughly 6,500 of the families served by their pro-bono lawyers were released from the facility there after the federal ruling. ”Over 90 percent leave [with] an ankle monitor now,” he says.

The Garífuna community is well acquainted with these kinds of alternatives to detention, a long-used federal program that was expanded to manage the surge of Central American families in the summer of 2014. But critics say refugees are being unfairly criminalized. It’s what attorney Harris calls a “flawed interpretation“ of how to comply with the directive to release women and children.

Khaalid Walls, a spokesperson for ICE, replied to CARA’s findings via email. “The agency is reviewing the claims,” he wrote. “ICE takes very seriously the health, safety and welfare of those in our care.”

Concerning the number of families released from detention and the increase in the use of alternatives to detention following Judge Gee’s ruling, Walls said the agency continues to take steps to ensure compliance.

“567 [adults] now residing in the New York metropolitan area, [were] enrolled in [alternatives to detention] as of Nov. 2015. Custody determinations are made on a case-by-case basis,” Walls said.

Women in the Bronx hoping for asylum, however, say that those determinations often continue the persecution.

The Garífuna are descendants of enslaved Africans; the shackles — or grillettes, as they call them — are “very powerful images,” says Kyle Barron, program manager at the New Sanctuary Coalition of New York City, a local interfaith organization. “They really connect with their history of subjugation.”

“I felt como una delincuente [like a criminal],” says Sharon, 20, who arrived during the surge in July 2014 and had to wear an ankle monitor for three months.

She was 18 when she began her journey from Trujillo to reunite with relatives in Mott Haven. She brought her six-month-old baby, 7-year-old sister and 10-year-old niece. The electronic shackle gave her a skin infection; Gregoria Flores helped her to see a doctor and get permission to remove it.

At Dilley, Philabaum says many women have to wear monitors for longer times — more than six months in some cases, despite compliance with immigration proceedings. The monitor appears to have supplanted phone check-ins. 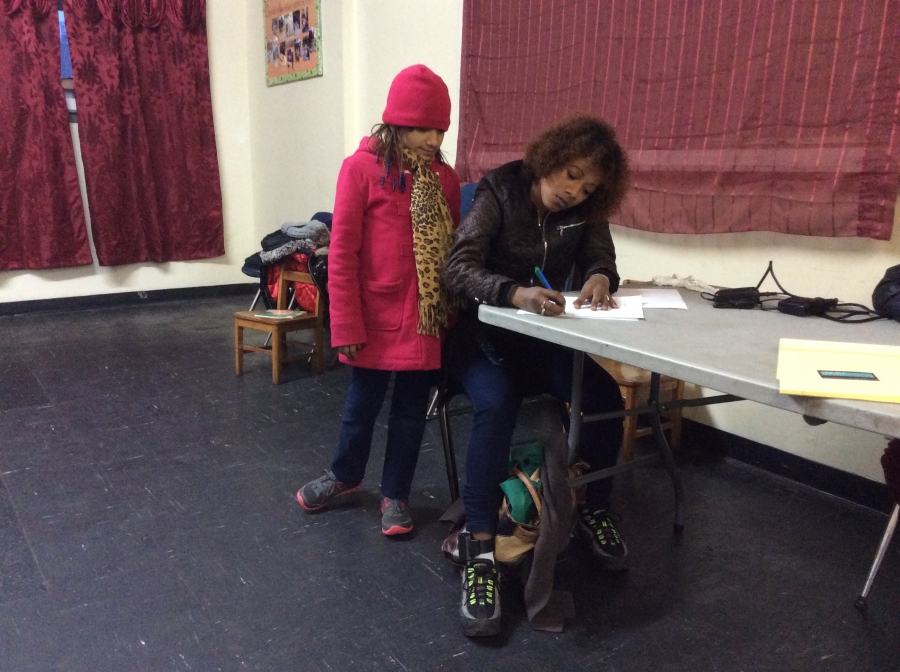 Julia fills out forms at Gregoria Flores' immigration clinic with daughter Nazary. The process can be very complex and many women seeking asylum don't have enough information to properly apply.

Advocates say this kind of monitoring is unnecessary. Data published last year by the Asylum Division of US Citizenship and Immigration Services shows that 88 percent of families who are detained have passed the initial credible fear interview, which puts them on a path to asylum. The chance for legal status is what keeps them from running away, says Barron, not ankle bracelets.

Litza, 28, a Garífuna from Santa Rosa de Aguán, Honduras, says even phone supervision has kept her on edge. She arrived in March 2014 and ICE required her to have voice verification calls. Two years later she cannot work and is afraid of being deported if she misses a call. She never applied for asylum, and the deadline has long passed.

“I didn’t know,” she told Flores when they met in February. Flores told Litza, “ICE only calls to see if you’re still here. They don’t tell you what to do.”

Julia’s first monitor, in the meantime, was giving her electric shocks so she had to have it replaced.

“The new one does the same thing,” she says with a sigh. She does not know the date of her next appointment with immigration officials.