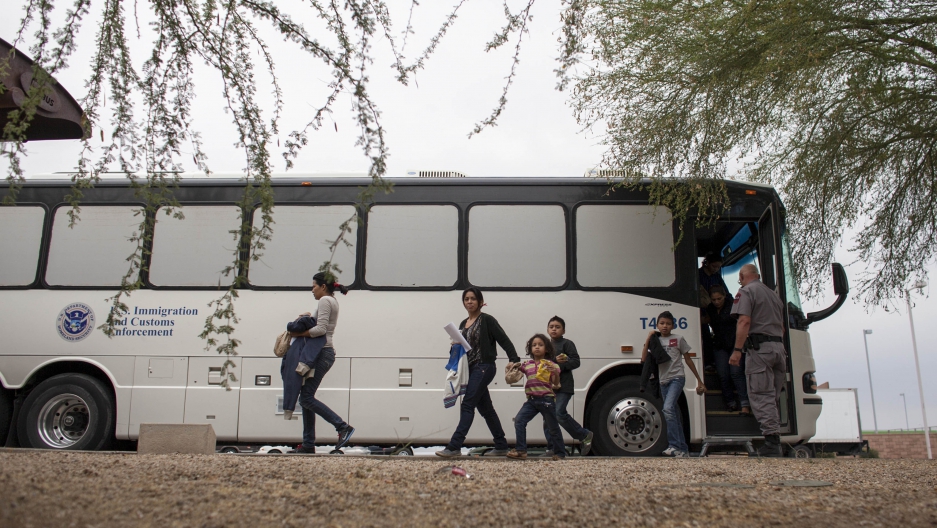 Migrants, consisting of mostly women and children, disembark from a US Immigration and Customs Enforcement (ICE) bus at a Greyhound bus station in Phoenix, Arizona on May 29, 2014. That summer, many migrants from Central America crossed the border seeking asylum from violence in their home countries. Local media reported that ICE had been releasing migrants who pose no security risk at Greyhound bus stations in Tuscon and Phoenix, abd required the migrants to report at ICE offices in 15 days.

Mr. President, as you grow the size and scope of the our immigration enforcement system, will you also grow the capacity of immigration courts to hear and decide on the cases that result?

The 2016 budget for the Department of Homeland Security (PDF) includes:

An advisory committee convened by the Department of Homeland Security last year chronicled a huge increase in the use of private prison companies to detain an ever growing number of people. They noted that the number of people being detained had nearly doubled under President Obama: "Today, in the eighth and final year of the Administration," their report says, "ICE continues to operate the largest system of detention and community release programs in the country with 783,454 migrants from 178 countries in its custody or under its supervision. It also continues to be one of the largest national systems of detention and community release programs with the most highly transient and diverse populations of any detention system in the world."

At one point at the end of 2016, 40,000 people were being held in 637 detentional facilities, according to the Transactional Records Access Clearinghouse (TRAC) at Syracuse University. Others are fitted with ankle monitors or are in other programs to track them.

The budget for our immigration court system, which conducts removal proceedings and is the venue by which people can make their cases for immigration status, by contrast, is about $420 million (PDF). Most of the people who have hearings in the courts do so without attorneys to represent them. Through the end of 2016, the number of pending cases was 533,9090, according to TRAC. (Here's more about that backlog.) There are 291 immigration judges to handle the load.

One of the executive orders Donald Trump signed on January 25 calls for ICE "to the extent permitted by law and subject to the availability of appropriations, take all appropriate action to hire 10,000 additional immigration officers, who shall complete relevant training and be authorized to perform the law enforcement functions." A second order signed that day called on DHS to "allocate all legally available resources to immediately construct, operate, control, or establish contracts to construct, operate, or control facilities to detain aliens at or near the land border with Mexico."

So, Mr. President, our question is will you increase the capacity of immigration courts to handle existing cases and the new cases that will be generated by this very large and growing law enforcement agency? And if not through the courts, how will will you ensure oversight and due process? Click here to tweet the question.