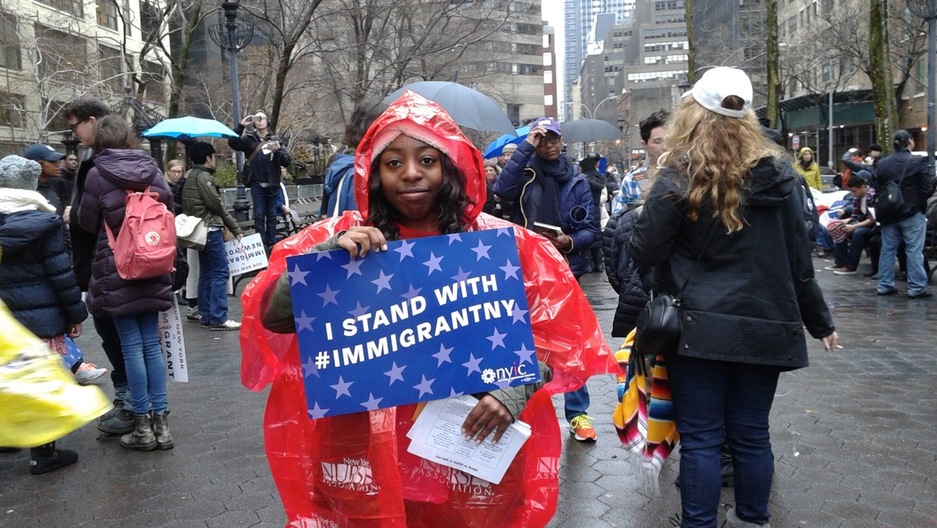 Tekiyah Livingstone, 19, a college student from Staten Island, participated in a rally for immigrant rights in New York City on December 18, 2016. “I want to stand up for something I believe in: For immigration. For everyone,” she said.

No one knows for certain what President-elect Donald Trump will do to keep his pledge to deport millions of unauthorized immigrants when he takes office.

There is, however, a general consensus that removals will rise sharply under his administration. Some states and local governments have made it clear that they won’t wait and see. Whether or not they can stop him, they’re preparing for a showdown.

One battleground will be immigration courts.

In California, where one in four residents was born outside the US and 27 percent of those immigrants are undocumented, Democratic officials introduced several initiatives that could vastly expand immigrants’ access to lawyers. Unlike in criminal courts, immigrants often face judges alone and there is no guarantee of representation, even when people are facing deportation.

Some cities want to change that.

“This is the first salvo, if you will, in the fight against Trump,” says San Francisco Supervisor David Campos.

He and the city’s public defender proposed a bill to allocate $5 million between the public defender’s office and community-based organizations in order to represent the city’s 44,000 undocumented people in courts.

His proposal closely mirrors the New York Immigrant Family Unit Program, which was created in 2013. Deportations rose sharply during the Obama administration. So far, that program has reduced the numbers of people being deported by New York courts.

Resources allocated from the San Francisco mayor’s budget to nonprofits have already been put to use, about half of the budgeted amount, Campos says. Funds for the public defender’s office must still be approved by the city’s Board of Supervisors.

“I think that there’s some reluctance [among legislators] to become too much of a lightning rod,” says Campos. “But, there’s a general sense that we need to do something.”

Campos, who is in his final term and will be replaced by his chief of staff, Hillary Ronen, on January 9, believes that the bill “might undergo modifications, but, it will go through.” 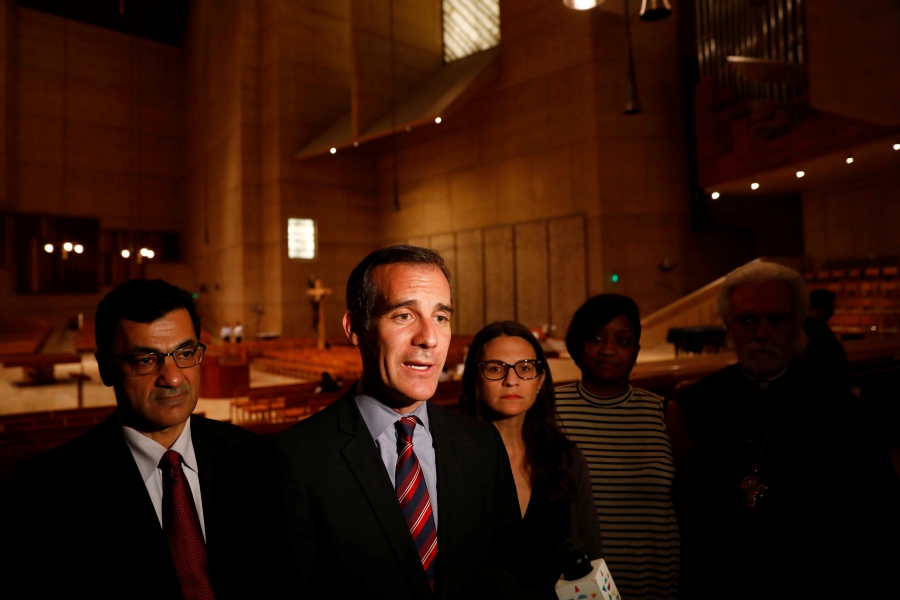 Los Angeles Mayor Eric Garcetti speaks on November 10, 2015 after an interfaith prayer service for the immigrant community following the election of Republican Donald Trump as president. He has created a legal defense fund to give lawyers to immigrants facing deportation.

The City of Los Angeles has its own plan. It joined forces with Los Angeles County and nonprofit organizations to start a $10 million private-public fund for “people who are American by every measure except the papers they hold,” Mayor Eric Garcetti said in a statement.

Meanwhile, California Sen. Ben Hueso and Assemblyman Rob Bonta introduced measures that would direct between $10 million and $80 million to connect the unauthorized population, about 3 million people, to needed counsel and step up legal trainings for immigration attorneys. The bill is facing some challenges by legislators who think it’s too soon to adopt these measures.

Outside California, Mayor Rahm Emanuel of Chicago, announced the creation of a $1.3 million fund in collaboration with the nonprofit National Immigrant Justice Center to support the city’s approximately 150,000 undocumented immigrants. The proposal passed the city council in December.

The president-elect has repeatedly promised to deport undocumented immigrants, with his target number fluctuating between 2 million to all of the more than 11 million people estimated to live in the US with authorization.

“Immigrants in detention are first in line for deportation under Trump,” says Christina Fialho via email. Fialho is the executive director of Community Initiatives for Visiting Immigrants in Confinement, a California-based national nonprofit that advocates for alternatives to immigration detention. “We need our elected officials to act now.”

“We have to stick together,” says Campos in San Francisco, “because, if we don’t stand up to [Trump], then, who’s next?”

In New York, which has been providing representation in immigration courts for several years, advocates are now asking for guarantees that their program will survive the Trump administration. Nisha Agarwal, New York City’s Commissioner of Immigrant Affairs, declined to comment but confirmed that they are in talks to guarantee funding in the city budget, to bypass future negotiations and yearly approval by the city council.

In Chicago, Alderman Nicholas Sposato, who represents the 38th district on the city council, doesn’t appreciate the diversion of more funds to noncitizens. According to reports, he criticized Emanuel for creating "the legal defense fund for the illegals," while homeless veterans and retired city workers could use help with their health care. Alderman Pat Dowell supported the legal fund, but suggested that the same amount of money be spent on behalf of immigrants’ defense should also go to represent African American who are racially profiled by police.

Both the Center for Immigration Studies (CIS) and the Federation for American Immigration Reform (FAIR), organizations that advocate for decreasing the numbers of immigrants in the US, say providing lawyers for immigrants is a poor use of taxpayer dollars.

“It is inappropriate for scarce public funds to be used to pay for representation of illegal aliens fighting deportation,” says Jessica Vaughan of CIS.

FAIR’s media director, Ira Mehlman, echoes Vaughan’s assessment. He says in an email that it would be “far more effective to discourage people from coming and remaining here illegally” than to represent them in court. He says proposals to do so are “consistent with a declared effort to paralyze the federal judicial system.”

Regardless of which legislation is passed or not passed, demand for legal representation among immigrants is on the rise.

“We have seen a sharp increase in the volume of inquiries since November 9,” says Jennifer Friedman, director of Immigration Practice at the non-profit Bronx Defenders, which provides free legal representation to low-income people. “[They] want to know if ICE will come knocking on their door.”

She says her organization is working with the legal community and with city government to prepare for an “onslaught of cases” they are expecting in 2017.

“The thing is, we don’t know what’s going to happen,” says Luis Mancheno, an immigration attorney and fellow at the Benjamin N. Cardozo School of Law, which helped design the New York program to represent immigrants. “People who are permanent residents need to naturalize. It’s your best protection.” On further reflection, he adds, "It is important for people who are eligible to naturalize to consult with a lawyer, because if they don’t and for some reason they are deportable, applying for citizenship is likely to lead them to be placed in deportation proceedings."

This story has been updated to included new information from Luis Mancheno.